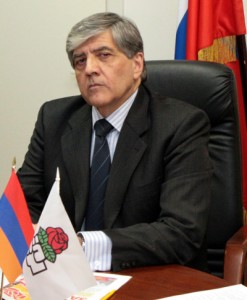 Mario Nalpatian, Co-chair, Socialist International Committee on the CIS, the Caucasus and the Black Sea Region

ARF Bureau member Mario Nalbatian, as Co-Chair of the Socialist International’s Committee on the CIS, the Caucasus and the Black Sea Region had several meetings in Moscow on December 9-10, 2009 with Russian state and political circles. Accompanying Nalbatian was ARF-D Bureau member Levon Mgrtchyan and the director of the ARF-D Moscow office Yuri Navoyan.

On December 9, a meeting was held in the upper chamber of the Russian parliament with Alexander Podlesov, member of the Federation Council, co-chair of the Standing Committee on International Relations and the Just Russia party’s council chair on foreign relations.

That same day, ARF-D representatives met with the head of the Just Russia party faction in the State Duma, Nikolay Levichev.

The ARF-D delegation initially expressed its sympathy to their Russian counterparts regarding the terror attack days earlier on the Russian rail system and the fire in Perm, which took the lives of over 100 people. During the meeting, the sides discussed Armenian-Russian relations, the development of bilateral cooperation between the two political parties and future cooperation within the Socialist International (SI).

Mario Nalbatian spoke about the Socialist International’s position regarding pressing global issues including climate change, the protection of the environment, the fight against terrorism, and conflict resolution. He noted that these issues, to varying degrees, are also prevelant in the CIS and cooperation between parties should be guided towards their resolution.

Nalbatian also spoke about the future plans of the SI committee, which he co-chairs. He informed his interlocutors that the next session of the committee will take place in Yerevan and invited the Just Russia party to actively participate in the activities of the committee.

The Armenian side placed importance on the Just Russia party receiving observer status in the SI a year earlier, something which the ARF-D, as the only full member from the CIS, had been instrumental in. The ARF-D representatives said that the Russian party’s involvement in the global socialist movement would help secure the entrenchment of socialist ideals in the CIS countries.

For their part, the Russian parliamentarians expressed their concern with the presence of tension in their neighborhood. In this regard, they said that they were alarmed by the latest pronouncements of the Azerbaijani president who is calling for a military solution to the Karabakh conflict; they considered this to be an unacceptable approach during the negotiation process.

Regarding cooperation within the Socialist International, the Russian side appealed to the ARF-D with a specific request as a political power who holds the positions of a vice president and a co-chair of the regional committee in the SI to assist them in securing their request of hosting the next SI Council in Russia and also to assist them in receiving consultative status in the international organization.

The sides also discussed an upcoming forum to take place in Moscow with the participation of socialist parties from the CIS and the involvement of the Socialist International in this endeavour. The forum will be hosted by leader of the Just Russia party and Speaker of the Federation Council, the upper chamber of the Russian parliament, Sergey Mironov.

The ARF-D delegation expressed its ideas and approaches regarding the objective and organizational matters of the forum. The representatives of the ARF and the Just Russia party agreed to continue working toward finding and securing partner parties from CIS countries and to establish cooperation with them.

Mario Nalbantian suggested that they take into consideration the growing cooperation between Russia and Latin American countries and to further develop these relations between Just Russia and socialist parties from those countries. The Russian side accepted this suggestion with gratitude.

On December 10, the ARF-D delegation met with Union of Young Socialists of Russia, the Justice League Youth Movement, Russia’s Student Union and o 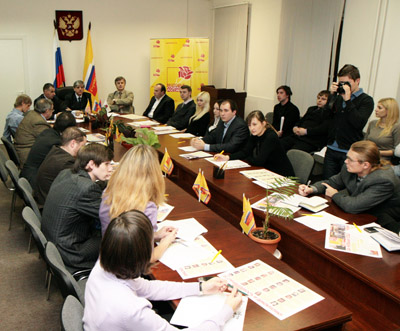 Meeting with representatives of youth and student unions

ther representatives from youth organizations. Mario Nalbantian delivered a speech and answered questions from the young participants. Nalbantian gave a historical overview of the Socialist International, its current activities, its structure and working principles. He also discussed the activities of the ARF-D within the SI and global cooperation.

The representatives of the Russian youth organizations were interested in the relationship between Socialist International and trade unions; the outlook of left movements in different regions and pressing international issues. There was special interest regarding the International Union of Young Socialists (IUSY) and its membership on behalf of the young participants.