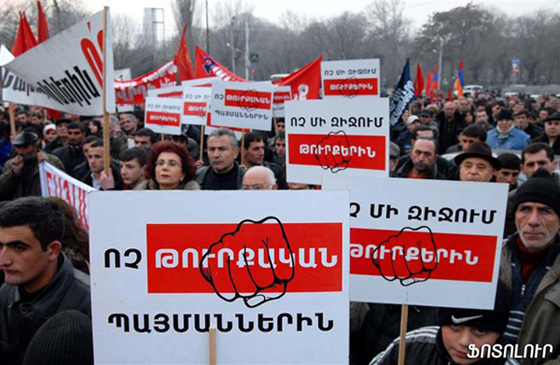 Thousands marched on January 11, 2010, to Armenia’s Constitutional Court during a demonstration organized by the Armenian Revolutionary Federation-Dashnaktsutyun, urging the high court to invalidate the Armenia-Turkey protocols.

The Constitutional Court is scheduled to begin hearings onon January 12, 2010, the Armenia-Turkey protocols to rule whether they conform with the Armenian Constitution, before they are submitted to the National Assembly for ratification.

The key contentions are the preconditions inherent within the documents, the approval of which will only benefit Turkey and severely curtail Armenia’s ability to push forward a national agenda based on national interests.

The ARF-Dashnaktsutyun contends that the protocols, in their current format, would hinder the process of garnering international recognition of the Armenian Genocide, force Armenia into recognizing the current Armenia-Turkey borders and bind the Armenia-Turkey normalization process with the resolution of the Karabakh-Azerbaijan conflict.

The demonstrators, bearing torches and the signs reading “No to the Protocols” marched to the Constitutional Court building, where they submitted a nine-page letter delineating their demands from the court.