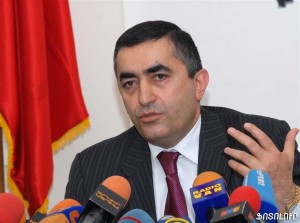 The Armenian Revolutionary Federation-Dashnaktsutyun confirmed on Friday that one of its leaders has met with Constitutional Court Chairman Gagik Harutiunian and urged him to block the implementation of Armenia’s controversial agreements with Turkey.

According to Armen Rustamyan, chairman of the Dashnaktsutyun organization in Armenia, Vahan Hovannesyan, a member of the ARF-D Bureau and head of the party’s parliamentary faction, met Harutiunian. Rustamyan insisted that the meeting was not secret and did not signify continuing cooperation between Dashnaktsutyun and the government, as portrayed by a top representative of the rival opposition Armenian National Congress (HAK).

“I consider such meetings very normal,” he said, adding that Hovannesyan only wanted to “convince” Harutiunian that the controversial protocols on the normalization of Turkish-Armenian relations are unconstitutional.

“We can’t just hold demonstrations outside the Constitutional Court,” Rustamyan told a news conference at the “Hayatsq” press club. The head of Armenia’s highest court “acknowledged our concerns as such,” he said.

The Constitutional Court is scheduled to start on January 12 hearings on the protocols’ conformity with Armenia’s constitution. ARF-Dashnaktsutyun plans to launch a new campaign of protests against what it considers a sellout of Armenian national interests ahead of the hearings.

A positive court verdict is a necessary condition for the ratification of the protocols by the Armenian parliament. Harutiunian raised eyebrows in October when he accompanied President Serzh Sargsyan on an early intercontinental trip aimed at promoting the Armenia-Turkey protocols in major Armenian communities abroad. Harutiunian insisted afterwards that he took part in the trip in his private capacity and that his participation will not compromise his impartiality during the planned court hearings.

The Armenia-Turkey process can be considered a failure, Armen Rustamyan, chairman of the Armenian parliament’s Standing Committee on Foreign Relations, told the reporters wrapping up the the year’s event.

The Turkish Parliament is unlikely to ratify the Armenian-Turkish protocols, he said. “Even if it does, it does not at all mean that the Armenian side must follow the example,” Rustamyan said. He pointed out the documents need revising.

The ARF-D leader and Armenian Parliament member believes the process is out of Armenia’s control now. “It is neither Armenia nor the international community that is setting terms now. It is Turkey,” he said. The statement made by Vigen Sargsyan, Deputy Head of the RA Presidential Staff, that Armenia with invalidate its signatures if Turkey fails to ratify the protocols by next April should be viewed in this context. “The only way for Armenia is to pull out of this process unless the Armenian authorities agree to a settlement scheme proposed by the ARF-D,” Rustamyan said. He pointed out that it is a ratification with reservations that is in question.

Rustamyan is sure that Turkey “calculated its success.” “Turkey is now presenting the negotiations to the international community as a concession on her part: it was allegedly in defiance of Azerbaijan’s interests that they agreed to negotiations with the ‘aggressor’. Armenia, for its part, has not done anything for the West to realize the fact that, after many years of blockade, Turkey must reopen the border,” Rustamyan said.

Regarding his recent working visit to the USA, Rustamyan spoke of his meetings with members of the US Congress and representatives of the Administration, to whom he has presented the preconditions being put forth by Turkey for the ratification of the Armenia-Turkey protocols. Rustamyan has also stressed that if the USA is really in favor of Armenia-Turkey relations without any preconditions, then the right course would be for the US House of Representatives to adopt HR 252 affirming “the United States Record on the Armenian Genocide.”

On the issue of Mountainous Karabakh, Rustamyan’s assessment is that the results in 2009 have been negative. He explained that the December 1 announcement by the heads and representatives of the foreign ministries of Armenia, Azerbaijan, Russia, France and the US meant that Armenia has agreed that Republic of Mountainous Karabakh will not participate in the negotiations until the basic principles for the conflict resolution are accepted by Armenia and Azerbaijan. “If Karabakh will not participate in the formulation of the basic principles, which is the fundamental issue, then all this is really a farce and just a formality. We have repeated time and again, that Armenia cannot replace Karabakh. Armenia can represent Karabakh’s interests, but can never replace it, especially in the issue of status, in the issue of security, in the issue of territories, in the issue of refugees.”

Referring to the tasks the ARF-Dashnaktsutyun will carry out in 2010, Rustamyan said that they are many. The ARF-D leader stressed that with the realization of the fundamental and systemic reforms that the ARF-D has proposed and is pursuing, there will be a completely different Armenia and a completely different political system.