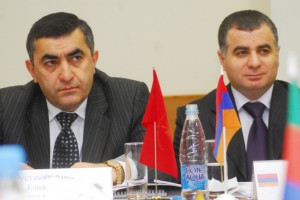 YEREVAN – The forum of socialist and social-democratic parties of the CIS entitled, “Our Common Objective is Justice and Solidarity,” took place in Moscow at the President Hotel on February 8.

Delegations from eight CIS countries representing 14 political parties participated in this forum. Seven of those parties have observer status at the Socialist International; only the ARF-D is a full member of that organization.

Representing the ARF-D at the forum was Armen Rustamyan, chairman of the ARF-D Supreme Council of Armenia and Yuri Navoyan, director of the ARF-D office in Moscow.

Sergey Mironov, president of the Just Russia party and chairman of the Senate of the Russian Federation made welcoming remarks. He noted that having experience in bi-party, bilateral and international cooperation, socialist parties of the CIS have come to a mutual understanding that relying on the mutual interests of their respective countries, and taking into consideration economic, historic and cultural factors and generalities will contribute to subsequent development and cooperation between our states.

Armen Rustamyan, chairman of the ARF-D Supreme Council of Armenia, in his remarks welcomed the invitation for the forum. He emphasized the importance of such a gathering, taking into consideration the aberration of the concept of socialism in CIS countries, in particular, and from the aspect of crystallizing and aiding the process of bilateral integration of the underdeveloped ideological foundations of political structures.

Rustamyan noted that the international socialist movement also stood to gain by the consolidation of ideologically compatible parties in the CIS. He stressed that the mission of the forum must be realized without being contrary to the by-laws and objectives of the Socialist International and must keep in step with the international socialist movement. By underscoring this objective the ARF-D subsequently signed the joint statement issued by the forum with reservation. 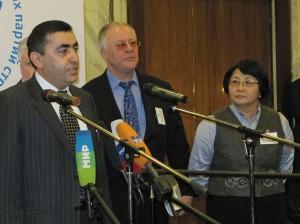 Armen Rustamyan speaking to the media

For subsequent cooperation, the representatives of the political parties participating in the forum considered party building, the realization of the exchange of experience in legislative processes and electoral structures, the widening of the trade union movement, and the development and support of cooperation between youth and other social organizations as important factors. Some party representatives placed importance on achieving political competitiveness and issues of aiding the freedom of the press.

Presenting the political crisis in their country, having the constitution and the laws serve one family or individual, the Azerbaijani delegates, in particular, considered it expedient that modern mechanisms be developed through the authority of the forum for those countries where a democratic culture has not yet emerged

The forum participants were unanimous that civil society and cooperation between political parties are necessary in order to resolve certain issues. In this regard, it was symbolic that it was the socialist powers who expressed the willingness to call for solidarity and cooperation. Bilateral cooperation will also fortify this dialogue that has been initiated by socialist parties.

It was decided to periodically hold these kinds of forums.

The forum issued a statement about the objectives of cooperation between socialist and social democratic parties in the CIS, its directions and the steps necessary to realize them.