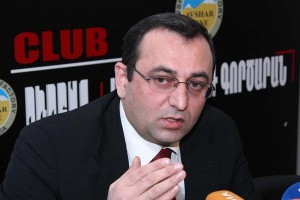 The recurrent “taxing package,” submitted by the Armenian Government for discussion by the National Assembly of Armenia last week, was criticized not only by representatives of the opposition but also by some pro-government MPs. The Government particularly has not managed to ground the draft on Making Amendments and Addenda (providing communities with a privilege to define eight types of local taxes) to the RA Law on Taxes.

Taking into consideration the NA deputies’ stormy discontent, the bill that was put to first reading on February 3, NA Speaker Hovik Abrahamyan suggested delaying the voting of the package for 15 days.

On February 8, Artsvik Minasyan, NA deputy from the oppositional Armenian Revolutionary Federation (Dashnaktsutyun) Party, said the draft amendment conflicts with other laws on the books and also that the new classifications would create additional burden for the public and especially the socially vulnerable.

“Tax is the money paid the State for carrying out a definite economic activity. Why must a tax be paid for something that is not done,” Minasyan asks, naming the taxes on incomplete construction and on the uncultivated lands to be used for agricultural purposes.

Minasyan is sure that this is a draft law having a clear political context.

“I do not exclude that this way the authorities try to provide additional levers and means of influence for heads of communities, who are always involved in the formation of falsifications during elections,” Minasyan says.

“They may define such a high tax so that rallies simply do not take place any more in the future,” Minasyan concludes.