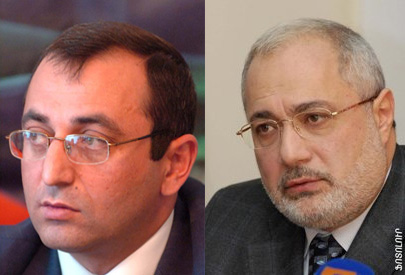 After meeting with fierce resistance from lawmakers, the Armenian government has heavily watered down a controversial bill that would empower local self-government bodies to set and collect new taxes.

A package of corresponding amendments to three Armenian laws was submitted to the National Assembly early this month. It envisaged eight “local taxes” that could be introduced by the elected administrations of cities, towns and even villages across the country. In particular, they would be able to determine and levy extra duties from retail trade, incomplete construction sites and agricultural land not cultivated by farmers.

Local community budgets have until now been mostly filled with proceeds from regular land and real estate taxes. Their rates are determined by the central government and endorsed by the parliament, however.

The proposed amendments were strongly criticized by not only opposition lawmakers but also members of the parliament’s pro-government majority, including speaker Hovik Abrahamian. They dismissed government arguments that the amendments will strengthen local self-governance and said that a heavier tax burden would hurt the Armenian economy. The criticism forced the government to withdraw the bill.

A watered-down version of the bill was sent the National Assembly last week and approved by it in the first reading on Monday. Local governments will now be allowed to tax only hotels and parking lots located in their communities.

Abrahamian and other parliament majority leaders spoke out in favor of the bill, effectively predetermining the outcome of the vote. They argued that the government made sweeping changes in it.

Still, 20 deputies, most of them representing the opposition Armenian Revolutionary Federation (Dashnaktsutyun), voted against the measure. Vahan Hovhannesyan, the leader of Dashnaktsutyun’s parliamentary faction, said the fact that the government promptly dropped most of the tax proposals means that it is “not serious” about the matter. “We want to see a complete package,” he said.

Another senior Dashnaktsutyun lawmaker Artsvik Minasyan says that the introduction of these types of taxes is not grounded economically, socially, nor politically or legally.

“There is no estimation that would substantiate the expedience and economic impact of the introduction of these types of local taxes. But socially it becomes an additional burden in [economic] crisis conditions,” said Minasyan. He accused the Armenian government of doing everything to drive self-employed people and small entrepreneurs out of business. “Some people seem to like the model of economic monopolies,” says Minasian. “They are trying to gain dominant positions in every sphere. This is the third degree of oligarchy … The government does not even deny that and claims, while presenting just about every bill to the National Assembly, that that will lead to [business] consolidation.”

Vahan Hovhannesyan says that while his faction supports the strengthening of local government bodies, but oppose the mechanisms that will be applied.

“We have all witnessed how local leaders use their freedom – heads of poor villages buy expensive SUVs, do expensive repairs in their offices, forgetting about the needs of the village. You’ve given them this freedom and do not want to limit it. And now you want to add a larger budget to this ‘freedom’,” says Hovhannesyan, criticizing the measure supported by the governing coalition members.