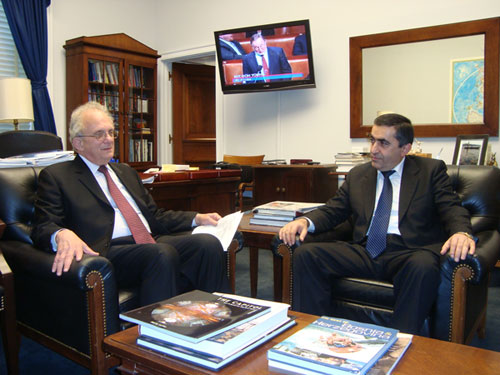 Ignoring stern warnings from Ankara, a key committee of the U.S. House of Representatives narrowly approved on March 4 a resolution that recognizes the 1915 mass killings of Armenians in Ottoman Turkey as genocide and urges President Barack Obama to do the same.

Turkey condemned the committee vote and recalled its ambassador to Washington “for consultations.” “We condemn this resolution accusing Turkey of a crime that it has not committed,” the Turkish prime minister’s office said in a written statement reported by “Hurriyet Daily News.”“Our Ambassador to Washington Namik Tan was recalled tonight to Ankara for consultations after the development.”

Howard Berman, the Democratic chairman of the House Foreign Relations committee and a strong backer of the resolution, put it to a vote despite reported pressure from the Obama administration. The White House said U.S. Secretary of State Hillary Clinton telephoned Berman on March 3 to warn that the legislation could harm efforts to normalize Turkish-Armenian relations.

“The vast majority of experts, academics, authorities in international law and others, who have looked at this issue for years, agree that the tragic massacres of the Armenians constitutes genocide,” Berman said, opening a committee debate on the politically sensitive bill.

The California lawmaker acknowledged that Turkey, which vehemently denies any premeditated effort to wipe out the Ottoman Empire’s Armenian population, is a “vital ally” of the United States. “Be that as it may, nothing justifies Turkey’s turning a blind eye to the reality of the Armenian genocide,” he said.

Opponents of the resolution warned that Turkish retaliation against genocide recognition could deal a serious blow to the ongoing U.S. military missions in Iraq and Afghanistan and lead to the closure of a key U.S. military base in southeastern Turkey. They said the resolution’s passage could also undermine the implementation of the Turkish-Armenian agreements. Some of them emphasized the fact those agreements call for the formation of a Turkish-Armenian inter-governmental panel that would look into the events of 1915.

But Berman dismissed such arguments. “The Turks say passing this resolution could have terrible consequences for our bilateral relationship and, indeed, perhaps there will be some consequences,” he said. “But I believe that Turkey values its relationship with the United States at least as much as we value our relations with Turkey.

“And I believe the Turks, however deep their dismay today, fundamentally agree that the U.S.-Turkish alliance is simply too important to get sidetracked by a non-binding resolution passed by the House of Representatives.”

The ensuing committee vote lasted more than 90 minutes. Visiting parliamentarians from Armenia and Turkey as well as representatives of the Armenian and Turkish communities in the U.S. present at the proceedings waited anxiously as U.S. legislators took their time voting for or against the genocide bill. It was passed by 23 votes to 22.

“The truth prevailed in the end,” Elizabeth Chouldjian, a spokeswoman for the Armenian National Committee of America, told the Yerevan-based Yerkir-Media television. “The Turkish pressure proved futile.”

While approval by the Foreign Affairs Committee was indispensable for progress of the resolution, prospects for its discussion and adoption by the full House of Representatives anytime soon remain uncertain. The committee already backed similar bills in 2000, 2002 and 2007. But strong pressure from the previous U.S. administrations prevented them from reaching the House floor.

It was also not immediately clear just how the development will affect the implementation of the Turkish-Armenian agreements. Ankara warned before the vote that the genocide resolution would make their ratification by Turkey’s parliament even less likely.

In a statement issued earlier on March 4, Armenia’s Foreign Minister Edward Nalbandian denounced his Turkish counterpart Ahmet Davutoglu’s reported remark that the Turkish government could easily ensure the ratification if it wanted to. “Thus, Turkey is admitting that it has been artificially dragging out the ratification process,” he said. “This is a clear breach of our understandings.”

Following the U.S. House Committee meeting, Armen Rustamyan, Chairman of the Standing Committee on Foreign Relations of the National Assembly of Armenia (and Chairman of the ARF-Dashnaktsutyun Supreme Council of Armenia), wrote to Chairman Howard Berman, extending his committees’s “heartfelt appreciation for the House Foreign Affairs Committee’s markup of the Armenian Genocide Resolution (H.Res.252), yesterday.”

In his letter, Rustamyan states: “We greatly appreciate your efforts and the efforts of all those who voted in favor of the resolution. The Committee has set the stage for the resolution to be considered by the full U.S. House of Representatives.

“I wish to reiterate our complete support for the adoption of this measure affirming the commitment of the United States to the cause of genocide-prevention. As we have discussed during our meeting in Washington, D.C., Armenia aspires for the universal recognition and condemnation of the Armenian Genocide, and sees it both as a restoration of historical justice and as a way to improve the overall situation in the region, while also preventing similar crimes in the future.”

Rustamyan goes on to state: “I am confident that the proponents of this process are also rightly convinced that the lack of affirmation of U.S. official recognition of the Armenian Genocide has thus far in fact served to make Turkey’s position in the issue of resolving the Armenian-Turkish relations more uncompromising. I am confident that the affirmation of U.S. recognition of the Armenian Genocide not only would not hamper, but on the contrary will contribute to the prospects of a thorough dialogue between Turkey and Armenia. On this issue we do differ with the recent announcement made by Secretary of State Hillary Rodham Clinton, that ‘it is [not] for any other country to determine how two countries resolve matters between them, to the extent that actions that the United States might take could disrupt this process.’ In fact, Armenian Foreign Minister Edward Nalbandian immediately issued a statement saying, ‘We highly appreciate the decision by the Committee on Foreign Affairs of the United States House of Representatives to adopt Resolution 252 on the recognition of the Armenian genocide. This is another proof of the devotion of the American people to universal human values and is an important step toward the prevention of the crimes against humanity.’

“A clear and principled stance by the U.S. can only assist in developing awareness that the recognition of the Genocide is not at all a demonstration of anti-Turkish sentiments, but a necessity emanating from the need to condemn this crime against humanity. Furthermore, any durable improvement of Armenia-Turkey relations must rest upon a foundation of shared respect for truth and justice. Finally, President Serzh Sargsyan and his administration have time and again declared, that any kind of relations with Turkey cannot put into question the veracity of the Armenian Genocide and the fact that the Armenian people have been dispossessed of their homeland, and the necessity to have these facts recognized and condemned by all of humanity. Also, contrary to Secretary Clinton’s assertion, the President of Armenia holds the position that ‘the relevant sub-commission to be established under the [Armenia-Turkey] intergovernmental commission is not a commission of historians.'”

Rustamyan concludes: “We are convinced that the adoption of H.Res. 252 by the U.S. House of Representatives will be the best testament, on the one hand, to the fact that the recognition and condemnation of a crime against humanity has a universal value and should not be solely a matter of bilateral relations, and, on the other hand, would reiterate that for the United States normalization of Armenia-Turkey relations should take place without preconditions, including the precondition set by Turkey regarding recognition of the Armenian Genocide.”