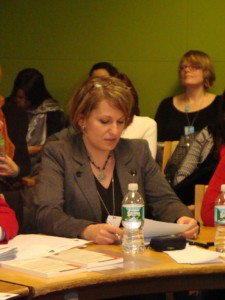 Beijing + 15 – What Next?
Fifty-Fourth Session of the Commission on the Status of Women (CSW), United Nations, New York, 1 – 12 March 2010
Panel discussion hosted by the Permanent Mission of Greece to the United Nations in cooperation with the Socialist International Women

The Declaration and Plan of Action that was born from the Fourth Conference on Women in Beijing 15 years ago in 1995, outlined areas of critical concern for women.
Some of those concerns – the persistent and increasing burden of poverty on women; inadequate conditions of health; violence against women; the effects of armed conflict on women; inequality in economic structures, policies and in access to resources; inequality between men and women in the sharing of power and decision-making at all levels; insufficient mechanisms at all levels to promote the advancement of women; and lack of respect for and inadequate promotion and protection of the human rights of women, continue to persist in developing and emerging democracies of the former Soviet Union.

Many countries that underwent Communist revolutions or were “sovietized” granted women equal rights and benefits in one stroke, often long before women in Western societies obtained such rights. However, this Soviet legacy has served as an impediment to the advancement of women. Because gender parity was ideological and imposed during the Soviet era, with independence, women were relegated back to their traditional, culturally-defined roles, which have marginalized their involvement in all aspects of public life, governance and conflict resolution.

With the collapse of the Soviet Union, economic reforms by the former Soviet republics included cuts in social programs such as government-funded child care. In addition, unemployment caused by these economic reforms has affected more women than men. The smash and grab capitalism of the early 90s in transition countries, which led to huge transfers of public wealth to private hands created a chasm between the rich and the poor. This concentration of wealth accumulation led to the current neo-liberalist policies of the ruling elite rampant in the region where everything is up for sale to the highest bidder. Women were left out of the game, their access to resources severely limited.

Challenges facing women in the CIS differ from those in other developing regions of the world because the transition period still continues – causing instability, inconsistent development, insecurity, etc.

The shift from authoritarian rule to democracy did not automatically bring with it justice and equality – most people in the region believed that these would naturally occur. Societal conditions worsened and today, most regions in the CIS continue to grapple with ethnic strife and tension – displacement, economic adversity, dismal living conditions, migration, violations of rights, poverty, etc.

Labor market discrimination, domestic violence, and other forms of inequality and oppression continue to be serious impediments to the progress of women’s rights. While their current status and situation derives from Soviet society, women face a reality quite different from their past.

Problems women face is quite regional; gender patterns in some parts of the CIS may not be present in other parts. Significant differences in development patterns between men and women reflect the different demographic trends in the region.

These problems have been compounded by the global financial crisis.

According to a UNDP report in 2009, development progress in the CIS has declined as a direct result of the global economic and financial crisis. The Millennium Development Goals Report states that in almost all areas, the two groups of countries that are part of the CIS – one in Asia and the other in Europe – have experienced a very different pace of progress.

Cultural traditions and norms, stereotypes and expectations of gender roles have placed societal pressures on women and their role in all aspects of society. This is a trend that is very apparent in the three countries of the South Caucasus – Georgia, Azerbaijan and Armenia. Gender issues here, as in most transition countries, can be viewed as part of a broader issue of values or value-systems. As long as violations of human rights are prevalent, then gender rights and equality will continue to be compromised.

In the overriding majority of transition countries or newly independent states of the CIS, promoting and calling for gender equality was and is viewed as something imposed by international aid agencies which will destroy culture, traditions and the classical view of the family. And in the South Caucasus, the subversion of women is viewed as part of Caucasian mentality.

The South Caucasus has had its own particular share of crippling problems, from ethnic strife, war, economic volatility, and political turmoil.

The effects of wars in the region – the Armenia and Azerbaijan war over Nagorno Karabakh, and the recent Russian-Georgian war has created new pressures. Tensions still run high and there is an absence of any dialogue on the level of civil society. A dangerous arms race has led to unacceptable levels of military spending causing further strain.

And yet, while women have been greatly impacted by these continuing tensions, they also continue to be significantly underrepresented in decision making positions that influence peace-keeping, preventive diplomacy and peace negotiations. Women’s role can help promote non-violent forms of conflict resolution and reduce the incidence of human rights abuse in conflict situations.

Fifteen years after Beijing, which broke new ground and helped set a global agenda, women in the CIS continue to be underrepresented in all forms of governance and decision-making bodies.

However, Beijing also helped shape global perceptions, and responsibilities which have left their mark in transition countries – the three countries of the Caucasus have all adopted national action plans on the status of women and are now taking steps, albeit tentative ones, towards addressing some of these issues.

Beijing + 15: What is next for Transition Countries?

1.Domestic violence was one of the critical areas of concern included in the plan of action and a persisting problem in the region. It is imperative to examine and highlight the economic costs of violence against women: by analyzing the financial impact on business, the state, societal groups and individuals, it can emphasize the need for including domestic violence within the criminal codes of these transition countries, (currently only Georgia includes domestic violence in its criminal code) seek budgetary allocations for programs from awareness to prevention. These analyses will illustrate the cost of violence against women within the court system, health care pressures, and social service costs.

2.Increase the participation of women in conflict resolution at decision-making levels. Work to reduce excessive military expenditures. Strive to create conditions, through international mediators or third parties to convene meetings between civil society organizations, to help create dialogue and discourse. Women’s groups can have a monumental influence on conflict resolution processes – they have been victims of torture, rape; they have lost fathers, husbands and sons in armed conflict regardless of their nationality. These common bonds can lead to dialogue which can help forge a future where neighbors can live together in peace.

3. Implementing the Beijing Platform for Action is mainly a responsibility of governments, but also of public institutions, the private and civil society sectors at the community, and national, regional and international levels. The Platform acknowledges that significant progress will depend on building strategic partnerships and involving all stakeholders in the efforts towards change. Therefore sharing experience between women who have been able to register significant advances in terms of gender parity, addressing and combating of domestic violence with women in transition countries can serve to set a new regional agenda. Bridges of knowledge and expertise must be built through bilateral and multilateral cooperation.

4. Investing in Women: a new discourse must be developed in transition countries of the CIS. Governments in partnership with Civil Society organizations dealing with gender issues and international structures need a broader and more comprehensive agenda for mobilization. Women’s role in decision-making bodies must be at the forefront. In the South Caucasus, women’s representation in parliament is dismal: 11.4 percent in Azerbaijan, 8.4 percent in Armenia and 5.1 percent in Georgia. While women were very active during the national liberation movements of their countries in the early 90s, today their roles have reversed to a more traditional one, respective cultural stereotypes playing a negative role in their participation in political processes.

5. Women as Actors: “Women are not passive targets of policies or the victims of distorted development – they are shapers and makers of social change.” The perception of rigid gender roles must be shattered through social mobilization and political will. It is true that in this region, women’s social positions have implications for their consciousness and activism; however a broad, global agenda can help mobilize women to find their voice and begin to see themselves as true shapers and makers of social change. This needs to come about through a transfer of knowledge, awareness and seeking to dismantle negative cultural images and representation of women.
Democracy, the protection of human rights, freedom of speech and social justice are values and instruments that can help create an atmosphere where women will have their place in society. Fifteen years after Beijing, in an ever-changing and fast paced world, women and men, governments and civil society, the affluent and the disadvantaged must continue striving to eliminate all forms of discrimination against women, must adhere to a global agenda which must be broad enough to address region-specific issues. Global organizations like the Socialist International Women have a tremendous role to play – I have seen the impact of their policies and mission, which have helped my country to begin the process of progressive change for women.