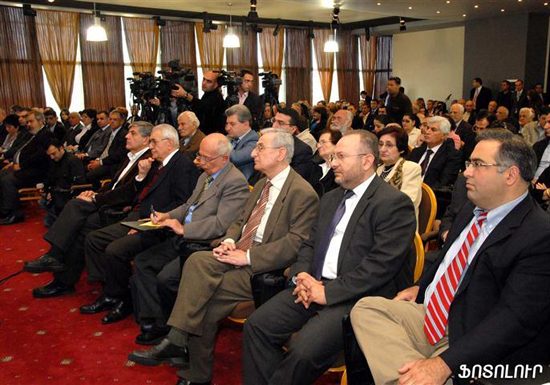 A conference of the “Hay Daht” (Armenian Cause) committees of the Armenian Revolutionary Federation-Dashnaktsutyun was held May 6-9, 2010, in Yerevan and Stepanakert.

The conference kicked off at the Erebouni business center, with the participation of “Hay Daht” committee representatives from throughout the world, as well as representatives of Armenian political parties, NGOs and public figures. 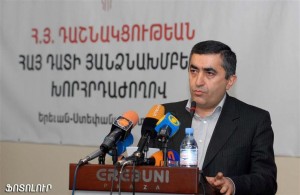 Mkrtchyan explained that the aim of the conference was to unify all national forces in Armenia, Karabakh and the Diaspora in order to tackle national challenges based on a single national agenda. In his welcoming remarks, Mkrtchyan warned of Armenia’s adversaries and their efforts to strengthen their voice and presence in different countries and the imperative to counter those efforts.

At the official opening session, ARF-D Bureau member Hagop Der-Khatchadourian echoed Mkrtchyan’s call to action against anti-Armenian forces lobbying against Armenian interests. He noted that the Armenia-Turkey protocol process adversely affected efforts to attain international recognition of the Genocide. Der-Khatchadourian stressed the importance of engaging international analytical centers and think tanks. The Bureau member emphasized the need for continued activism to preserve and protect the right of Armenians in Javakhk.

In his remarks at the opening session, ARF-D Supreme Council of Armenia chairman Armen Rustamyan spoke of the evolving geopolitical situation in Caucasus. “The dynamically changing geopolitical situation in the region incites new challenges entailing the following question: how many independent states will there be in the South Caucasus?” said Rustamyan, explaining that until the Russian-Georgian war the South Caucasus were perceived as a three-nation region. With the addition of Abkhazia and South Ossetia to the mix, that equation changed to a “3+2” model. The inclusion of the Nagorno-Karabakh Republic would make it a “3+3” equation, which would properly characterize the current geopolitical reality of the South Caucasus region. 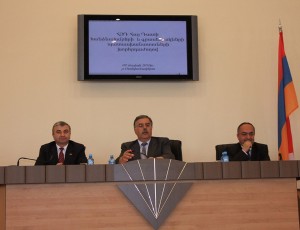 Rustamyan added that Turkey was aspiring to play a larger role in the region. “If Turkey gets involved in regional developments, Iran should also be given the chance to maintain the balance,” said Rustamyan.

In Yerevan, the conference heard reports on the activities of the “Hay Daht” committees and offices during the previous three years. The conference also discussed the achievments and challenges regarding the international recognition of the Armenian Genocide, as well as issues of reparations for the Armenian Genocide. Also discussed were the issues of countering anti-Armenian activities and propaganda by Azerbaijan and Turkey, as well as supporting the Armenians of Georgia, and especially of Javakhk in Georgia, in their quest for basic human and political rights. 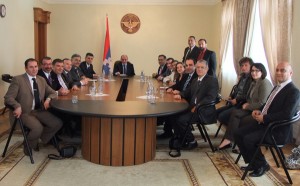 President Sahakyan praised the activities of the “Hay Daht” committees around the world and emphasized the need to focus on the various aspects of the Karabakh conflict resolution process, especially the international recognition of the Mountainous Karabakh Republic and encouraged expanding cooperation with Karabakh authorities in that realm.

MKR National Assembly speaker Ashot Ghulyan attended the last session of the conference, which was held at the National Assembly and chaired by ARF-D Bureau member Hagop Der-Khachadourian. Ghulyan presented the posturing of official Stepanakert and the work ahead in the current phase of the conflict resolution process. Ghoulyan said that under any circumstances are the veracity of the Armenian Genocide and Karabakh’s right to self-determination to become topics of bargaining, adding that the Mountainous Karabakh Republic must become part of the negotiation process. 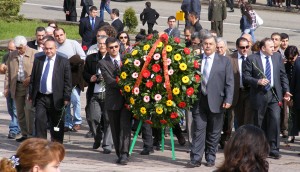 Laying of the wreath at the Unknown Soldier's Tomb in Stepanakert

The second main speaker at the session was Armen Sargsyan, leader of the ARF-D faction in the MKR National Assembly. The two sides also discussed the need to dispel the myth that returning liberated territories would lead to peace. In fact, it was concluded, making concessions in that sphere increases the chance for resumption of war. 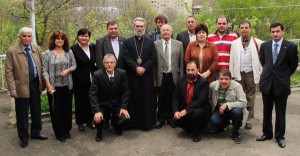 With Archbishop Pargev Martirosyan in Shushi

In Shushi, the “Hay Daht” delegation also met with Artsakh Primate Archbishop Pargev Martirosyan, who briefed his guests on the activities of the Karabakh Diocese.
Participants of the “Hay Daht” conference also took part in celebrations marking the 18th anniversary of the liberation of Shushi and the 65th anniversary of WWII victory over Nazi Germany.