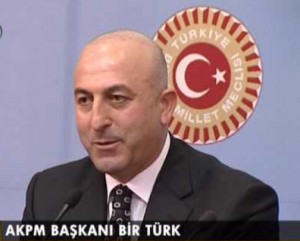 More as a Turkish politician than the President of PACE.

The Armenian Revolutionary Federation-Dashnaktsutyun announced Tuesday that it will boycott all meetings and events related to Wedenesday’s visit by Mevlut Cavusoglu, the president of the Parliamentary Assembly of Council of Europe, citing the leader’s expressed refusal to visit the Genocide Memorial Monument.

“Our parliamentary faction has learned that Mevlüt Çavusoglu, President of the Parliamentary Assembly of the Council of Europe (PACE), has expressed a desire to meet with the Armenian Revolutionary Federation (ARF-D) faction of the National Assembly. However, we have also learned that Mr. Çavusoglu refused to participate in the protocol visit to the Memorial to the Victims of the 1915 Genocide. We believe that this does not befit the leader of a major international organization,” said the ARF-D parliamentary faction Tuesday in a letter addressed to Parliament Speaker Hovik Abrahamyan.

“Previous PACE presidents have never allowed themselves to show such a disrespectful attitude, despite whether or not their own countries had recognized the Armenian Genocide,” continued the letter.

“In this case, Mr. Çavusoglu seems to have no reservations in revealing the fact that he is here to a lesser extent as PACE President and to a greater extent as a politician from Turkey. Given this situation, our faction considers it unsuitable to meet with him.” concluded the letter.

Chairman of the parliamentary commission on foreign affairs, the ARF-D’s Armen Rustamyan explained that the Armenian authorities gave in to Cavusoglu’s request and changed what was supposed to be an “official” visit to a “working” one.

Rustamian, who is part of Armenia’s delegation to PACE, announced that he would not attend the delegation meeting scheduled to take place during Cavusoglu’s visit.