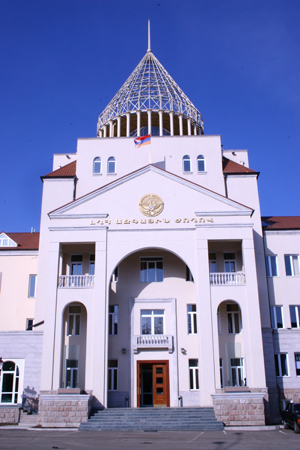 The parliament building of the Mountainous (Nagorno) Karabakh Republic

While campaigning for the upcoming parliamentary elections in the Republic of Mountainous (Nagorno) Karabakh (MKR), ARF-Dashnaktsutyun (ARF-D) leaders Armen Sargsyan and Vahram Balayan met with students and administration at the University of Artsakh. The leaders stated that ensuring the security of Nagorno Karabakh and the living conditions of its population are a priority for the ARF-D. Sargsyan and Balayan noted that future generations of a victorious people must live a worthy life.

Vitali Balasanyan, a non-ARF-D member who is included on the party list for the parliamentary elections had meetings in the district of Askeran in MKR. He discussed the current round of negotiations regarding the resolution of the Karabakh conflict and underscored the necessity of having MKR return to the negotiating table. He emphasized the importance of the territorial integrity of Artsakh, stability in the region and the ensuring of peace. Balasanyan noted that territorial concessions to Azerbaijan would only increase the risk of a resumption of war. He went on to say that historically and legally Mountainous Karabakh belongs to the Armenian population who has always lived on those lands.

Parliamentary elections in the Mountainous Karabakh Republic will take place on May 23, 2010. Four political parties are vying for 17 proportional party seats in the National Assembly – the Azat Hayrenik Party, the Democratic Party of Artsakh, the MKR Communist Party and the Armenian Revolutionary Federation-Dashnaktsutyun. There are also another 16 majoritarian seats up for grabs.

Over one hundred observers, including members of parliaments of Argentine, Russia and Armenia, from over ten countries are follow the elections.