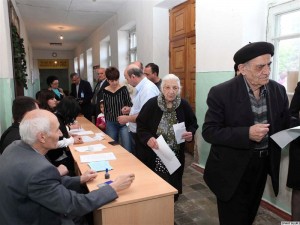 STEPANAKERT — More than 70 percent of eligible voters in the Mountainous (Nagorno)-Karabakh Republic flocked to the polls on May 23 to elect a new parliament—the fifth legislature since the declaration of independence.

More than 124 international observers from 14 countries and around 30 reporters from international media were present for monitoring or covering the elections in which four political parties with a total of 82 candidates on their slates were vying for 17 proportional seats in parliament. The other seats in the 33-seat body were contested by 44 candidates in single-mandate constituencies. The legislature in the Mountainous Karabakh Republic is elected for a five-year term.

The final results published by the Karabakh Central Election Commission (CEC), on May 26, showed Karabakh Prime Minister Ara Harutiunyan’s Free Fatherland party as winning the vote with some 46 percent, which translates into 8 out of the 17 porportional seats. Parliament speaker Ashot Ghulyan’s Democratic Party of Artsakh received 29 percent of the vote (5 proportional seats) and the Armenian Revolutionary Federation-Dashnaktsutyun garnered over 20 percent of the vote (4 proportional seats). The Communist Party failed to clear the six-percent hurdle, which is required under Karabakh’s election laws to enter the legislature.

On the single mandate front, two ARF-D candidates Armen Sargsyan and Kamo Martirosyan won the elections in their respective districts, 11 and 16 respectively.

“It is a pleasure to live in a country that supports democratic values. And democracy is a value for us, along with independence and sovereignty,” said Mountainous Karabakh Republic President Bako Sahakian after casting his vote on Sunday.

“Together with our people the [newly elected] National Assembly should be working towards achieving great successes in Karabakh’s recognition,” he added, emphasizing the Karabakh’s commitment to democratic norms and principles.

Similar views were echoed by Yerevan, where Armenia’s Foreign Minister Eduard Nalbandian said the elections attest to the commitment by the authorities and the people of the Mountainous Karabakh Republic to democracy and the rule of law.

“The recognition of the right of the people of Mountainous Karabakh to determine their own fate is at the core of the proposals presented by the OSCE Minsk Group Co-chairs,” said Nalbandian.

“In the matter of settling the Karabakh problem the international community should be primarily interested in dealing with authorities elected by the people of Karabakh,” stressed Nalbandian, adding that with the latest elections “the citizens of the Mountainous Karabakh Republic once again have proved their resolve to express their will to live freely and independently.”

As expected, Azerbaijan decried the elections and its foreign ministry claimed that the parliamentary elections would adversely impact the peace process.

Reactions from Moscow, other capitals and the OSCE Minsk Group co-chairmen indicated that the elections, even if not recognized, would not hinder the ongoing peace process.

“In Moscow we do not think that the course of the Karabakh peace process could depend on the holding of elections in Karabakh,” Andrei Nesterenko, a Russian Foreign Ministry official representative, said on May 24.

“Russia supports Azerbaijan’s territorial integrity as well as other fundamental principles of international law,” he added. “As is known, we do not recognize Nagorno-Karabakh as an independent state. We believe the future status of Karabakh must be determined without the use of force and within the framework of the Minsk Group, as a result of political negotiations involving all parties.”

“Although the Co-Chairs understand the need for the de facto authorities in NK to try to organize democratically the public life of their population with such a procedure, they underscore again that Nagorno-Karabakh is not recognized as an independent and sovereign state by any of their three countries, nor by any other country, including Armenia. The Co-Chairs consider that this procedure should not preempt the determination of the final legal status of Nagorno-Karabakh in the broader framework of the peaceful settlement of the Nagorno-Karabakh conflict,” said the US, French and Russian co-chairs of the OSCE Minsk Group in an announcement issued on May 24.

The OSCE Chairman-in-Office, Kazakhstan’s Foreign Minister Kanat Saudabayev, echoed the Minsk Group chairmen’s response and emphasized that the elections would not impact the peace process in a statement issued in the capital Astana.

Days before the elections, on May 21, the European Union’s foreign policy chief, Catherine Ashton, warned that the parliamentary elections are not recognized by the EU as being legal. Ashton said in a statement that the vote “should not prejudice the peaceful settlement of the Nagorno-Karabakh conflict” and urged all parties to redouble efforts to find a negotiated solution to the conflict.

Armenian President Serzh Sargsyan, during a conference with Jose Manuel Barosso, the President of European Commission, in response to a question underscored that Mountainous-Karabakh votes its authorities though legal elections for two decades.

“During those years, different organizations, including the European Union declare that they don’t recognize those elections, which is strange for us, but we try to find motivations.”

At the same time President asked to pay attention on another side: “We’re sure the elections have no alternatives,” President said, “Hence we think it’s normal the people of Mountainous Karabagh is able to organize transparent and democratic elections.”

“Armenia thinks improving the participation and role of Mountainous Karabakh legal authorities in the negotiating process will be granted new quality. The parliamentary elections and the assessments of many foreign observers are evidence to the fact that the people of Mountainous Karabakh can have modern democratic state which can have civilized ties with its neighbors.”