A delegation representing the Armenian Revolutionary Federation-Dashnaktsutyun (Armenian socialist party) attended the third congress of the Patriotic Union of Kurdistan party, in the city of Suleimania, in the Kurdistan region of Iraq.

Attending the openings session of the congress, which marked the 35th anniversary of the party, were PUK Secretary General and Iraq’s president Jalal Talabani, Iraqi Kurdistan leader and chairman of the Kurdistan Democratic Party Masoud Barzani, Iraq’s prime minister Nouri al Malaki, as well as representatives of political parties, diplomats and delegations.

Also attending the conference were a delegation of the Social Democratic Party of Sweden, headed by its chairperson Mona Saline, Socialist International Women’s president Pia Logatteli, a representative of the French Socialist Party and Turkey’s pro-Kurdish Peace and Democracy Party representatives.

In his remarks, Talabani welcomed, among others, the ARF-D’s participation in the meeting. 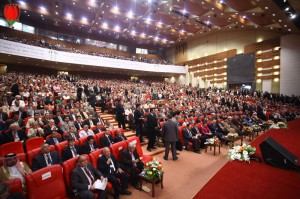 On behalf of the Chairman of the ARF-Dashnaktsutyun (Armenian socialist party), I salute all participants of the Third General Congress of the Patriotic Union of Kurdistan commemorating the party’s 35th anniversary.

As members of the Socialist International both our parties have a number of common ideals and common goals; among others peace, security and understanding between nations.

The theme of the present congress, “Strength through unity,” is not only emblematic for the future well-being of the badly hit communities composing present-day Iraq, but also very important for the relations between the peoples of the region, particularly the Kurdish and Armenian peoples; there is a long common history of those two very ancient entities living side by side during the last three millennia in this part of the world, cradle of the most original world civilizations.

The common experience of our two nations indicates clearly that each time we were opposing each other we have both suffered severely and each time we have cooperated we have been able to defend our rights at least partially. The lack of continuity in a common policy has had catastrophic consequences; Armenians have been subjected to genocide, which is until this date denied recognition by its main perpetrator, whereas Kurds have postponed indefinitely the realization of their right to statehood; this very autonomous region of Kurdistan within Iraq has given at last a hope for real self-government.

The tragic lessons taught by modern history have to guide us in our future relations. Unity is in fact a precondition for strength. Strength is an instrument of war but at the same time an instrument of peace. On the other side peace is a stable condition only if it is based on justice. Let us agree, that our common space has been and is an arena where social, political, historical injustices are still awaiting for a solution.

Therefore, we fully accept the validity of the theme of the present General Congress wishing you a full success.

Manoyan: Iraqi Kurdistan will be a catalyst

Armenian Weekly editor Khatchig Mouradian asked Manoyan about his impressions of Iraqi Kurdistan and the visit. Below are excerpts of their conversation:

“We were one of the four or five international party delegations, along with the delegations from the Social Democratic Party of Sweden, the Socialist Party of France, the Democratic Society Party from Turkey, and the president of the Socialist International Women,” Manoyan said. “At the opening session of the Congress, there were many diplomats representing diverse countries, from Iran to the United States. The 3rd Congress coincided with the 35th anniversary of the founding of the PUK. The congress was held in Suleimanieh, a city of over 750,000 people and the power base of the PUK. There is only one Armenian family left there. All during our visit, the PUK treated us and the other delegations as VIPs. For example, at the dinner of the first evening, we were seated at President Talabani’s table.”

Erbil and oil diplomacy
“To visit the region we had flown to Erbil (or Hewler, in Kurdish), the booming capital of the Kurdistan region. Here is the seat of the region’s government, which is led by Prime Minister Barham Salih, one of the leaders of the PUK. However, the president of the Kurdistan region is Massoud Barzani, the leader of the Kurdistan Democratic Party (Iraq), which holds the majority in the region’s legislature. Because there are Armenians living in different parts of the Kurdistan region, they have a member of the regional legislature. Those who saw Dubai 25-30 years ago say that is how Erbil looks now: expanding horizontally and vertically, with very many foreign companies investing in the region or taking up the offers by the region’s government for massive construction and development, thanks to the oil that is the main—if not the only—revenue of the region. Turkey is used as the only transportation route for oil. So, it is not surprising that, when we were in Erbil, President Barzani paid a five-day official visit to Turkey and met with the president, the prime minister, and the foreign minister, as well as Turkish business circles.”

“Ankawa is a growing suburb of Erbil. Ankawa’s population is predominantly Assyrian/Chaldean. Ankawa is becoming the home of Armenian families moving there from other parts of Iraq. Now there are around 150 Armenian families there and they have started organizing community life. We, along with the Iraqi Armenian community leaders visiting Baghdad, met with some of them,” he said.

“I think the Kurdistan autonomous region of Iraq is a region not to be disregarded by Armenians and Armenia, because besides the business opportunities it represents, I believe it will be one of the catalysts in the region, which really is in Armenia’s neighborhood,” Manoyan added.