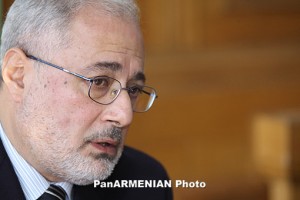 The Armenian police and a leader of the Armenian Revolutionary Federation-Dashnaktsutyun have traded barbs over the contentious use of force against opposition activists trying to gather in a popular square in Yerevan.

Vahan Hovannesyan, a member of the ARF-D Bureau and leader of its parliamentary faction, last week publicly challenged the official justification for the police actions against several dozen supporters of another major opposition force, the Armenian National Congress (HAK).

Hovannesyan specifically scoffed at a June 1 police statement saying that a group of “unknown individuals … tried to enter Liberty Square” and had to be reined in by law-enforcement officers. He argued that the square is an open public area which anyone can enter without an identity check.

In a statement on Monday, the police press service accused Hovannesyan of distorting police reports on violent confrontations with young HAK activists. It pointed to another police statement that said the activists were not allowed into the square because they planned to stage unsanctioned protests there.

“I am amazed that our police have become so pettish and irritable,” Hovannesyan countered on Wednesday, denying any wrongdoing.

“I am not obliged to keep all police statements under my pillow,” he told journalists. “It was clearly stated [by the police] that ‘unknown individuals, breaching public order, tried to enter Liberty Square.’ And unknown individuals do have the right to walk in our city.”

“If it was said that those unknown individuals were drunk, hurled abuse, harassed women or children and threw bottles as they tried to enter the square, we all would see a violation of the law and agree that the police actions were right. When that is not said, we start thinking that the entry itself is deemed a violation.”

“They should lecture not me but those who write their statements,” added Dashnaktsutyun’s former presidential candidate.