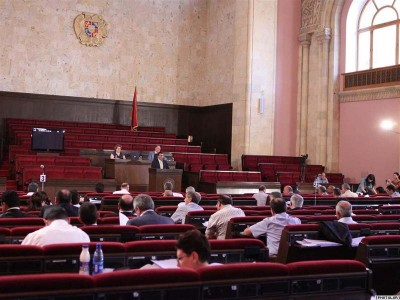 The Armenian government pushed through parliament on Thursday its controversial legal amendments allowing the existence of foreign-language schools in the country.

The National Assembly adopted them in the first reading by 71 votes to 13, with one abstention, amid continuing protests staged outside the parliament building by the most vocal opponents of the measure.

A leader of the assembly’s pro-government majority indicated that the authorities will not rush to have the bill adopted in the second and final reading and are ready to make additional changes in it.

Galust Sahakyan, a senior deputy from the ruling Republican Party of Armenia (HHK), told the media that the final parliamentary debates on the issue will not take place before this autumn. The government and parliament majority are ready to consider “new proposals” from all “interested parties,” he said.

“The key thing is not to harm our native language and the linguistic mentality of Armenian children but at the same time to make sure we can integrate into the world’s educational systems,” said Sahakyan.

The government has already twice watered down the amendments to Armenian laws on public education and language in the face of fierce criticism from opposition groups, prominent intellectuals and other public figures who regard them as a serious threat to Armenia’s sole official language.

The current version of the bill allows only two full-fledged foreign-language schools in the country. They must be privately owned and located in two resort towns.

Despite these and other restrictions, the parliament’s two opposition factions representing the Armenian Revolutionary Federation (Dashnaktsutyun) and the Zharangutyun Party voted against the bill. Their representatives stood by their demands that the government make no changes in the language.

They insisted that a limited number of foreign-language schools can operate in Armenia even without such changes. Dashnaktsutyun’s Artsvik Minasian said the language law, which upholds Armenian’s dominant status, must be kept intact for “national security” considerations.

Sahakian hinted that the government might accept such a compromise solution.