By Nanore Barsoumian
The Armenian Weekly

At 8 p.m. on July 13, television viewers in Turkey who tune in to watch Haberturk TV station’s “Teke Tek” (“One to One”) debate show will instead see a program prepared by the Turkish state’s television and radio monitoring agency, the RTUK. 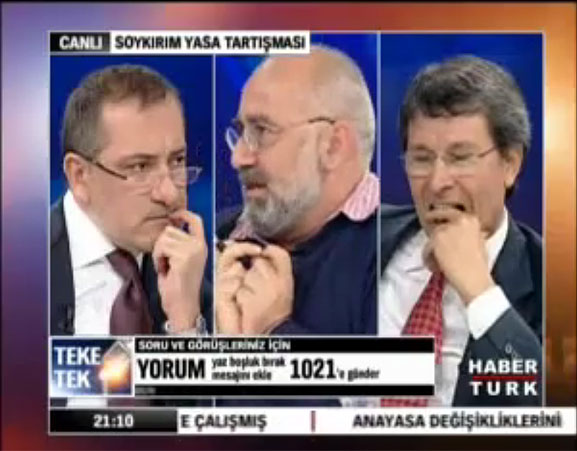 Teke Tek is a debate program hosted and moderated by Fatih Altayli. The two guests on the March 9 episode were Yusuf Halacoglu, the former president of the Turkish Institute of History and a notorious genocide denier, and Sevan Nisanyan, an Armenian-Turkish linguist, writer, and lecturer, and columnist for the Turkish daily Taraf and Armenian Agos newspapers. Nisanyan recently published a book titled The Country that Forgets Its Name, a study on around 30,000 place names in Turkey and their Turkification.

During the March 9 debate, Nisanyan said, “Terrible events happened in 1915. A whole society who had been living here for thousands of years was expelled from their home country and was subjected to tyranny and injustice. … The state policies in Turkey say that this is a lie and that they do not care about our feelings. I think these policies have softened a little throughout the past two to three years. At least, they stepped back from completely ignoring it. But when we look at recent speeches of the government, we see very clearly that the basic mentality has not changed.”

Nisanyan’s comments were, according to the RTUK, overly critical and “humiliated the Republic of Turkey.” The RTUK decision to fine the station and cancel the July 13 showing of Teke Tek was made on June 15 (June 16 by some accounts) and Haberturk was informed of it on June 21. The notification of the punishment was signed by Arslan Narin, the RTUK’s legal advisor.

According to the Turkish bianet.org, which monitors and covers media freedom issues in the country, the July 13th program by the RTUK will be preceded by an announcement and explanation of Teke Tek’s suspension, along with the display—at 10-minute intervals—of the official laws that have been broken. 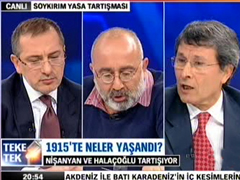 The RTUK cited Article 4(i) of Law No. 3984 and No. 4756, which forbid broadcasters to “exceed the limits of criticism and insult an institution,” and which, according to Reporters Without Borders (RSF), is worded in such a vague manner that it allows officials to draw “subjective—usually ultraconservative—interpretation that prevents Turkish society from tackling vital issues.”

Habeturk has the right to appeal the case with the Administrative Court.

The Armenian Weekly asked Nisanyan to share his reaction to the RTUK’s decision. “The Turkish Old Guard is desperate,” he said. “There is whole regiment of mostly elderly apparatchiks who are simply shocked by the changes taking place in the country, and they are reacting in mostly incoherent and irrational ways.”

“The program I took part in would be simply unimaginable in this country two years ago. Now most people, especially of the younger generation, find it perfectly acceptable and interesting, while the Old Guard rants and raves and foams at the mouth. One cannot blame them. Their world is collapsing around them.”

Nisanyan said he didn’t have any hesitation when accepting to be on the show. “I only regret I wasn’t as sharp and combative as I could be on that program. I would probably take a stronger stand if I were invited again,” he said.

On Thurs., June 24, Haberturk, which also publishes its own newspaper, responded to the punishment in an article. The decision, it said, shows that the RTUK thinks the moderator should disprove the ideas presented by his/her guests, even during intellectual discussions, and sees the failure to do so as a breach of the principles of publication.

The article also stated that the RTUK is banning the airing of the program because of Nisanyan, who is not a representative of the Armenian lobby and is a Turkish citizen, and a known figure whose views have been published in the books he has authored.

Over 150 readers commented on the article. One disgruntled reader wrote, “This is what AKP’s democracy is all about! Let everyone shut up and only we are going to talk! You only listen and give us your votes.” Another wrote, “I believe the RTUK should make a decision to remove from the map the countries that accept the Armenian position.” While another wrote, “I had watched this program. Nisanyan spoke in such a ridiculous way that I lost my mind. I kiss the hands of Yusuf Hodja. There wasn’t anything worth discussing because [Nisanyan] was conveying ideas that were entirely from a fantasy land. But Yusuf Hodja was giving the proper responses.”

Some simply wrote, “Shame on the RTUK,” and some expressed the view that if Nisanyan was saying anything wrong, there were people on the panel to respond to him, and that there was no need for such steps to be taken by the RTUK.

In a June 29 statement, Reporters Without Borders condemned the RTUK’s decision, stating that “[it] regards this disproportionate punishment as censorship pure and simple, and calls on the RTUK to rescind the decision.” Reporters Without Borders said it “regret[s] that a regulatory body should assume it has the right to decide the terms in which an historical event can be discussed.”

The RTUK was founded in 1994 to monitor and regulate television and radio broadcasts. The agency, which is headquartered in Ankara, has nine members who are elected by the Grand National Assembly of Turkey. It also has local offices in Istanbul, Izmir, Adana, Diyarbakir, and Van. Since its establishment, the agency has been responsible for closing down stations that have allegedly aired separatist propaganda.

A new law has also placed the internet under the watch of the RTUK. Service providers, websites, and users now fear tighter control and increased reprisals.

In recent reports,* Turkey has been called a relentless suppressor of freedom of speech and one of the worst offenders of cyber censorship, along with Iran, North Korea, and at times China. Retaliations against broadcasters, journalists, and writers—from the authorities, individuals or groups—are also frequent in Turkey. In a 2010 report, Reporters Without Borders said there is a special hotline for reporting forbidden online material, and that between October 2008 and May 2009, the number of calls rose from 25,000 to 80,000.

Columnist and poet Ataol Behramoglu is facing a possible sentence and fine of 20,000 lira (~12,576 USD) in damages to Prime Minister Recep Tayyip Erdogan for criticizing the Justice and Development Party (AKP) during a program on CNN Turk on Jan. 2. On June 9, the Ankara court rejected Behramoglu’s lawyer’s argument that since the comments were made during a debate show as a response to the question “Are we going towards democracy or dictatorship?” they were protected under the right to free expression.

The latest eyebrow raiser is Turkey’s ban on some Google pages for the company’s refusal to remove clips off the video-sharing website YouTube.com, which is owned by Google, Inc. Some of the offending clips shed an unfavorable light on Mustafa Kemal Ataturk, who is viewed as the father of modern-day Turkey. In 2008, authorities in Turkey banned access to YouTube and in June 2010, they blocked access to Google pages that shared the same IP addresses as YouTube. Google offered to block the “offensive” YouTube clips in Turkey, but this was rejected by Turkish authorities who demanded their complete removal from the site. Turkey has also accused the company of registering in Turkey and paying local taxes.

Meanwhile, in May 2010, under Articles 314-3 of the criminal code and Article 7-2 of the anti-terrorist law, authorities convicted the editor of Turkey’s only Kurdish daily newspaper, Vedat Kursun, giving him a sentence of 166.5 years in prison for 103 counts of spreading terrorist propaganda for the Kurdish Workers’ Party (PKK). Most recently, the newspaper had published an article in which it referred to the PKK’s jailed leader, Abdullah Ocalan, as “the Kurdish people’s leader.” Ozan Kilinc, who took over as editor after Kursun, was himself sentenced to 21 years and 3 months in prison on Feb. 10.

The weekly Turkish-Armenian newspaper Agos has faced both brutality and harassment. In 2007, its editor, Hrant Dink, was fatally shot by a 17-year-old Turkish nationalist extremist.

Dink had been prosecuted three times for “insulting Turkishness” and received numerous death threats. In February 2010, the newspaper’s website was hacked, reportedly by individuals who admired Dink’s killer.

*Richard Howitt, a British member of the European Parliament and advocate of Turkey’s European Union membership, has warned Turkey that it cannot be considered as a serious candidate to the EU as long as the internet continues to be censored in the country. Howitt said the ban puts “the country alongside Iran, North Korea, and Vietnam as one of the world’s worst offenders for cyber censorship,” as reported by the Associated Press. Boston’s national public radio station, WBUR, noted that the censorship was being likened to ones imposed in Iran and at times China.