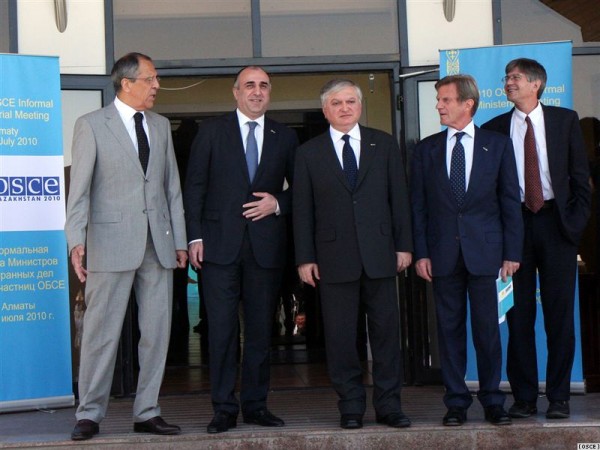 The Heads of Delegation of the Co-Chair countries recalled the joint statement on Nagorno-Karabakh of December 1, 2009 at the OSCE Ministerial meeting in Athens and reminded the sides of their commitment to seek a peaceful settlement to the Nagorno-Karabakh conflict based on the principles contained in the Helsinki Final Act, particularly those related to refraining from the threat or use of force, the territorial integrity of states, and the equal rights and self determination of peoples. They reiterated that the elements articulated by Presidents Medvedev, Sarkozy, and Obama on July 10, 2009 at L’Aquila and repeated at Muskoka on June 26, 2010 must be the foundation of any fair and lasting settlement to the conflict. These proposed elements have been conceived as an integrated whole, and any attempt to select some elements over others would make it impossible to achieve a balanced solution. Foreign Minister Kouchner and Deputy Secretary Steinberg expressed appreciation for the efforts of President Medvedev and Foreign Minister Lavrov to bridge the differences between the parties, taking into consideration the positions discussed during the meetings in Sochi on January 25, 2010 and in St. Petersburg on June 17, 2010.

The Heads of Delegation of Russia, France, and the United States stressed that the efforts made so far by the parties to the conflict have not been sufficient to overcome their differences. They deplored recent developments which have increased tension in the region, including the serious armed incident of June 18-19, 2010 and inflammatory public statements. They warned that the use of force created the current situation, and its use again would only lead to suffering, devastation, and a legacy of conflict and hostility that would last for generations. They urged a greater spirit of compromise to reach agreement on a common basis for continuing the negotiations. Additional actions by the sides are needed to reinforce the ceasefire of 1994 and to create a more favorable atmosphere for further political dialogue and reaching agreements. The Heads of Delegation of the Co-Chair countries renewed their commitment to support the sides in reaching a peace agreement, but reiterated that the primary responsibility to put an end to the Nagorno-Karabakh conflict still remains with Azerbaijani and Armenian leaders.

The foreign ministers of Armenia and Azerbaijan appear to have failed to make any progress during two days of fresh negotiations in Kazakhstan which international mediators hoped would bring them closer to the resolution of the Nagorno-Karabakh conflict. (UPDATED)

Edward Nalbandian and Elmar Mammadyarov began the talks late Friday on the margins of an informal OSCE ministerial meeting in the Kazakh city of Almaty. They met again on Saturday in the presence of Russian Foreign Minister Sergei Lavrov, French Foreign Minister Bernard Kouchner and U.S. Deputy Secretary of State James Steinberg.

In a joint statement issued afterwards, Lavrov, Kouchner and Steinberg said that that “the efforts made so far by the parties to the conflict have not been sufficient to overcome their differences.” They urged the parties to take “additional actions” to strengthen the ceasefire around Karabakh and “create a more favorable atmosphere for further political dialogue and reaching agreements.”

The top diplomats from the three mediating powers also deplored the recent upsurge in ceasefire violations and bitter recriminations traded by Yerevan and Baku. The latter has repeatedly threatened to solve the conflict by force in recent weeks.

“They warned that the use of force created the current situation, and its use again would only lead to suffering, devastation, and a legacy of conflict and hostility that would last for generations,” read the statement. “They urged a greater spirit of compromise to reach agreement on a common basis for continuing the negotiations.”

Mammadyarov was reported to say that the parties and the mediators hoped to make “another step forward” during the talks. “Unfortunately, that issue was not solved, and it can’t be said that there was any breakthrough,” the APA news agency quoted him as saying. “We decided to continue working with the co-chairs.”

According to Mammadyarov, the five diplomats had planned to release a joint statement. He claimed it was not issue because Nalbandian objected to “some issues.” He did not specify them.

Nalbandian denied that, however, saying that it is Mammadyarov who took a “non-constructive position” at the talks. In written remarks released by the Armenian Foreign Ministry on Monday, he also reacted positively to the joint appeal to the warning side made by Lavrov, Kouchner and Steinberg.

The talks were billed by the mediators as a chance for decisive progress in the long-running peace process. The U.S, Russian and French presidents said in a joint statement last month that they are instructing their foreign ministers to “work intensively to assist the two sides to overcome their differences” before and during the Almaty meeting.

The run-up to the meeting was marked conflicting statements made by the Armenian and Azerbaijani foreign ministers. Mammadyarov caused a stir in Armenia by claiming that the talks will focus on details of Armenian troop withdrawal from Azerbaijani territories around Karabakh.

Nalbandian rejected that as a “complete lie,” saying that no such pullout can be even discussed before agreement on Karabakh’s final status. The parties also made markedly differing interpretations of the “basic principles” of Karabakh peace proposed by Washington, Moscow and Paris.

Lavrov, Kouchner and Steinberg did not shed more light on key details of the proposed settlement. Their statement says only that “any attempt to select some elements over others would make it impossible to achieve a balanced solution.”

In Nalbandian’s words, this warning as well as the mediators’ call for the strengthening of the ceasefire regime was primarily addressed to Azerbaijan. He argued that the Azerbaijani leaders single out the principle of international territorial integrity and gloss over the Karabakh Armenians’ right to self-determination also upheld by the mediators.

“They [the Azerbaijanis] pick out one of six [peace] provisions and exploit it,” Nalbandian said. “The co-chairing countries stated in a very simple and open manner that this is a non-constructive approach, that it is wrong to discriminate between these principles and provisions, and that it wrong to take a selective approach.”