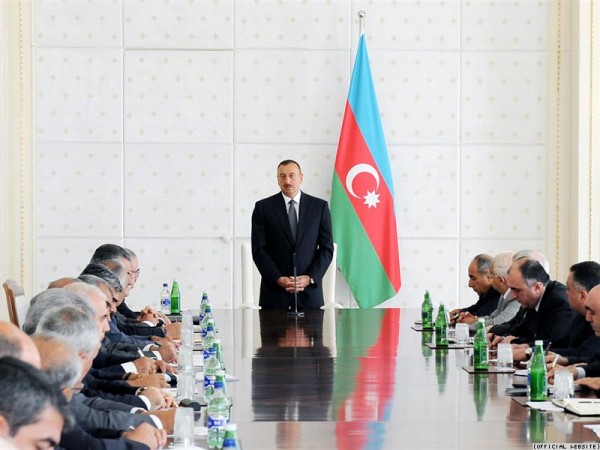 President Aliyev at his cabinet meeting on 13 July 2010

After repeated denials, Azerbaijan on Thursday confirmed Armenian claims that Russian President Dmitry Medvedev presented his Armenian and Azerbaijani counterparts with a new plan to end the Nagorno-Karabakh conflict at their meeting in Saint Petersburg last month.

Elkhan Polukhov, a spokesman for the Azerbaijani Foreign Ministry, was reported to say that the “working proposals,” which have been essentially welcomed by Yerevan, are unacceptable to Baku. Unlike Armenian leaders, he claimed that Russia drafted them single-handedly without consulting with the United States and France, the two other co-chairs of the OSCE Minsk Group.

“Those working proposals were prepared only by one party, and the Minsk Group format was thus not observed,” Polukhov told the Day.az news service. “In essence, the proposals that were made in Saint Petersburg [on June 17] change the whole philosophy of the negotiating process.”

“They thereby cause damage to the work that has been done in the last six years and to the shaky structure that has been built during those six years,” he said.

Armenia’s President Serzh Sargsyan and Foreign Minister Edward Nalbandian have described Medvedev’s proposals as a “new version” of the basic principles of the conflict’s resolution which the mediators had first formally proposed in Madrid in 2007.

Other government figures in Yerevan have claimed that Azerbaijani President Ilham Aliyev cut short his visit to the Russian city and ordered his troops to attack a Karabakh Armenian army outpost the next day to demonstrate his frustration with the latest turn in the negotiating process.

“Only various approaches were discussed in Saint Petersburg,” Polukhov said on July 5. He insisted the ongoing peace talks continue to center on another version of the Madrid principles that was submitted to the conflicting parties. Azerbaijan claims to have largely accepted it.

The mediating powers have so far declined to explicitly confirm that what Aliyev and Sargsyan received in Saint Petersburg is the Minsk Group’s newly modified peace plan. But in a joint statement with Russian Foreign Minister Sergei Lavrov issued on Saturday, French Foreign Minister Bernard Kouchner and U.S. Deputy Secretary of State James Steinberg did praise Medvedev’s efforts to “bridge the differences between the parties.”

The statement was issued immediately after the apparent collapse of negotiations between the Armenian and Azerbaijani foreign ministers held in Almaty, Kazakhstan. The mediators had hoped that the talks will mark decisive progress towards the signing of an Armenian-Azerbaijani framework peace accord. 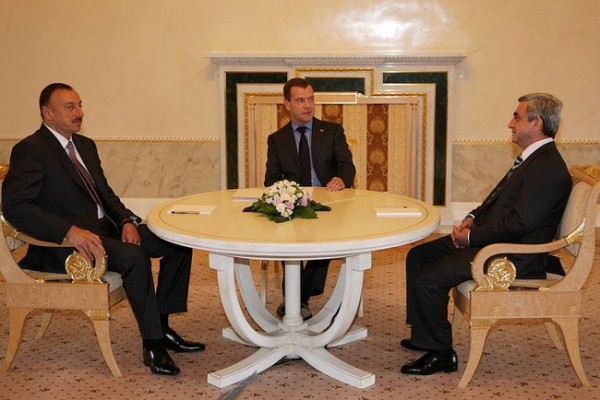 17 June 2010, St. Petersburg: Trilateral meeting of the Presidents of (L to R) Azerbaijan, Russia and Armenia

Sarkisian said late on Wednesday that the peace process will remain deadlocked unless Azerbaijan follows Armenia’s example and accepts the Saint Petersburg proposals as “a basis for negotiations.” “There is only one question today: Does the Azerbaijani side accept the latest proposals by the Minsk Group co-chairs or not?” he told members of an Armenian pro-government youth organization.

“When Azerbaijan says that it accepts, we will continue negotiations. If it says it doesn’t accept, then we will probably have to look for other solutions,” he added.

There have been indications that Baku is now unhappy with not only Russia but the United States and France. In a series of interviews with Day.az this week, several pro-government members of Azerbaijan’s parliament have accused all three mediating powers of pro-Armenian bias.

One of them, Fazail Agamaly, claimed that Baku is now dealing with an “anti-Azerbaijani coalition” formed by Washington, Moscow and Paris. “The limit of trust in the Minsk Group co-chairs has long been exhausted,” he said.

“Despite all their efforts to give their activities a shroud of objectivity, the co-chairs have adopted an anti-Azerbaijani position,” charged another lawmaker, Fazil Mustafa. Azerbaijan should therefore pursue a “tougher policy towards both Armenia and the mediators,” said Mustafa.

In what may have been a related development, Aliyev on Thursday bestowed the title of “national hero” on Mubariz Ibrahimov, an Azerbaijani soldier killed in the June 18-19 firefight with Armenian forces in northern Karabakh. He also ordered his government to name a school and a street in Ibrahimov’s native Bilyasuvar district after the soldier.

Ibrahimov was shot dead in Armenian-controlled territory, a fact presented by Karabakh and Armenian as further proof that the fighting, which also left four Armenian soldiers dead, was provoked by Azerbaijani forces. The Karabakh Armenian military has still not handed back his body.