On July 22 the International Court of Justice at The Hague recognized Kosovo’s independence as legal. In an interview with “Capital” the ARF-D’s director of International Secretariat Giro Manoyan noted that the decision presents an excellent opportunity to further intensify activities for the recognition of Artsakh. Manoyan believes that the logic behind the declaration of Kosovo’s independence is that a state can become independent while not being recognized by the state from which it declared independence. 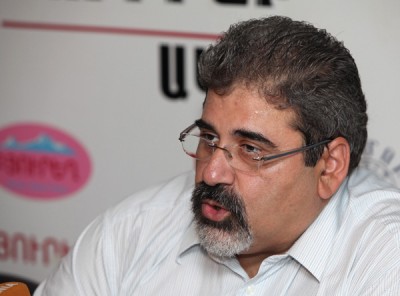 Capital: Mr. Manoyan, according to you, can the decision at The Hague have an effect on the Karabakh conflict settlement process?

Giro Manoyan: I don’t think it can have a direct effect, however if we consider that the Karabakh conflict settlement process has only one dimension, then fundamentally yes, but it’s not the only one. There are other processes, but in that sphere it can have significant results. All of us, society, political powers have not actively pursued the issue of the recognition of independence, however at this moment, the Court’s decision gives us a fine opportunity to close that gap.

The Court’s opinion, I believe, will create favorable conditions for those states who don’t have special interests with Azerbaijan and Turkey, but who have concerns that by recognizing the Republic of Artsakh they can be in contradiction to international law; now they no longer need to be concerned. All those who say that this decision is exclusive to Kosovo are mistaken. The international court’s decision was divided into two fundamental parts: the first part interprets international law and the second part deals with Kosovo and its distinctiveness in general.

In the section of the Court’s decision, which refers to international law, it clearly states that in the 18th, 19th and 20th centuries declarations of independence, in general, were unilateral and often times were met with intense opposition from those states from which they had declared independence.

In that decision, it is also stated that there is no obstacle in international law which would impede or hinder a state’s unilateral declaration of independence. Secondly, it is clearly stated in the opinion, that “territorial integrity” as outlined in the UN Charter or the Helsinki Final Act, has no connection with the declaration of independence and that it refers to inter-state relations between two or more states.

The peoples’ right to self-determination and territorial integrity are issues unrelated to one another. It is this part of the opinion that interests us, because we have received a legal position about the fact that the declaration of Artsakh’s independence does not contradict international law. This provides a foundation for the Armenian side, so that we can continue to comfortably pursue the international recognition of MKR.

Capital: In your opinion, is it expedient at this moment for Armenia to recognize Artsakh’s independence?

I agree with the opinion that Artsakh could have been recognized more easily by others if Armenia had recognized the Republic of Artsakh. However Armenia’s recognition will be proper only at that moment when the negotiation process of the settlement enters a deadlock. But I think that this shouldn’t deter Armenia or MKR, all of us, civil society and political structures alike from actively pursuing the recognition of the Republic of Artsakh, taking advantage of the Kosovo precedent. I must note that the viewpoint of the court is that that state’s recognition, from where the newly independent state came from, is not a norm imposed by international law. It will be very good, if Azerbaijan also recognizes the independence of Artsakh, which I think it will eventually do. However the entire logic behind the declaration of Kosovo’s independence was that a state can become independent and not be  recognized by the state from which it declared its independence.

Capital: You said that the Court, as an individual case, affirmed that “the right to self-determination” and “territorial integrity” are norms which are unrelated. Today we have the Madrid document on the conflict resolution negotiating table which is attempting to reconcile these two norms. Do you think it would be possible to shift the logic of the negotiations by referring to the decision of theICJ if there was the desire to do so?

Giro Manoyan: It is bad that Azerbaijan is trying to present the Karabakh conflict as an Armenian-Azerbaijani conflict, which then further supports their claim on the issue of territorial integrity. Azerbaijan is continually avoiding accepting Artsakh as a full-fledged side to the conflict because then the principle of territorial integrity is rendered irrelevant. While the Madrid document makes note of these two norms, at minimum it is accepted, that Armenia and Azerbaijan are the sides to the conflict. In order to correct the situation, it is necessary that Artsakh, as a full-fledged member, must become a side in the conflict resolution process.

Capital: Recently, Bako Sahakyan, the president of Artsakh, announced that they are not displeased by leaders of Armenia for not recognizing Artsakh’s independence, because at this given moment it is not expedient. Are such statements appropriate in this case?

Giro Manoyan: Our state officials are not correct when they interpret the actions of presidents of other countries. This does not refer only to the current presidents of Artsakh and Armenia. Such a position, in my opinion, is not appropriate. I think that the president of Artsakh was obliged to give that explanation so that people wouldn’t then say, why are the officials of Artsakh not demanding the recognition of Artsakh’s independence by Armenian authorities? I find it incomprehensible that the day after the decision of the ICJ, Stepanakert made an announcement about a rally and then later cancelled it for reasons which are unclear. It remains unclear as to who the organizers were and who eventually cancelled it. I really regret it because this was a great opportunity for Mountainous Karabakh to show to the world that all of its steps have been in keeping with the norms of international law and with the laws of the Soviet Union of the time.

Capital: According to you, what is the passive position of Artsakh’s society and authorities conditioned by?

Giro Manoyan: I think it is possible to explain society’s passiveness in this way: society is placing its trust in the authorities and the authorities are placing their trust in Armenia’s authorities. At any rate, this approach is not right. I am convinced that this passiveness in reality does not reflect the position of Artsakh’s society. Every time Artsakh’s society hears the name of the Madrid document they are extremely concerned. I believe, that the position of the authorities isn’t that way either, something which we are seeing. I also believe that it is not right that authorities in Armenia invite the international community’s pressure on one point – on the Armenian president. Turkey’s example is a quite reasonable and flexible one when Prime Minister Erdogan, being the leader of the parliamentary majority, announced, that he could not guarantee the ratification of the Armenia-Turkey protocols meant to normalize relations. This work ethic is instructive especially when the real position of Artsakh is absolutely not passive.

Capital: Why, in your opinion, is the United States continually repeating that the decision of the Court cannot serve as a precedent for other conflicts?

Giro Manoyan: If Deputy Secretary of State Phillip Gordon had made this statement as a university professor, he would have been fired, because no such thing was said in The Hague’s decision. Of course, there is a section which refers particularly to Kosovo, however as I have already noted, in the decision regarding the interpretation of international law it states that states can unilaterally declare independence. The United States is saying that it is not a precedent so that it does not serve as a precedent and other conflicts don’t follow the Kosovo example. The United States, Russia (who has recognized the independence of Abkhazia and South Ossetia) and almost 70 other countries find themselves in a contradictory situation and are now trying to come out of that situation by saying that those states which they have recognized are exclusive examples. However, they are mistaken, because there is nothing exclusive; the international court states that the unilateral declaration of independence in no way contradicts international law.