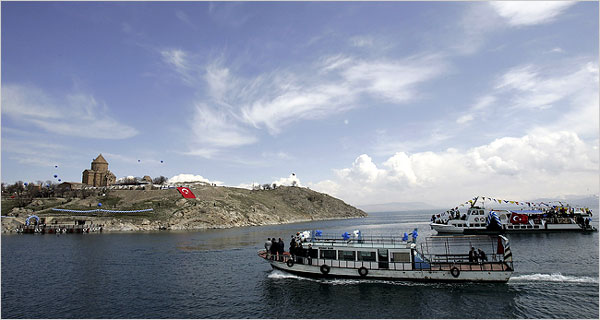 The government of Turkey will be allowing mass services to take place at the ancient Armenian Church of Surb Khach located on the island of Akhtamar in Lake Van, on September 19, 2010.

The mass will be taking place three years after the completion of a $1.5 million renovation of the church, which was funded by the Turkish government and which saw it converted into a museum. However, Turkish authorities are allowing religious services to be held only once a year for Turkey’s surviving Armenian Christian community.

There has been intensive debate in Armenia as to whether official representatives of the government and the Holy Mother See of Etchmiadzin should participate in the religious services, which are seen to be a public relations ploy by Turkey to show its tolerance towards its religious minorities and in terms of its relations with the Republic of Armenia.

Giro Manoyan, director of the ARF-Dashnaktsutyun international secretariat urged Armenians to boycott the mass to be conducted by Archbishop Aram Ateshian, the spiritual leader of Turkey’s Armenian community. 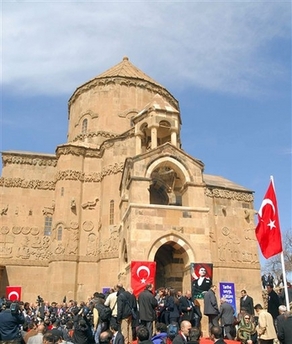 People are seen during a ceremony marking the restoration of the Surb Khatch church-turned-musuem, one of the most precious remnants of Armenian culture from 1,000 years ago, on Akhtamar island in Lake Van, Thursday, March 29, 2007.

“I think it would be wrong to go there on a day set aside by Turkey and especially in these conditions of blockade and so on,” Manoyan said. “I don’t wish to blame believers who want to go, but they must know that they will be contributing somewhat to Turkish provocation.”

Manoyan regretted in that regard the decision by His Holiness Garegin II, Catholicos of the Armenian Apostolic Church, to send two senior clerics to the Church of Surp Khach for the September mass. “I’m not sure that’s the right step,” he said.

Armenia’s Public Council on Monday also called on all Armenians not to attend the mass.”We think that participating in this event organized by the Turkish authorities in Surb Khach Church is about our national dignity, therefore we are calling on Armenians not to take part in it,” Jasmen Asryan, member of the Public Council said. 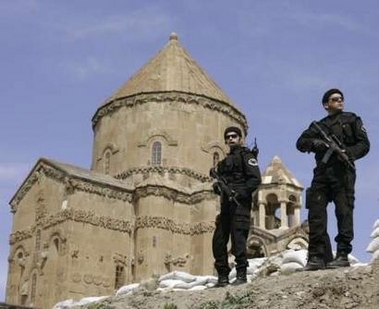 Ankara has promoted the upcoming ceremony as proof of its commitment to tolerance and a gesture of goodwill towards Armenians. Still, it has resisted calls to return the church, perched on the legendary Akhtamar Island in Lake Van, to its rightful owner, the Armenian Church.

President Serzh Sargsyan’s Republican Party spoke out against Armenian participation in the ceremony. The party spokesman, Eduard Sharmazanov, denounced the Turkish government’s decision to reopen it for a one-day religious ceremony on September 19 as a publicity stunt and provocation aimed at misleading the international community.

“Once again, instead of taking a serious step, the Turks are staging an imitation show,” Sharmazanov told reporters. “I don’t think you can achieve tolerance and solidarity of civilizations in that way.”

Built in 921 A.D. by Armenian King Gagik Artsruni, the Akhtamar church is one of the few remaining monuments of medieval Armenian architecture in what is now eastern Turkey. The Turkish government initiated the church’s renovation in 2005 after being urged by the European Union to consider placing it on UNESCO’s World Heritage List.