On September 2 at 7:00 PM, the Armenian Revolutionary Federation-Dashnaktsutyun is organizing a public meeting-celebration in Yerevan at the Dynomo Sports Arena dedicated to Artsakh’s Independence Day. This is an interview by the ARF-D Press Office with Armen Rustamyan, Chairman of the ARF-Dashnaktsutyun Supreme Council of Armenia.

Question: Is this a celebration or a political meeting?

Armen Rustamyan: For the ARF-D, marking Artsakh’s Independence Day is not only a reason to celebrate, but also an opportunity to look back over the past year and make assessments… How close did we come to resolving our issues? What new challenges or threats have risen? It is obvious that the main issue we have is once again the Karabakh issue. Some level of agreements are expected around some potential principles, and based upon these some kind of a whole package – in other words the issues have become more concrete. Tied in with these issues, the confusion, which exists within society, must naturally be eliminated. The ARF-D with its own position will try to clearly state what the issue is and where the real threats and dangers are. We have said on many occasions that these exist, but at this public meeting, we will raise them once again.

Question: But in Armenia today there exist many, many domestic issues, which I believe, the ARF-D must discuss as a political party. 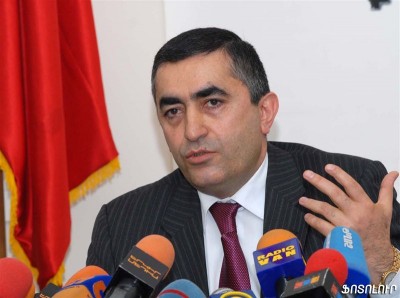 Armen Rustamyan: The Karabakh issue is one of the most important issues on the Armenian people’s agenda and which guides our foreign and domestic policies. The main issue for this generation is Artsakh and its resolution and as long as this issue is not resolved, it is not possible to envision a complete resolution to all the remaining issues. The main approaches to the resolution of the issue have very clearly been formulated. One side says that without concessions we cannot develop; as long as the issue has not been resolved Armenia is condemned to bear losses; it is pointless to expect any kind of development. Our approach is different. We are confident that Armenia has all the possibilities and can develop without concession. To develop with concessions and develop without concession – it is within these two different theses that a serious ideological debate has arisen. We are convinced that in the case of concessions we will lose our national-state prospects, in general.

Our main objective is to show how dangerous the thesis “development with concessions” is. We find that the only road for Armenia’s future is to realize development without conceding. This, of course, is a difficult issue but it is necessary to formulate this issue with a governing power who is capable to do that, so that the country can really be able to develop and not concede. Not conceding is a necessary condition, which many have only realized now. But how to develop? Our possibilities, which up until now have not been utilized, let me go further and say, which we have squandered, are directly connected with our domestic life. The Karabakh issue is inter-connected with our domestic life and our domestic problems. So, these issues are also on our agenda.

Question: To struggle for national interests, in itself, assumes the maximum consolidation. In your opinion, how consolidated is society with the authorities and political parties around national issues?

Armen Rustamyan: We do not have the necessary atmosphere for consolidation in our country. Yes, it is consolidation that brings us to the formulation of our full potential and in multiplying our possibilities. Consolidation cannot take place in conditions of injustice, in an environment that lacks freedom, in other words internal freedoms, internal justice are those important conditions upon which is it possible to have  pan-national consolidation. We believe in this, we believe that those sources for the country’s development must fully work, concrete steps must be defined. And in this regard we will no longer have to beg Turkey to open the border; we will not hand over historical territories to Azerbaijan just because Azerbaijan is able to start a war.

Question: In that case, perhaps it is necessary to begin by solving domestic issues.

When these things become regulated, it will complete the sources of our internal power, through which we will be able to secure development.

To develop without conceding – this will be our primary slogan and the establishment of our partnership with other political powers will be based upon this.  Our answer to calls for war and Azerbaijani bravado is – let them just try. If you want peace, you have to be ready for war: no one will bestow you with peace. And you cannot face foreign threats without having a healthy, just and free society. A weakened society cannot have a powerful army.

At a press conference on August 31, Armen Rustamyan spoke about Artsakh’s Independence Day and other issues including a draft resolution by Azerbaijan to be on the United Nations’ General Assembly agenda on September 9 entitled, “Observance of international humanitarian law and international human rights law in the occupied territories of Azerbaijan.”

Rustamyan underscored that the lobbying efforts by Azerbaijan to remove the peace process from the OSCE Minsk Group would be detrimental to the final resolution of the conflict. He outlined the ongoing efforts by the ARF-D around the world to ensure that this resolution does not pass in the General Assembly. “[We] should initiate a campaign for the international recognition of Nagorno (Mountainous) Karabakh Republic”, Rustamyan stressed. The International Court decision on Kosovo is a good precedent and applicable to the Karabakh case. The ARF-D leader said that in response to the increasing lobbying efforts by Turkey and Azerbaijan, an Armenia-Nagorno Karabakh tandem must be created, as two independent countries, to counter the Azerbaijani-Turkish efforts in this regard. The number one issue to be determined in the Armenia-Karabakh tandem is the establishment of military-political treaty with the Republic of Nagorno (Mountainous) Karabakh that would clearly define that Armenia is the guarantor of NKR’s independence and security.

At the same press conference, Rustamyan spoke about the recently signed military pact between Armenia and Russia which would see the extension of Russian troop presence in Armenia till 2044, upgrading Russia’s role in ensuring the country’s security and which committed Moscow to supplying the Armenian military with modern weaponry.

Mr. Rustamyan said that the ARF-D believes that Armenia had no choice but to extend and deepen its military ties with Russia through this new defense pact. He said that the collapse of the normalization process between Armenia and Turkey was a major factor behind the agreement. He also said that Armenia was not left with many choices. “It is probably not a secret to anyone that 80 percent of our military security — in fact, much more than that — is today conditioned by our relations with Russia. So in terms of military security, Armenia today has no viable alternative. This is a fact,” Rustamyan said and went on to state that any enhancement of Russian-Armenian military cooperation is positive and must be viewed within this context.