ARF-D rally and celebration in Yerevan

YEREVAN (ARF Press Service)—Thousands converged on the Dynomo Sports Arena on Thursday, September 2 for a rally organized by the Armenian Revolutionary Federation-Dashnaktsutyun celebrating the 19th anniversary of the independence of the Nagorno (Mountainous) Karabakh Republic.

In his opening remarks, ARF Bureau member Levon Mkrtchyan said the Karabakh liberation struggle will continue until such time as its independence is internationally recognized.

The main message of the evening, which was conveyed in speeches, video presentations and on banners throughout the stadium was that there cannot be an alternative to Karabakh’s independence and the will of the people of Karabakh cannot be compromised through any concessions.

“No government—either in Armenia or Karabakh—has the right to veer away from the will of the people of Mountainous Karabakh, which was expressed through two referendums. The Mountainous Karabakh Republic expects nothing less than independence and no one has the right to talk about any other status,” said ARF-D Supreme Council of Armenia chair Armen Rustamyan, who is also the chair of Armenia’s parliamentary commission on foreign relations. 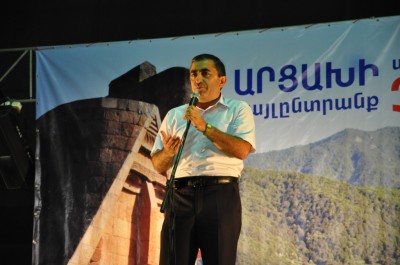 “One cannot advance by conceding national interests and ideals,” said Rustamyan, adding that the ARF-D demands that the government refrain from taking steps that would be impossible to correct in the future. He also called on the authorities to abandon the Turkey-Armenia protocols, explaining that merely suspending the ratification of the documents, as Armenia has done, will give Turkey the upper hand. He pointed out that while the Karabakh conflict resolution process has gained momentum, it has not done so in favor of the Armenians. The protocols, he added, have allowed Turkey to become actively engaged in the negotiation process, creating an imbalance that favors Azerbaijan.

Rustamyan stressed that for the ARF-D it is a priority to form a national government that will be guided by and lead with the principle of “development without concessions.”

Before the conclusion of the event, 18 new members entered into the ranks of the ARF-D of Armenia.

In Stepanakert Thursday, Mountainous Karabakh Republic President Bako Sahakyan spoke to reporters about the importance of staying true to the sacrifices made during the Karabakh liberation struggle. He said the people of Karabakh made their decision on September 2, 1991, reiterated it during the December 10 referendum of the same year, defended the independence and freedom of the Republic during the imposed war and reaffirmed their will with the December 2006 constitutional referendum.

“This holiday is important and memorable for all the people of Artsakh, as everyone has had a personal role in the formation and development of our independent state. Of course, we still have a lot to do both in the field of foreign policy and in the socioeconomic sphere. However, one thing is clear and irreversible: the people and authorities of Artsakh are resolute and committed in the realization of our national aspirations and will do everything possible to build a bright future for the Artsakh Republic,” said Sahakian in his congratulatory statement on this occasion.

“September 2 is also a holiday for our compatriots in Armenia and the Diaspora. Because of their joint efforts the ancient Armenian Artsakh still exists and continues to flourish and prosper,” added Sahakian who led the Republic in celebrations of Karabakh’s independence.