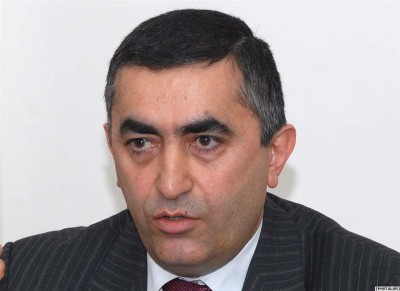 ARF-D parliamentarian and chair of the ARF-D Supreme Council Armen Rustamyan said that no breakthrough in the Karabakh conflict is possible because of Azerbaijan’s hard line policies. “Azerbaijan has expressed no other position; it has failed to embrace the idea that the issue should primarily be resolved by recognizing Karabakh’s status and ensuring its people’s security,” Rustamyan said at a press conference on October 26.

The ARF-D parliamentarian said that at this point in the negotiation process, international mediators are attempting to impose peace and that the Armenian-Azerbaijani summit in Astrakhan, Russia, will be held within the framework of this very logic.

“The two sides have either directly or indirectly welcomed the Madrid principles, and the new Madrid principles. Now, I would like to pose a simple question to those on our side who have welcomed them. From the six points included in the principles, which one of those will contribute to the resolution of the issue? How are they in keeping with the two referendums conducted in Republic of Mountainous Karabakh (MKR) in 1991 and 2006? And if they are not in keeping with them, what are we really welcoming?” said Rustamyan. He went on to say that the negotiation process has entered a public stage and that signifies that we have moved from the stage of persuading to the stage of imposing peace. “If peace is imposed in this way, then we have lost that which we were pursuing from the very beginning,” noted Armen Rustamyan.

The parliamentarian, who is also chair of the Parliamentary Standing Committee on Foreign Relations, said he expects that a certain package of principles will become a basis for this peace, which he sees as very dangerous. “We may once again hear a strict appeal to speed up the negotiations on the basis of the proposed principles and move on to drafting a large peace agreement,” he added.

The issue of recognition of the Republic of Mountainous Karabakh is expected to be brought up in parliament in the next few days. During the press conference, Mr. Rustamyan asserted that the ARF-D parliamentary faction will vote in favor of recognition. He said that if the emergency bill is not passed, this will more than likely have a negative impact on Armenia. “The international community will say: if you are placing the issue to a vote and it doesn’t pass, then why should we recognize the independence of Karabakh?” Rustamyan explained. According to him, it is a very sensitive moment because the Heritage Party (who tabled the emergency bill for recognition of MKR) and the parliamentary majority are stubbornly opposing one another.

“The majority’s hard line is incomprehensible. They are not agreeing to include the issue in the larger agenda for issues of mandatory consideration at which point the Heritage Party is ready to remove the bill from the upcoming regular four-day session of Parliament,” Rustamyan noted. In his opinion, the international community will also not understand Armenia’s recognition regarding it as a obstruction to the negotiation process. “Recognition must be our last step, our final weapon. Azerbaijan is not moving toward exacerbating the situation because it has no desire to accept responsibility for disrupting the negotiation process. Armenia must also not take on that kind of responsibility, because peace is better than war.”

According to Rustamyan, instead of recognition the Armenian side must sign a military and political pact with the Republic of Mountainous Karabakh and must present itself as a new guarantor. In connection with this, the parliamentarian considered the government’s new legislative initiative through which Armenia is able to sign bilateral agreements with internationally unrecognized subjects as important and positive.

During the press briefing, Armen Rustamyan noted that the core objective of the ARF-D is to ensure regime change in the country and to put in place a qualitatively better regime. However, according to the parliamentarian that must be realized through a process of normal and civilized elections.

“We understand very well that by being in opposition, participating in elections is an extremely complicated undertaking, taking into consideration the defective electoral system. But we are doing everything to ensure that these defective manifestations are reduced so that the electoral process can become commensurate with the desires and notions of our people,” he said.

In Armenia, the electoral processes are so flawed that the quantity of ballots in the ballot box has absolutely no connection with a particular political party’s real rating, Rustamyan noted. “If you were to add up all the anticipated votes, they would reach about 1000 percent. I have heard that the coalition has said that they have 80 percent of the vote, and the opposition can split up the rest of the votes amongst themselves. This is an insult to the people. This means that they have already decided who is getting what percentage of the vote and are excluding the factor of the people’s participation in the election.”

Regardless of the current situation, the ARF-D will be continuing its visits to the different regions of Armenia. Regional bodies of the party have already been instructed to begin meetings with the constituents. “We have instructed our regional structures to begin organizing rallies or large meetings with the people,” noted Rustamyan and added that the main issue to be discussed was social and economic issues and the specific condition in the regions.