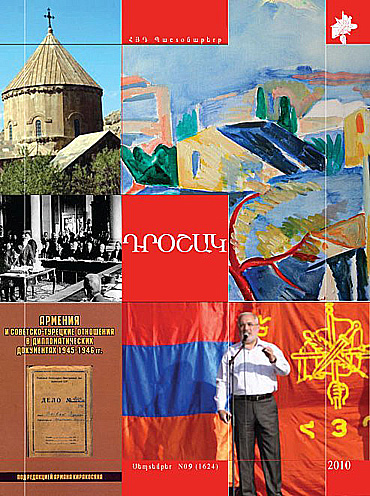 The concept of democracy, similar to socialism, justice, freedom, nationism1, culture and many other concepts, in essence, is a universal idea and is characterized by a universal or global definition. However, in terms of its form, realization and application—and similar to the other noted concepts—has a national framework and a dependence on local conditions.

According to classical Marxist theory, nations, and particularly small nations, parallel with the process of the centralization of capital, should have been diluted, assimilated, and finally obliterated at the close of the capitalist century. This concept was largely advantageous for the Bolsheviks’ expansionist ambitions, their policy of Russification and it was against this backdrop that the so-called template of “international socialism” came to the fore and in conjunction with it an entire doctrinal intellectual capacity. In fact, Russian imperialism was hiding behind this gossamer veil.

It is as if Procrustes has returned to life, with the impetuous desire to measure people with his bed. Moreover, all those who do not wish to settle into the Procrustean bed’s intricate system of the “new world order” are “examined” with a new template. Those who profess true nationism instead of legalized and replicated “nationalism,” are considered Nazis; political powers who believe in national self-determination, national aspirations and national liberation struggles are considered the likes of terrorist organizations led by Bin Laden, who has a significant past of working in collusion with “Western security”; believers in the principle of socialism and social justice are identified as communist propagandists.

Procrustean inspections are not unfamiliar phenomena for the 120-year-old Dashnaktsutyun, which has had an active presence on the political stage during the derivation and disappearance of several new and old world systems.

In addition, today, in this last world order, the so-called concept of “international democratic standards” makes its weighty prevalence known at each step.

It is a historical fact, for Armenians democracy is a traditional state of mind. In the 19th century, when even in some European empires, civic life was governed exclusively through monarchies, the stateless Armenians incorporated constitutional reforms in their only national-organizational structure—the life of the church. Furthermore, in 1918, in the newly independent Armenia, for example such democratic laws were practiced (i.e. the law on gender equality), that did not exist in certain European states.

Now, for several years, they have been trying to embarrass that very same state and nation for not complying with democracy’s “international standards” on the world stage.

In the Republic of Armenia, the ruling authorities and the radical opposition, in order to keep or come to power, through their political activities are guided exclusively by the sheer political standards of the “new world order.” For them, the other issues are mainly themes for “domestic consumption.” More accurately, they do not have fundamental differences of opinion regarding other issues, for example on foreign policy, as well as on social and economic, scientific and cultural and many other spheres.

Moreover, it is gradually losing its acceleration in scientific and cultural independent development.

In the process of resolving these issues, the bearers of neoliberal values, whether they are within the ranks of the ruling authorities or the opposition, are not only indifferent, but also rather unhelpful, perhaps even dangerous.

Guidelines for radical, complete, and systemic reforms must be sought within the realm of the national opposition.