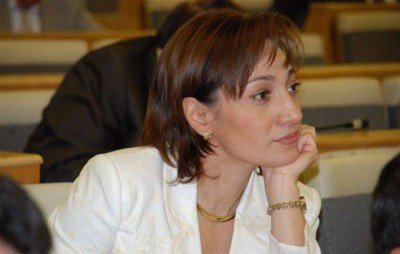 In an interview with the daily Aravot, ARF-D parliamentarian Lilit Galstyan said, “Sadly, the political elite, who today occupy themselves with ruling, by virtue of their philosophy and value system are not capable of realizing reforms and modernizing our country. We live in an archaic and criminalized system. Every second dozens of laws are violated which limit or flout human rights and freedoms. An archaic and authoritarian regime is not capable of working democratically with its own people.”

Aravot: On October 23, you were present at the protest concert organized by the Protection of Teghut across from the conservatory. During the event, the cafe across from the conservatory which had promised to supply the organizers with electricity, refused to do so based on a phone call they had received. What is the reason for such an obstruction? Are the ruling authorities so weak that they are afraid of even such small ecological gatherings?

Lilit Galstyan: If the authorities were convinced and if they had the sense that they had been able to secure conditions of social justice and solidarity, then there shouldn’t have been any issue. It is clear, that the ruling authorities do not have the boldness nor are they willing to talk with the people. The reality is so primitive and hilarious; they have transformed the entire vicinity of Opera Square into a mobile festival and continually fill up the square with candy sellers – they have even set up ping pong tables – if only to occupy every square meter so that it will not be possible to hold any mass gatherings. All that remains for them is to set up metal cages to protect the Opera from the people.

What concerns me foremost is the disgraceful condition of the Opera. And now they have set up tables that are supposed to be for a fair. They have created a circus-like atmosphere when, in fact, the Opera is a national wealth. That building is itself a cultural monument and it deserves to have an atmosphere commensurate with its character.

To try and suppress the opposition with such methods is like trying to build a dam against a raging river; however long you try to dam it up, one day the river will break through. There is a more serious and civilized solution to that which is taking place in Armenia – we need to become a real democracy, and to have a state where justice and the rule of law prevail.

Sometimes I sympathize with the ruling authorities; we have placed the responsibility of realizing a democratic state on their shoulders, but their value system, their perception of politics and their civic comprehension is completely foreign to this. They can’t be any other way; their values are violence, how to bypass laws and a clan leadership.

Aravot: Among the news networks in Armenia, we witness that on the one hand, two television stations, Yerkir Media and Kentron, relatively speaking are somewhat freer than the rest and have been able to maintain their broadcast licenses without competition. On the other hand, from 18 announced competitions, only in cases of two, one of which A1+ is participating in, there is real competition. So the same question arises: is it possible that the ruling authorities are so weak that they can’t tolerate the presence of unsupervised freedom of speech in our country?

Lilit Galstyan: Not only are the ruling authorities weak but they truly suffer from political shortsightedness. We are an authoritarian country governed from one point, with one button. The political majority is the expression of that whole hierarchy. About two months ago they forced the new edited version of the Law on Television and Radio down our throats. There was a public outcry, several protests from professionals, dozens of proposals were made by the ARF-D and the Heritage Party and that was exactly our main concern, which we are confronted with today. The president’s ink has still not dried and already there is a working group that has been created to eliminate all the sores, bumps and mines. They should have thought of this before all the protests that had gone unheeded.

Lately, I have come to the conclusion that dialogue with the ruling authorities has been transformed into a monologue with the Great Wall of China. Often times I think that issues will not be solved not only because they don’t want them resolved, but rather because they do not have the ability, they do not have the political will or sufficient reserves of wisdom; there is an absence of aptitude. They have no connection to the proclaimed democratic values – and freedom of speech is one of the tenets of democracy. We demand dialogue, consensus and social solidarity from the ruling authorities, but I repeat, these are not their values.

Aravot: But is dialogue with the ruling authorities always transformed into a monologue with the Great Wall of China? Another legislative initiative to amend the Laws on Language and Public Education was a source of public outcry; today there are two big differences in that which was presented to parliament in April and that which is in discussion during this four-day parliamentary session.

Lilit Galstyan: Today as I was entering the National Assembly I saw the small “We Oppose the Reopening of Foreign Language Schools” group who represent the minority of the Armenian people and who, as a last effort, are trying to protect their mother tongue in this independent Armenian republic, which is an undeniable value secured by the Constitution. Yes, the initiative has been mutated. Its original conception and justification through which the education ministry presented this law has nothing to do with that previous legislative initiative which is continually being drawn out. And why is it still on the agenda? Because it will serve not the greater national interest – the securing, development and strengthening of the national school system – but rather it will serve the pledge of a particular businessman who has promised to open an international school in Dilijan. He made a promise, and we got burned.

When I spoke about a monologue with the Great Wall of China I was referring to the urban planning taking place in Yerevan as well. In 2008 there were serious hearings which took place in the National Assembly. It is true, I know, that pragmatists and cynics are the ones who realize programs of the state, but it is the romantics who propel politics forward. I see myself in the second group. The emphasis on the problems and issues during those parliamentary hearings were so insightful, that being a romantic, I thought that we would be able to achieve some progress.

At the end of the day, this country belongs to all of us, it is not a temporary playing field that you steal whatever you can from. But today, the ruling authorities are guided by the mentality of not taking responsibility for those who steal. Never mind about creating a civilized state where ecological issues are taken into consideration.

We are so far removed from civilized political processes that we could care less about the environment. They view each centimeter of our homeland as a potential construction site. And still, there is hope in Armenia because there are people – in particular the young generation who see this civic responsibility – who know that one does not need to be proclaimed mayor to be the owners of this city and they really have a feeling of ownership, which is not simply a slogan or a banner placed during the Yerevan-Erebuni celebrations, but a real sense of ownership and responsibility.