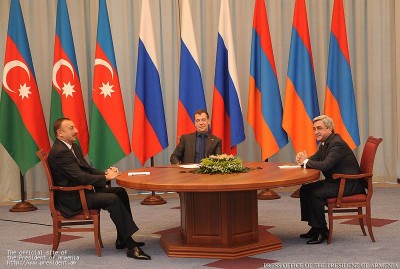 At the talks, in Astrakhan, the parties approved a joint statement. The document, which is humanitarian in purpose, has great importance for resolving the conflict in view of the various difficulties still apparent today in Azerbaijani-Armenian relations over the Mountainous Karabakh issue, Dmitry Medvedev said and added that the statement aims to bolster the ceasefire regime and strengthen confidence-building measures. The Armenian and Azerbaijani presidents agreed that their first step would be an immediate exchange of prisoners of war and the return of the bodies of those killed. This would be organised with the help of the co-chairs of the OSCE Minsk Group and the International Committee of the Red Cross.

Answering journalists’ questions after the meeting, Mr Medvedev noted that the general principles for settling the Nagorno-Karabakh problem could be drafted in time for the OSCE summit that will take place on December 1-2, 2010 in Astana. “Overall, I think that these are very useful meetings even though they are not easy and the talks involve quite intense and sometimes emotional debate, and even though this is not an easy undertaking for the mediators either, for the Minsk Group, and for Russia as one of the Minsk Group’s co-chairs. First of all, any kinds of talks are better than having the conflict become active. Second, and perhaps most important, these are not just talks but are steps forward.

“I can inform you now that the two parties have just signed a joint statement. This is a humanitarian agreement, but at the same time it is very important given the various difficulties that we still see in Azerbaijani-Armenian relations over the Nagorno-Karabakh issue. This is a special declaration aimed at bolstering confidence-building measures so as to organise as swiftly as possible the exchange of prisoners of war and return the bodies of those killed. Though at first glance this is a serious but nonetheless private issue, it is very important because the two sides have not been engaged in open and direct confrontation for quite a long time now, but there are still problems, there are still shots being fired and people killed. The point comes when it is essential to look openly at the situation and take steps towards each other, attempting to work out perhaps small but nevertheless very important problems.

“Another subject that we discussed today was of course the issue of a peace treaty and overall settlement. This has been on the agenda at all of our meetings since the meeting in Maiendorf in the Moscow Region, when the joint declaration was adopted. Today we discussed this subject too and agreed on the following points.

“The general settlement principles that will later lay the peace treaty’s foundations have still to be agreed on, but we have nonetheless made progress that gives hope that if the two sides work hard over the coming month – and we will give this instruction to our foreign ministers – we could have an approved draft of the general settlement principles in time for the OSCE summit in Kazakhstan on December 1-2.

“I emphasise that there are still many issues to sort out, but both sides seek to reach agreement on the differences over wording that still remain. Russia will continue its efforts. I believe that we can reach results and I think we have grounds for being reasonably optimistic. Of course, the main part of the work is still ahead.”

The Astrakhan trilateral meeting was the seventh so far and the third this year.

Joint Declaration adopted after the trilateral meeting of the Presidents of Armenia, the Russian Federation and Azerbaijan in Astrakhan

“Reaffirming the provisions of the Joint Declaration signed in Moscow on November 2, 2008, the Presidents underlined that the resolution of the conflict through the political and diplomatic means requires additional efforts aimed at the reinforcement of the cease-fire and enhancement of confidence building in the military sphere. Toward that end, the Presidents of Armenia and Azerbaijan agreed as a first step, assisted by the Minsk Group and the International Committee of Red Cross, to immediately exchange prisoners of war and return remains of the dead, and driven by the utterly humanistic nature of these issues, to act upon this principle hereafter.”

ARF-D disappointed ans is not optimistic

The Armenian Revolutionary Federation-Dashnaktsutyun (ARF-D) is disappointed at the results of the Astrakhan meeting and does not have any special hopes in connection with the OSCE Summit in Astana.

The Armenian-Azerbaijani-Russian presidential meeting has fallen short of ARF-D’s expectations. The sides did not discuss the principal aspects of the Mountainous Karabakh conflict, particularly Mountainous Karabakh’s status and security guarantees, Armen Rustamyan, the chairman of the Armenian parliament’s Foreign Relations Committee and chairman of ARF-D Supreme Council of Armenia, told journalists on October 28.

The statement adopted in Astrakhan will, to a certain extent, contribute to security and atmosphere of confidence in the conflict zone, provided the agreements are put into effect and not violated by Azerbaijan, said Rustamyan. “Baku’s position does not inspire any optimism – Azerbaijan organized a provocation just on the threshold of the Astrakhan meeting. Athough the present situation in the Mountainous Karabakh conflict zone is a neither-war-nor-peace situation, but official statements talk about exchange of POWs,” Rustamyan said. He is not optimistic about the OSCE Summit in Astana. “I do not think any fundamental agreements may be reached [at the OSCE Summit] in Astana [in early December], as the sides are too far from each other now. Azerbaijan is not at all ready for any compromise. If the international community and mediators are expecting the summit to produce any results, it means they hope for concessions by the Armenian side. They are mistaken, however. The Armenian side will not do it,” Rustamyan said.

The main objective of the recent trilateral meeting of Armenian and Azerbaijani presidents initiated by their Russian counterpart Dmitry Medvedev was to some extent “to calm the atmosphere,” Giro Manoyan, director of the International Secretariat of the ARF-D Bureau told journalists on October 29. According to him, the atmosphere between the Armenian and Azerbaijani relations had reached a high level of tension due to the statements by Azerbaijani President Ilham Aliyev and some of the statements Armenia’s president Serzh Sargsyan made in response, as well as due to the ceasefire violations that frequently take place in the recent months.

“Medvedev succeeded in doing so,” said Manoyan, adding that the meeting in Astrakhan gave nothing else. Even more, there are no grounds to have any expectations from the December meeting to be held in Astana, Kazakhstan. According to Mr Manoyan, in a best-case scenario, the Organization for Security and Cooperation in Europe may at its year-end summit come up with a statement over the Mountainous Karabakh conflict, by reaffirming the principles of the settlement of the conflict as already declared by the presidents of the co-chair countries of the OSCE Minsk Group or by the OSCE Ministerial Council, on 2 December 2009, in Athens.

Speaking about the agreement reached between Serzh Sargsyan and Ilham Aliyev to swap prisoners of war and repatriate the remains of all those killed on the line of contact, Giro Manoyan said that Azerbaijan will perhaps be committed to its pledge only to show to its people that there is some progress in the talks process.

Furthermore, Mr Manoyan said that Turkey continues linking the settlement of the Karabakh conflict to the normalization of the Armenia-Turkey relations – something that is “clear to all, including the US.” According to him, Turkey’s attitude is another reason Armenia to withdraw its signature from the Armenia-Turkey Protocols.

Manoyan considers that opening of Heydar Aliyev’s statue in Astrakhan was a gesture made by Moscow to the returning Azerbaijani leader to Russia who was upset at the results of their last trilateral meeting in Saint Petersburg, in June. One should not consider it as Russia’s serious change of position, he noted.

No critical breakthroughs in the Moutnainous Karabakh peace process is expected at OSCE Summit in Astana, December 1-2, leader of the Armenian Revolutionary Federation-Dashnaktsutyun parliamentary faction, Vahan Hovhannesyan, stated at a press briefing in the Armenian National Assembly on October 29.

“Did any such meeting achieve significant progress in the Karabakh conflict resolution before? Why should we expect a breakthrough this time?”  Hovhannesyan asked.

The ARF-D leader stressed it would be better if Azerbaijan changed its uncompromising stance and it too made concessions, then it would be possible to speak of the light at the end of the tunnel then, but…