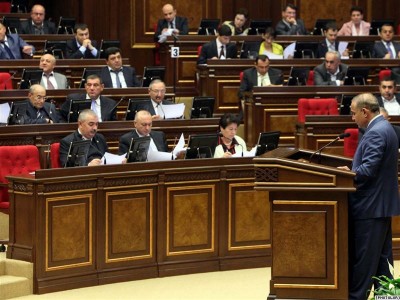 In the Armenian parliament, the ARF Dashnaktsutyun put into circulation a draft statement on the creation of Armenia-Mountainous Karabakh Republic military-strategic alliance, leader of the of ARF-D parliamentary group Vahan Hovhannesyan told a press briefing at the Armenian National Assembly. “Though the draft statement has been positively estimated by a relevant committee, it is not put to vote, as the authorities consider it to be premature,” he said. According to Hovhannesyan, adoption of the document would contribute to the international recognition of the Mountainous (Nagorno) Karabakh Republic. Hovhannesyan also asserted that had the authorities and the opposition in Armenia heeded to the ARF-D’s proposal, now there would not be the need for new parliamentary initiatives in this regard.

Meanwhile, another opposition faction in the Armenian parliament has delayed the vote on its proposed legislation obliging Yerevan to formally recognize the independence of the Mountainous Karabakh Republic, after the parliament’s political majority warned to opt out of the procedure.

Armenia’s ruling Republican Party and its junior coalition partners, Prosperous Armenia and Orinats Yerkir, had earlier voiced their concerns that passing the bill advocated by the opposition Zharangutyun (Heritage) party at this moment could be harmful to the ongoing internationally mediated talks over the Karabakh conflict.

The political parties of Armenia’s ruling coalition issued a statement later on Thursday explaining their decision to opt out of the vote if it was held.

“Supporting the efforts and initiatives aimed at achieving the Mountainous Karabakh Republic’s international recognition, we are convinced that Mountainous Karabakh’s unilateral recognition by the Republic of Armenia at this moment does not proceed from the constructive position assumed by Armenian President Serzh Sargsyan in the negotiations continuing within the framework of the OSCE Minsk Group,” the parties said.

Armenia has been reluctant to de jure recognize Nagorno-Karabakh as an independent entity despite having close political and economic ties with the de-facto leadership in the disputed region that has been under ethnic Armenian control since the 1994 ceasefire.

Vahan Hovannesyan said setting deadlines for the Karabakh recognition bill, now expected to be put to a vote shortly after the Astana meeting, creates “an unpleasant situation.” Dashnaktsutyun had also challenged the timing of bringing the bill to parliament, but said it would vote for it if the procedure had to take place.

“Suddenly it turns out that our whole society should be eagerly waiting for something to happen in Astana, but nothing will happen there,” said Hovannesyan.

The Republican Party of Armenia, Prosperous Armenia Party (PAP) and Country of Law Party are sure that the international recognition of the Nagorno Karabakh Republic (NKR) has no alternative. The full realization of the right of self-determination of the Artsakh people is the Armenians’ dream and goal.

Defending the efforts and initiatives made directed to the international recognition of NKR, we are sure that the step taken to the one-sided recognition of NKR by the Republic of Armenia this moment does not stem from the constructive position adopted by the President of the Republic of Armenia Serzh Sargsyan within the framework of the OSCE Minsk Group, which supports the parliamentary coalition.

During the past 18 years the Republic of Armenia has permanently shown concerned approach to the negotiation process, being sure that the peaceful and fair settlement of the Nagorno Karabakh is only possible in the conditions of kind and consecutive implementation of the OSCE basic principles.

At the same time we are sure that the right of the self-determination of the Artsakh people and having their own state is the highest value, for which the National Assembly of the Republic of Armenia is constantly ready to take more decisive steps, if the negotiation process fails endangering the basic rights and security of the Artsakh people.

In case of the failure of the ongoing negotiation process we, ourselves, will initiate the step of the recognition of the Republic of Nagorno Karabakh and we will support the initiative of any other political force being concerned about it.

At this moment the ruling political coalition states that it will not take part in the voting of the draft law regarding the recognition of the Nagorno Karabakh Republic.

Head of the Country of Law faction, Heghine Bisharyan