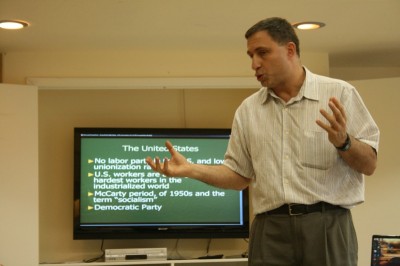 On June 24, 2010, the Republic of Armenia’s National Assembly decided to privatize its social security system by adopting an extreme version of a private pension model. Along with the pension system, the National Assembly also radically changed its income tax regime. The mandatory private pension system is set to take effect in January 2014, while the new income tax will be implemented in January 2011. Members of parliament representing the ARF and Heritage parties stood alone in opposing both of these regressive and unfair laws.

Risking Retirement in the Market

The new pension law in Armenia is an extreme model, where 100% of an employee’s pension contributions will be allocated to private individual accounts, which will then be invested in stock, bond and money markets. After a transition period of about 25 years, every employee will be part of this radical model. Out of about two hundred countries in the world only a tiny handful—mainly Chile, Kazakhstan and Kosovo—have such a drastic system.

It is surprising that while the world is still recovering from the recent financial crisis—which emphasized the hazardous nature of capital markets—Armenia’s government adopted a pension system where 100% of employees’ pension contributions will be entrusted to the whims of the financial markets.

Another problem with the government’s proposal is that a pension system based on private accounts requires developed and transparent financial markets and institutions, competent managers, and efficient regulations and regulators. Unfortunately, in the case of Armenia, all of these are lacking. At the same time, there is a significant amount of corruption, which makes the adoption of a private pension system even riskier. During October 2008, even IMF and World Bank experts advised the government to “reformulate” the pension changes it was proposing in order “to reduce risk and improve sustainability.” Nevertheless, the main characteristics of the new government-sponsored private pension law remain similar to its 2008 proposal.

There are some who could stand to gain from these extreme changes. Private pension accounts could be beneficial to those who have adequate education and knowledge in finances and those associated with companies in the banking and financial industries. Such individuals could make good decisions about their private pension accounts and benefit from market fluctuations. However, in Armenia, most people have limited knowledge of financial markets and would have a hard time navigating through the complex waters of pension accounts.

In Armenia, long-term financial markets, i.e. capital markets, are not developed and the banking sector does not lend enough. The finance ministry is expecting the new private pension system to contribute to the development of these markets; however, most economists would agree that the ultimate determinant of a desirable pension system should be the well-being of the retirees and not some ulterior motive, such as the national savings rate or the development of domestic financial markets.

The government could contribute to the development of the financial sector by reducing corruption and reining in the underground economy. This could be done by focusing on the behavior of large businesses and powerful families, prosecuting illegal acts, promoting open and transparent governance, requiring accurate accounting, and fostering an environment where the public increases their bank deposits, businesses borrow more from banks and banks increase their lending.

Instead, the government is hoping to stimulate the markets by privatizing the pension system, which imposes much greater risks on the majority of the retirees, who, in general, are not very knowledgeable about the functioning and inherent risks of the financial markets.

It is true that like many other countries in the world, Armenia also is facing the problem of an aging population, which could increase the cost of maintaining a pension system. Therefore it is important for us as Armenians to discuss and figure out the best pension system which would both deal with future demographic challenges and be fair and sustainable. There are many possible alternatives—such as notional or public, private, mix private and public, etc., pension systems—to the existing model.

Pension reforms affect every citizen of the country and changes are costly; therefore they should be adopted only after a significant amount of national debate and, if possible, a consensus. The whole country should discuss and debate different options of pension systems. Unfortunately, there was only very limited discussion in the Armenian National Assembly and the media. A non-political, professional state agency—such as the National Statistical Service—should initiate simulations and actuarial analysis of different pension options and present the results to the parliament and the public for debate. Only then should Armenia adopt a new pension system.

Putting the Burden on the Poor

An income tax system without any deductions is extremely unfair, because if someone earns about 40,000 dram monthly (slightly more than $100) then that person has to pay about 25% income tax, which is 10,000 dram. This person has to cut his/her spending on food and other necessities in order to pay the income tax and will suffer significantly. For this reason, the income taxes of almost every country in the world allow for the deduction of a certain amount, usually equal to the established poverty line or the income earned annually based on the minimum wage.

If we agree that a tax system without any deduction is highly unjust, then why has Armenia’s government supported such an unfair system? I asked this question to an individual who was familiar with the development of this new income tax law and this was the answer that I received.

Currently a very large number of employees claim that their monthly income is less than 30,000 dram; therefore they evade paying income taxes. In order to reduce this kind of income tax evasion, the government decided to eliminate the 30,000 dram standardized deduction.

This explanation is not convincing because the government, instead of penalizing the poor and the middle class, could make a serious effort to collect taxes from businesses, companies and rich, powerful families. If the government aggressively tries to collect taxes from large businesses and wealthy families, then the rich will have an incentive to declare the amount of wages and salaries they are paying to employees, because wages and salaries are considered tax-deductible costs.

In democratic and developed countries it is very difficult for employees to hide their income and evade paying taxes because the government makes a serious effort to collect taxes from businesses, who report the incomes of their employees. Therefore the opponents of the new income tax law could argue that the government, instead of adopting an unfair income tax law and imposing a very large tax burden on lower income families, should take serious steps to collect taxes from businesses and the elite.

The second unfair aspect of the new income tax law is the two tax rates, which are very close to each other—24.4% and 26%. Practically speaking, this is almost a flat tax system.

A flat tax is widely considered unfair because it makes the tax burden on low income families much higher than the burden on upper middle class and rich families. For instance, it is much more difficult for a family with a monthly income of 100,000 dram to pay a 24.4% tax, than for a family with an income of 500,000 dram to pay 26% because, once again, in order for the lower income family to pay a 24.4% tax, they need to cut spending on bare necessities, such as food and medical care.

Most economists agree that in order to generate a fair tax system, the burden of the tax should be distributed equally. This can be done through a genuinely progressive income tax with noticeably different tax rates, instead of a system with just one flat rate.

I do not know if there is a country in the world with an income tax system that has no standardized deduction and at the same time has only one income tax rate. No democratic country operates such a socially unjust and anti-poor tax system as the one that Armenia’s government has recently adopted.

Privatization of the pension system places undue risks on low income employees and exposes them to the risks of being without an adequate amount of income upon retirement. In the case of income taxes, eliminating the standardized deduction and having practically a flat tax system places a heavy burden on lower income earners who are the least able to afford it.

Lower income families in Armenia will be the unfortunate victims of these two significant changes in the financial system made by the National Assembly. Armenia urgently needs political institutions and forces to protect the interests of the poor and low income families. If the government of an industrialized democratic country adopted such an unfair income tax law, there would be major street demonstrations and possible clashes with police. In Armenia, on the other hand, there has hardly been any discussion about these topics.

Hopefully the progressive forces in Armenia would be able to generate public awareness about these two unfair laws and put pressure on the government in order to reverse these harmful decisions.