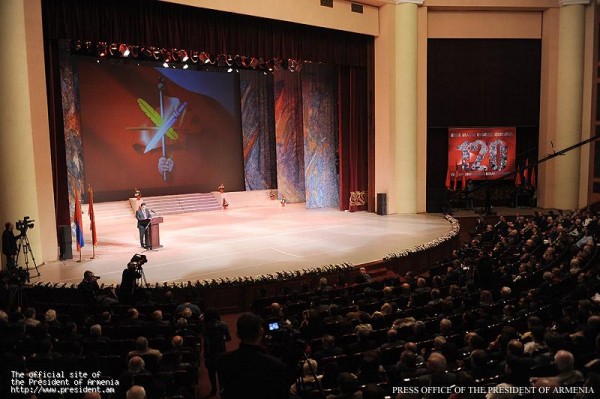 YEREVAN — The 120th anniversary of the Armenian Revolutionary Federation-Dashnaktsutyun was marked at two events Sunday, the first a reception with the participation of other political party officials, embassy representatives and government figures, the second, a public celebration that brought together a capacity crowd representing a cross section of the city’s population at the Spandarian Opera and Ballet Theater.

In his remarks at the event, ARF-Dashnaktsutyun Supreme Council of Armenia chairman Armen Rustamyan said events marking the ARF-Dashnaktsutyun’s anniversary have traditionally served as forums to discuss national issues of interest to all, since the “ARF-D’s work has never been and cannot be separated from the lives of those in Armenia and national issues.”

“It is difficult to imagine any other evidence of living with the fate of the people and working for the people than the fact that the ARF-Dashnaktsutyun is celebrating its 120th anniversary with the people by presenting a report to the people,” added Rustamyan.

Armenia’s Diaspora Minister, Hranoush Hakopyan, congratulated the party on its anniversary and said, “Today, with its new role, the party is working to bring about a positive approach toward the advancement and enhancement of the Armenian state and homeland.”

“We have a considerable amount of ideological differences. However, at times we are able, in strategic issues, to bring together our forces. Past events have proven that such efforts have created a beneficial climate for the Republic of Armenia,” said Galoust Sahakyan, a representative of the ruling Republican Party of Armenia.

Extolling the role the ARF has played in history, Heghine Bisharian of the Country of Law party said, “Today, the ARF-Dashnaktsutyun plays a significant role in not only Armenia’s domestic but also foreign policy of Armenia.”