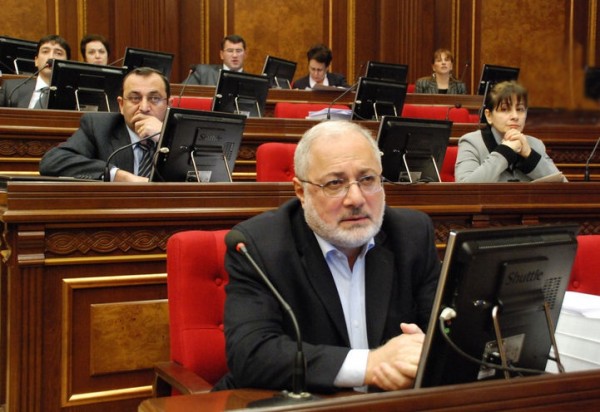 YEREVAN – A boycott by the Armenian Revolutionary Federation-Dashnaktsutyun of an extraordinary year-end session of parliament has caused the government to postpone part of an extensive legislative package designed to push more than a hundred bills through parliament in a matter of days.

The boycott led to the removal from the agenda of 24 out of the 141 bills proposed by the government. Those bills included draft amendments to the laws on auditing activity and trade and services, as well as amendments to Armenia’s civil code, lithosphere code and justice academy code.

Speaking during the parliamentary session Friday, the ARF-Dashnaktsutyun’s parliamentary leader, Vahan Hovhannesyan, welcomed the government’s withdrawal, but criticized the extraordinary session. “Did we need a boycott of a whole faction, or negotiations with the National Assembly speaker to withdraw 24 draft laws from an ill-natured session?” he asked.
He did, however, describe the government’s reaction to the boycott as a “unique case of a parliamentary struggle that yielded a successful ending.” “No one says that we are fully satisfied with the decision of the government, but we say that this is a success,” Hovhannesyan added.

Among the 141 bills being proposed by the government are amendments to laws regulating construction, mining and the state pension system, as well as an effort to push through amendments allowing the existence of private foreign-language schools in the country—a highly controversial issue with significant opposition.

The National Assembly began debating the government’s five legislative packages on Monday under a so-called “accelerated procedure” that effectively precludes their in-depth discussion by deputies.

“This is not the first time that, on the eve of the new year, right after the end of the [regular parliament] session, the government is bringing a huge number of bills — 141, according to our calculations — to the National Assembly for passage,” Hovhannesyan, said Tuesday. “What they should have done in the course of the year they are trying push through now.”

“We don’t accept this style,” he said, adding that he and the 15 other members of the ARF-D faction in the 131-member assembly will not take part in further debates and the votes on the government package.

Hovhannesyan had explained the bloc’s decision by outlining that the short period of time, during which the bills are to be passed, does not allow members of parliament to properly acquaint themselves with the bill, make recommendations, and allow the government to process those suggestions.

“It is evident that the government will not accept any changes and as a result the bloc has opted out of the session and is urging other parliamentary factions to do the same,” he said.

Representatives of the Heritage faction, the other opposition party represented in the parliament, had also denounced the government but decided not to boycott the session. Some deputies from the governing coalition Prosperous Armenia Party also echoed the ARF-Dashnaktsutyun’s concerns.

Heritage, for its part, welcomed the decision to withdraw the bills and went on to urge the government to also withdraw the laws on garbage collection, pension reform, and language from the agenda.