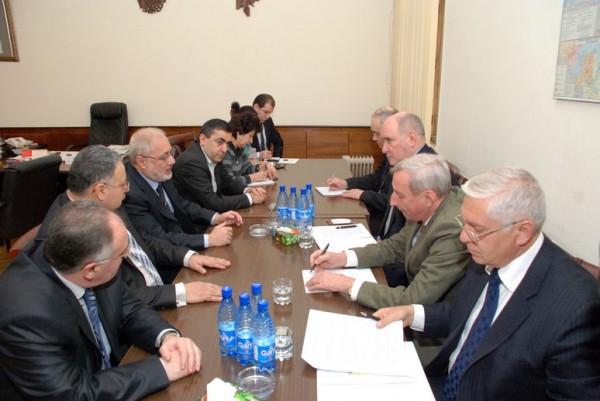 Russia’s Deputy Foreign Minister Grigory Karasin discussed the political situation in Armenia with leaders of the political parties represented in parliament during a visit to Yerevan this week.

The Deputy Foreign Minister met with members of the ARF-Dashnaktsutyun parliamentary faction. The sidies discussed the settlement of the Mountainous (Nagorno) Karabakh conflict and Armenian-Russian relations.

Touching upon the Karabakh problem, leader of the faction Vahan Hovhannisyan noted that the resolution of the conflict is only possible through peaceful way, in accordance with the well-known principles: exclusion of use or threat of use of force, right of self-determination, territorial integrity. It was noted that the Armenian people would not accept Karabakh being part of Azerbaijan, as it would mean that Karabakh will have the destiny of Nakhijevan (which was ethnically cleansed of Armenians by the Azerbaijan SSR). In this context, the sides touched upon the activity of the OSCE Minsk Group. Referring to the Armenian-Russian relations Hovhannesyan said that the ARFD had counterpart relations with the Yedinaya Rossiya (Just Russia) party.

According to Armen Rustamyan, chairman of the National Assembly’s standing committee on foreign affirs and chairman of the ARF-Dashnaktsutyun Suprem Council of Armenia, in the negotiations Azerbaijan’s stance is “Take everything, give nothing.” In this context and stressing the issue of security, Rustamyan asserted that Karabakh shall be independent of Azerbaijan. He noted that in in reality Azerbaijan does not want to settle the problem peacefully and wants to take the issue to other international instances.

Touching upon the raised problems Grigory Karasin expressed conviction that negotiations around the Karabakh problem should go on within the OSCE Minsk Group. He highlighted the achievement of mutual agreement between the presidents of Armenia and Russia. Mr Karasin considered impermissible the restart of war actions.