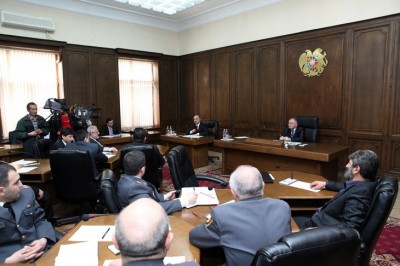 the initiative of the NA Standing Committee on Defense, National Security and Internal Affairs parliamentary hearings on the theme “The Reforms in RA Police Sphere” were held, where NA deputies, representatives of police, national security, prosecutor’s office, human rights protection and other NGOs and mass media took part.

In his opening speech the Chairman of the NA Standing Committee on Defense, National Security and Internal Affairs, ARF-D member Hrayr Karapetyan reminded that these were the second parliamentary hearings on this theme, and from now on they would be regularly convened to introduce the procedure of the reforms underway and present relevant proposals. Karapetyan thanked the OSCE Yerevan Office for supporting the reforms of the system, especially works of creating the police posts in Yerevan. At the same time he expressed hope that as a result of reforms the public’s trust and positive attitude towards the police would be strengthened.

RA Deputy Chief of Police Artur Osikyan gave a report on the reforms of the police sphere. The speaker said that the programme had 11 directions and 200 events. He touched upon the structural reforms, the investment in a civil special service, the problems of the community police development through the creation of the police posts, the investment programmes of the observation system, the educational reforms, training of the personnel, the input of the new passport system, the simplification of the document turnover relating to giving citizenship, the social-legal protection, trafficking, spreading of drugs, programmes of fighting against organized crime, and other issues.

The speaker also answered the numerous questions regarding the reforms.

The Deputy Head of the OSCE Yerevan Office Karel Hofstra highlighted the ongoing reforms, ensured that their organization would continue to cooperate with RA National Assembly and the police. He welcomed the cooperation with the civil society in the works of the implementation of the programmes.

The head of the Achilles NGO Edward Hovhannisyan in his speech touched upon the existing problems in the sphere of police and indicated ways of rectifying them by concrete proposals.

In his concluding speech Hrayr Karapetyan thanked the participants for the active discussions, recorded with satisfaction that during this short period considerable reforms had been made in the system of police and expressed conviction that many existing malfunctions would be rectified and the problems would be jointly solved, as a result of consistent work.