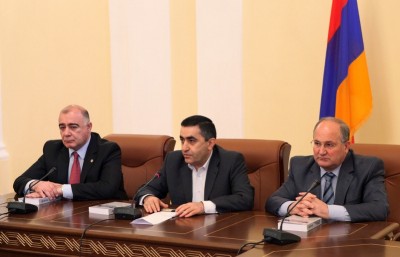 The presentation of the book “Armenian-Turkish Relations: Problems and Perspectives” was held in the National Assembly.

Armen Rustamyan, Chairman of the ARF-D Supreme Council of Armenia and Chairman of the NA Standing Committee on Foreign Relations, had an opening speech saying that the collection is the summing up of the stenography of the parliamentary hearings, which were held on the initiative of the Committee. The book includes the reports sounded during the hearings, questions and answers and important documents regarding the issue.

Highlighting the role of the Armenian-Turkish relations in the sphere of the foreign policy of our country, Rustamyan noted that the issue was not limited to bilateral relations, rather by its inclusion and importance has geopolitical implications for the whole region. The collection of documents in the book is designed for the state and public organizations concerned about the issue, specialists, and the general public and can be useful to the development of parliamentary diplomacy.

Rustamyan thanked the NA Standing Committee on Foreign Relations, the Eurasia Cooperation Fund and the International Development and Cooperation Agency of Sweden for supporting and assisting in publishing the book; he also thanked historian Babken Harutyunyan for providing the maps.

NA Vice Speakers Samvel Nikoyan and Samvel Balasanyan congratulated the Committee and its head Armen Rustamyan for publishing the second collection (the first collection includes the proceedings of the parliamentary hearing and documents on the Mountainous Karabakh conflict) and expressed hope that the Committee will continue to provide the readers with new publications concerning the foreign policy issues of high importance for our country.

In their speeches the NA deputies Tigran Torosyan, Vahan Hovhannesyan, Artsvik Minasyan, Styopa Safaryan and RA Deputy Foreign Minister Shavarsh Kocharyan touched upon the past and present of the Armenian-Turkish relations, the importance of the book and expressed words of congratulation.