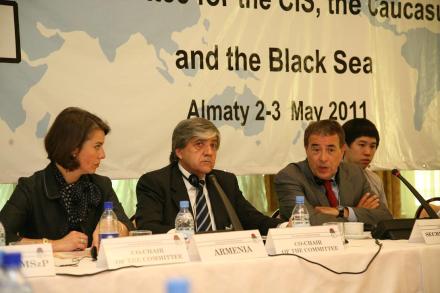 The Socialist International Committee for the CIS, the Caucasus and the Black Sea convened in Almaty, Kazakhstan on 2-3 May 2011, at the first ever meeting of the Committee to be held in Central Asia. Discussions centred upon democracy in the region, with the Committee also comprehensively expressing its full support for the Nationwide Social Democratic Party ‘AZAT’ (NSDP ‘AZAT’), Kazakhstan, which hosted the meeting, ahead of expected parliamentary elections. When examining the issue of democracy, particular emphasis was also paid to the ongoing political repression in Belarus, where many political prisoners remain incarcerated on politically motivated charges and at risk of long periods of imprisonment.

At the opening of the meeting, which was chaired by Mario Nalpatian (ARF-D, Armenia) and Alexandra Dobolyi (MSzP, Hungary), Co-Chairs of the Committee, Zharmakhan Tuyakbai, Co-Chair of NSDP ‘AZAT’ welcomed participants to Almaty, recognising the development of the party’s links with the SI over recent years, and the significant impetus the holding of the meeting would give to the development of social democracy in the Central Asia region. On the specificities of the situation in Kazakhstan, he outlined the unacceptable levels of inequality and authoritarianism which exist, and the importance of the advancement of social democratic values such as freedom, justice and solidarity. Later, NSDP ‘AZAT’ Co-Chair Bulat Abilov elaborated on Kazakhstan’s democratic shortfall, epitomised by the current composition of the its parliament, where only the ruling party is represented, and the difficulties faced by NSDP ‘AZAT’ in its efforts to be officially registered and recognised as a political party.

In opening remarks, SI Secretary General Luis Ayala stated that the presence of the Committee in Kazakhstan was a proud moment for the organisation. In these times of reaffirmation of democracy in the world, he added, the presence of the global organisation of social democrats in Almaty had a particular significance in light of the deficit of democracy and sense of political exclusion felt by citizens in Kazakhstan. He noted that within the CIS region, the presence of democracy was far from uniform, with some countries suffering from a complete absence of democracy and non-participatory processes, whilst others had developed nascent democratic systems which need perfection and support. He underlined that social democracy has become an integral part of those democracies that deliver for their people, and that the social democratic movement can build fairer and more participatory political systems.

On Belarus, reports were heard from Marina Adamovich (Belarusian Social Democratic Party, BSDP-NH) and Ihar Maslouski (BSDP-H) regarding the ongoing political crisis in that country since the presidential elections on 19 December 2010, when eight out of the nine opposition presidential candidates were arrested. Members of the Committee noted with great regret the absence of presidential candidate and chair of the BSDP-NH Mikalai Statkevich, always present at previous meetings of the Committee, who remains in a KGB prison unable to see friends and family and with access to his lawyers severely restricted. The election and its aftermath had become a catalyst for the suppression of any political activity and indiscriminate persecution, incarceration, beating and torture of opponents of the regime. Participants were united in their condemnation of the holding of political prisoners by the Belarusian authorities. The importance of international support and solidarity, and the influence that pressure from the international community could have on the authorities of Alexander Lukashenko were highlighted.

During discussions on the challenges to democracy in the CIS and the Caucasus, many delegates made reference to the role of the SI in seeking solutions to these questions. The widespread presence across the CIS of political systems which do not genuinely allow the electorate to make a choice was noted. In reports on national situations, participants from Armenia, Azerbaijan, Georgia, Kyrgyzstan and Ukraine made reference to their specific concerns with regard to internal political developments. The holding of the meeting in Central Asia for the first time also allowed invitations to be extended to social democratic parties from neighbouring Tajikistan and Uzbekistan, countries which face serious barriers to democracy, underlined by the inability of the Uzbek delegation to attend due to restrictions imposed by the authorities. Addressing the meeting, Rahmatullah Zairov, leader of the Social Democratic Party of Tajikistan drew attention to the similarities between the anti-democratic methods employed by the presidents of Tajikistan and Belarus. 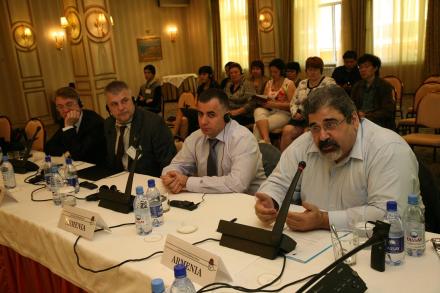 On conflict resolution, the Committee continued its discussions on Mountainous (Nagorno)-Karabakh and pledged to remain actively engaged and continue its work in Armenia and Azerbaijan, engaging with all relevant political actors in those two countries. The situation in Georgia was also discussed, with a decision taken to hold a workshop bringing together Russian and Georgian social democrats. This group would take stock of the situation in Georgia, paying particular attention to the unresolved issues in Abkhazia and South Ossetia, with the aim of finding common social democratic proposals on these questions.

The meeting concluded a with declaration of support for the NSDP ‘AZAT’ in their attempts to re-register with the electoral authorities in Kazakhstan in advance of the parliamentary elections, a process which has been ongoing for one and a half years. In the view of the Committee, if free and fair parliamentary elections were allowed to take place in Kazakhstan, this would result in substantial representation of the opposition in parliament. The Committee further expressed its solidarity with its member party the BSDP-NH and opposition forces including the BSDP-H undergoing persecution in Belarus and called for the immediate and unconditional release of all political prisoners held in that country.

Participants also agreed on a programme for the future work of the Committee, in order to build upon the progress made in Almaty. In line with the support expressed for the NSDP ‘AZAT’ with regard to the forthcoming elections, a commitment was made to accompany that process with an observer delegation of the Socialist International. It was further decided to advance the work of the International in Central Asia, developing new contacts made with social democratic parties of the region. In this regard, Zharmakhan Tuyakbai, Co-Chair of the NSDP ‘AZAT’ was nominated to head a future fact-finding mission of members to Tajikistan and Uzbekistan, to meet with social-democratic parties and civil society actors.

Following the closure of the meeting, a well-attended press conference was held to present a summary of the conclusions reached over the two days.