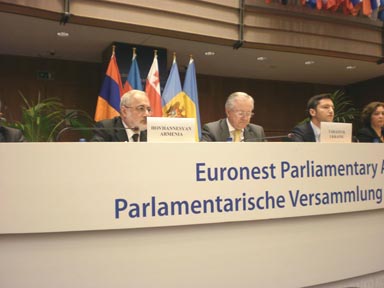 The EURONEST Parliamentary Assembly was devised to provide a parliamentary dimension to the EU’s eastern partnership, as part of the EU’s neighborhood policy. It consists of 60 members of the European Parliament and 10 members of parliament from each of the five eastern partner countries. Belarus is a special case: although a part of the eastern neighborhood, there was much discussion about how to allow its participation in EURONEST without giving legitimacy to Alexander Lukashenko’s regime. In the end, the constituent meeting was held without any representatives from Belarus in attendance.
“We have created a powerful tool today,” said EURONEST Co-President-elect Kristian Vigenin (S&D, BG) at the end of the constituent meeting.
The EURONEST Parliamentary Assembly’s constituent meeting was opened by EP President Jerzy Buzek, who observed that the democratic reform processes of the eastern partner countries must be strengthened.
“Stable countries can only be democratic countries; democracy is the only way to stability,” he said. He added that the Parliamentary Assembly was crucial in bringing citizens of this region closer together. “If we want more cooperation and more integration, we have to start with parliamentary cooperation, because it represents contacts between people,” he said.
Adjourning the meeting, Co-President Kristian Vigenin emphasized that “this assembly is one of two equal partner components: equal in rights and responsibilities,” and expressed his confidence that EURONEST members will live up to both.
At a press conference following the session, he stressed that “the establishment of this body is the strongest signal we could send” about the potential for cooperation between the EP and the eastern partners.
Co-President Borys Tarasyuk (Ukraine) echoed this view, and also appealed to all European Union institutions not to give in to the temptation to divert attention and funds from the eastern to the southern neighborhood.
The Parliamentary Assembly adopted and signed its constitutive act, approved its rules of procedure, set up two working groups (on Belarus and the Rules of Procedure) and formed four committees (one on Political Affairs, Human Rights and Democracy; one on Economic Affairs, legal approximation and convergence with EU policies, one on Energy Security and one on Culture, Education and Civil Society).
It also elected its two Co-Presidents, Vigenin and Tarasyuk, as well as eight Vice-Presidents, to form a Bureau: Vahan Hovhannesyan (Armenia), Elkhan Suleymanov (Azerbaijan), David Darchiashvili (Georgia), Igor Corman (Moldova), Traian Ungurenau (Romania), Ryszard Czarnecki (Poland), Gerben-Jan Gerbrandy (Netherlands) and Jacek Saryusz-Wolski (Poland).