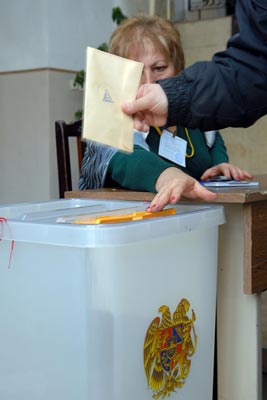 The Armenian Parliament on Tuesday voted 76-12 to adopt in the second reading a package of electoral reforms, with the “nay” votes coming from the ARF-Dashnaktsutyun party’s faction. The other opposition faction, Heritage, opted out of the vote.

In all, 90 amendments have been introduced into the law regulating the conduct of elections, among them is an amendment allowing filming during the voting process by a candidate’s proxy. Among other significant amendments are: the Central Election Commission (CEC) must have at least two women and two members of the Commission must have an education background in law; a permanent control and supervision service will be established to follow the use of means allocated to electoral commissions and electoral funds; the total number of voters must be announced a day before the election; the CEC must place all information about the election process on its website. Besides, amendments envisage that all state and municipally owned halls must be provided free of charge to those engaged in election campaigns.

Armenia’s leading opposition groups dismiss the amendments as insignificant, however. They have also denounced the parliament majority for rejecting virtually all major proposals made by them.

The Venice Commission of the Council of Europe, however, submitted its observations concerning the document. The document has also been harshly criticized by lawmakers representing Dashnaktsutyun.

Only a reform that, when realized, will lead to the current leadership’s losing its power can be considered to be a true reform, stated head of the Dashnaktsutyun faction in parliament Vahan Hovhannesyan. According to him, after current amendments the leadership, by contrast, ensures legal mechanisms for its reproduction.

Hovhannesyan noted that the only guarantee of not allowing electoral fraud is the publication of voter lists after the polls. In addition, Heritage and Dashnaktsutyun have insisted on the representation of the opposition and government in electoral commissions on a parity basis.
Meanwhile, the OSCE Office for Democratic Institutions and Human Rights and the Venice Commission provided their conclusion on the draft Electoral Code of Armenia. They primarily suggested that the order of the formation of election commissions be revised in order to ensure the independence of activities of these commissions and public trust towards them.
Head of the Parliamentary Commission on State and Legal Affairs David Harutyunyan noted that the Commission did not accept three of the four proposals made by Dashnaktsutyun. “In the first proposal Dashnaktsutyun advocated 100-percent party-list elections, which, at the present stage, does not meet the demands of our country. Secondly, they demand publication of lists of voters attending the polls after the closure of polls, but experts of the Venice Commission have always considered it to be a breach of the principle of secret ballot. The third proposal concerns the calculation of votes according to the number of envelopes. However, these proposals will only raise questions with someone who has a relevant experience,” said Harutyunyan.

One amendment strongly advocated by the ARF-Dashnaktsutyun and other opposition forces would require electoral authorities to publish the lists of voters who have cast ballots in an election. Opposition politicians say this would be an effective safeguard against multiple voting, one of the most serious irregularities that have marred Armenian elections.

The parliament majority rejected the idea. It only agreed to add a clause allowing opposition proxies to sit next to election officials managing vote registers on polling days. Harutiunian said the proxies will be in a position to prevent possible fraud, a claim disputed by Dashnaktsutyun parliamentarians.

According to statistics, 1.2 million people have left Armenia, which means that about 800,000 eligible voters are absent from the country. But their names have been included in the voter registers during almost every election, just like the names of some 50,000 deceased people who in recent years were also on pension payment lists.

Armenian electoral legislation has been repeatedly amended in the past. But those changes have clearly failed to address a culture of electoral fraud that has been the main source of political upheavals in Armenia since the mid-1990s. Opposition representatives say good laws are not enough to hold elections widely recognized as free and fair.

“Armenian authorities have preferred to make numerous amendments or adopt new election codes just to show that radical changes are underway,” Armen Rustamian, a senior Dashnaktsutyun deputy and chairman of the ARF-D Supreme Council of Armenia, told the press. “But the problem remains unresolved.”