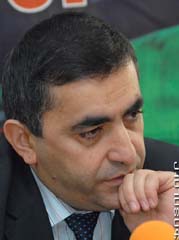 At a press conference held today at ARF-D Supreme Council’s “Simon Vratsyan” premises, Armen Rustamyan Chairman of the Council and Member of the Parliament gave the press representatives a retrospective of the Party’s main initiatives taken during 2011. ARF-D started the year by proposing reforms of the Electoral Law. Rustamyan said that the propositions of ARF-D were in the right direction but were turned down by other political parties. Following, ARF-D initiated the “Vote is Power” movement and tried twice to move a motion of no-confidence against the government that is not implementing the policy that the coalition-government parties had agreed upon. This obligation should be established by law. Rustamyan said that the Party needs 27 deputies’ signatures in order to take this issue to the Constitutional Court. And in case this doesn’t become possible until January 20 then ARF-D will appeal to the Ombudsman so as to appeal to the Constitutional Court through him.
Rustamyan made a special reference to the collaboration with the Heritage (Zharankutyun) Party particularly in the process of reforming the Electoral Law. He mentioned that a lot of political forces are supporting ARF-D and Heritage Party’s joint proposition to abolish the single-seat constituency list and adopt a one 100% proportional system. Rejection of this proposition by the ruling party would isolate it and persisting on maintaining it would show everyone that its only interest is reproducing itself and staying in power since 99 percent of the times a candidate of the ruling party takes the seat. Rustamyan expressed his hope that this collaboration could have its “spillover” effect in other fields as well not only on the political parties but on the entire society.