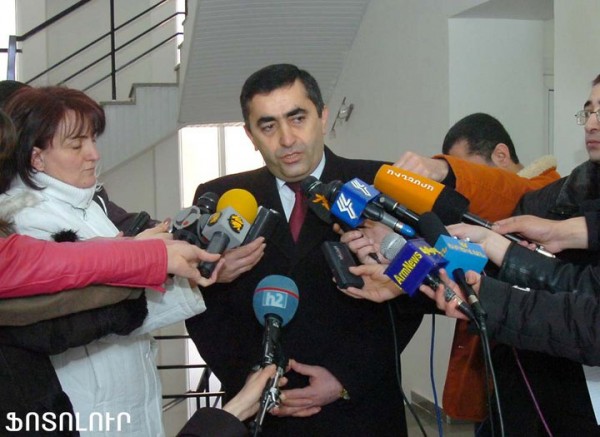 The two opposition parties represented in the National Assembly said on Monday that they will force a parliament debate on a voting reform which they believe would increase chances for the proper conduct of this year’s Armenian parliamentary elections.

In a joint statement issued late last month, the Armenian Revolutionary Federation-Dashnaktsutyun and the Heritage (Zharangutyun) party called for the abolition of elections held in single-seat constituencies.

Armenia’s existing electoral legislation distributes 90 of the 131 parliament seats under the system of proportional representations. The remaining deputies are elected on the first-past-the-post basis in 41 constituencies. The opposition has long demanded that proportional representation be extended to the entire assembly, saying that besides other positive consequences it carries more safeguards against electoral fraud.

According to Armen Rustamyan, Chairman of the ARF-Dashnaktsutyun Supreme Council of Armenia, Dashnaktsutyun and Zharangutyun will officially circulate corresponding amendments to the Electoral Code in the coming days. “We will thus ascertain the official view of the parliamentary majority,” Rustamyan told RFE/RL’s Armenian service (Azatutyun.am). “One should not be guided by statements made [by majority representatives] here and there.”

Under Armenian law, the opposition minority in the National Assembly can include any issue on the parliament agenda once a month without the majority’s consent. Rustamyan said Zharangutyun and Dashnaktsutyun deputies will use this right if the pro-government majority opposes a debate on the issue.

Majority leaders have already rejected the idea of holding the elections due in May on a solely party-list basis. They say that government-backed amendments to the Electoral Code enacted in May 2011 are enough to minimize the risk of serious fraud.

In his New Year’s address to the nation, President Serzh Sargsyan insisted that his administration is committed to making sure that the upcoming vote is free and fair and does not regard it as a means of clinging to power at any cost.

Rustamyan said that rejection of the opposition bill would “mean that these are empty statements and that their sole aim remains ensuring the self-perpetuation of their regime.” “The ball is now in their court,” he said.

The idea of abolishing single-mandate constituencies is also strongly backed by the Armenian National Congress (HAK), another major opposition group not represented in the current legislature. The HAK’s relations with Dashnaktsutyun and Zharangutyun have been strained until now.

Ruben Hakobyan, Zharangutyun’s deputy chairman, confirmed that the two parties are ready to cooperate with the HAK on both the voting reform and the election conduct.

Rustamyan agreed, saying that the reform initiative is already resulting in a “consolidation” of the Armenian opposition. He said the country’s leading opposition forces should, in particular, set up joint teams of proxies that would fight to prevent vote rigging in all of about nationwide 2,000 electoral precincts.

The pro-government majority in the Armenian parliament will reject an opposition proposal to hold the upcoming parliamentary elections on a solely party-list basis, a senior lawmaker from the ruling Republican Party (HHK) said on Tuesday. Hovhannes Sahakyan said Armenia’s governing coalition has made a “political decision” not to make further changes in the Electoral Code before the elections due in May. He repeated HHK representatives’ assurances that the code provides for their proper conduct.

Sahakyan made clear, however, that while the parliament majority is ready for such a debate it will block the opposition bill in the end. He dismissed opposition arguments that vote manipulation has been particularly widespread in elections held in the single-mandate constituencies. Sahakyan also claimed that the opposition bill is unconstitutional.