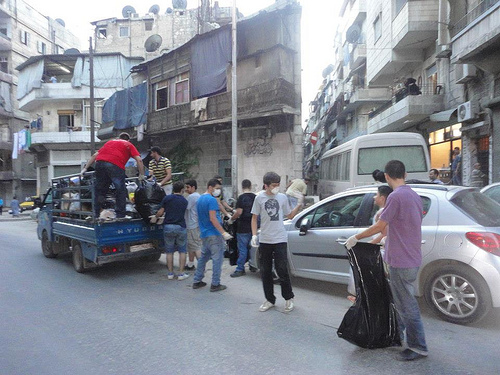 YEREVAN (Irina Hovhannisyan / RFE-RL)–Armenia must not encourage a mass out-migration of ethnic Armenians from Syria and thereby eliminate a key Diaspora community in the Middle East, the Armenian Revolutionary Federation (Dashnaktsutyun) said on Wednesday.

“People willing to come here must be helped, but we must not initiate their relocation,” said Giro Manoyan, the foreign policy spokesman for the opposition party which is particularly influential in Armenian communities abroad and Syria in particular.

“Our approach is as follows: the community must stay on in Syria … and we must come out of all this with minimal losses,” Manoyan told RFE/RL’s Armenian service (Azatutyun.am). “Breaking up a community is relatively easy but organizing a community is very difficult. In these conditions keeping an organized community is much easier, even with all the difficulties involved, than creating an atmosphere of panic and making accusations.”

Manoyan voiced Dashnaktsutyun’s position amid growing domestic calls for Armenia’s government to do more to help tens of thousands of ethnic Armenians increasingly endangered by the violent unrest in Syria. The national airline, Armavia, is also under fire for flying to Syria only once a week and allegedly apparently its ticket prices.

Manoyan said that while Dashnaktsutyun accepts the need for more such flights it believes that the Armenian government should tread carefully to avoid creating “panic” among Syrian Armenians. He insisted that the latter have no intention to flee Syria en masse and that Yerevan will be unable to evacuate all of them in any case.

“We are not encouraging them to leave their homes and move abroad,” he said. Dashnaktsutyun is instead working with various Syrian “political circles” to ensure the security of the local Armenian community, he added.

The Dashnaktsutyun chapter in Syria has for decades been the most influential community organization.

On July 23, in an interview with Yerkir Media TV, ARF-D Bureau chairman Hrant Margaryan noted that Armenians are an integral part of Syrian society, and as such it’s expected that instead of fleeing, Armenians remain and weather these difficult times with their neighbors. He stressed, however, that in no way does he blame those Syrian Armenians who wish to immigrate to Armenia. Margaryan, too, was skeptical about reports of a large influx of Syrian Armenian immigrants, considering it a temporary move or tourism, not permanent out-migration. He also criticized media reports of Syrian Armenian immigration, and warned against inadvertently encouraging it or creating panic.

“Let’s be fair and recognize that unfortunately our country is not the sort of country that can handle a large number of refugees,” said Margaryan, adding that currently Armenia is not able to house or support financially needy refugees, given that the current poorer segments of Armenia are not receiving such treatment.

Between 90,000-100,000 Armenians call Syria home. More than half of them live in Aleppo, with the other half scattered in such cities as Latakia, Homs, Qamishli, Hasakeh, Yaqubiye, Raqqa, Kessab, and the capital Damascus.