The meeting of the SI Committee for the CIS, Caucasus and Black Sea was held in Chişinău on 23-24 July and hosted by the Democratic Party of Moldova and was attended by representatives of the member parties from Moldova, Belarus, Georgia, Ukraine, Russian Federation, Kazakhstan, Armenia, Poland, Hungary and Greece. 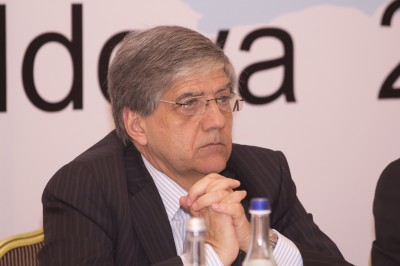 In its agenda, the committee discussed three main themes: the economic outlook for the CIS, the Caucasus and the Black Sea: incorporating regional perspectives in a global social democratic view; strengthening democracy and overcoming authoritarianism: securing rights and freedoms in the countries of the region; and the path of dialogue and negotiations to overcome regional disputes and conflicts.

Participants were warmly welcomed to Chişinău by Marian Lupu, chair of the PDM and speaker of the Moldovan parliament. Lupu expressed the great satisfaction felt by his party at hosting such a meeting of social democrats from the region, where reports, ideas and initiatives could be exchanged. He highlighted the progress that had been made on the issue of democracy in the Republic of Moldova, and the vision of the PDM for a sustainable future for the country based on social democratic values. Other perspectives from the PDM were also added to the discussions by ministers and members of the party leadership in their interventions. (list of participants)

The holding of the last meeting of the committee before the XXIV Congress in Moldova was symbolic of the progress and advance of social democracy in the region. In his opening remarks, Luis Ayala, Secretary General of the SI recalled that in 2009, at the first meeting of the committee after the XXIII Congress, great concern had been expressed over the fate of democracy in Moldova, with a strong call made for new elections. Political developments over the intervening period had shown that the struggle for democracy in the region could be won, bringing people together to remove obstacles and divisions.

Discussions over the course of the two-day meeting were chaired by Mario Nalpatian (Armenia, ARF-D) and Alexandra Dobolyi (Hungary, MSzP), the co-chairs of the committee. During exchanges on the economic outlook for the region, there was a consensus that the global nature of the financial crisis and interdependence of world economies meant that the countries of the region were all subject to external factors. A common challenge for countries of the region was to increase salaries as a proportion of GDP, which remain low and are a contributing factor to inequality and slow economic development. In addition to these universal concerns, delegates reported on the more specific challenges facing their countries in relation to the economy, which included the problems presented by emigration and a dependence on remittances in countries with large diasporas. Economic prospects are also closely linked to the political situation, with authoritarianism and corruption depriving citizens of opportunity and prosperity and wealth concentrated in the hands of a powerful elite.

The democratic challenge is a crucial struggle, and exchanges on the second main theme focused on the democratic deficit that continues to exist in a majority of countries of the region. In Belarus, the Socialist International has consistently made calls for the release of Mikalai Statkevich and all other political prisoners, many of whom were incarcerated following the rigged presidential election of 2010 for nothing more than their opposition to the authoritarian regime. Concerns were also raised about the deepening restrictions on democratic freedoms in Ukraine. Both there and in Georgia, elections scheduled for the autumn will be a test of the democratic credentials of their respective political processes. Participants noted that in Kazakhstan and Russian Federation, recent elections had failed to live up to expectations, and much work remained to be done across the region to ensure the pre-eminence of true democracy.

Exchanges on the resolution of regional disputes covered the unresolved conflicts in Transnistria, Nagorno-Karabakh, South Ossetia and Abkhazia, reflecting that the way forward to solve these questions was through dialogue and negotiation. Accordingly, the work of the government of Moldova and PDM towards dialogue to settle outstanding issues in relation to Transnistria was recognised. With regard to other regional disputes, representatives attending the committee from Armenia, Russian Federation and Georgia expressed the positions of their parties on the situations that continue to affect the security of their countries and reported on the latest developments. The role that social democracy could play in conflict resolution was stressed, with an important example the ability of the SI to bring about political dialogue between Armenia and Azerbaijan. Progress would be helped with the strengthening of social democratic parties in the countries involved in conflicts, and the entry of those parties into government, as seen in Moldova. 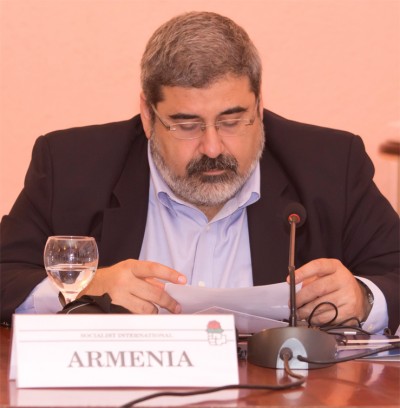 The ARF-D delegation took the floor and made remarks concerning all of the above issues.

At the conclusion of the meeting, a declaration was adopted based on the discussions over the two days, which highlighted the key concerns of those present on the central questions in relation to the economy, democracy and conflict resolution. The declaration also assessed the positive work of the committee in the period since the last Congress. The Committee for the CIS, the Caucasus and the Black Sea has been instrumental in developing relationships between our global movement and social democratic parties in the region, discussing common policy objectives and sharing strategies for the advancement of shared causes.

SI Committee for the CIS, the Caucasus and the Black Sea
Chişinău, Republic of Moldova, 23-24 July 2012
DECLARATION

Gathered in Chişinău on 23-24 July 2012, the Socialist International Committee for the CIS, the Caucasus and the Black Sea discussed the economic outlook in the region, strengthening democracy and dialogue and negotiations in pursuit of conflict resolution. Drawing on the experiences of its member parties and guests from the region, and in light of the unequal and difficult progress made on democracy and conflict resolution, the committee agreed the following:

The incarceration of Mikalai Statkevich, presidential candidate in the 2010 Belarusian presidential election, continues. Gross violations of human rights take place on a daily basis, including the torture of political prisoners and persecution of any opponent of the regime expressing their views. The period since the 2010 elections has seen Belarus further entrench its status as a dictatorial, authoritarian regime. Economic and political sanctions against the regime must continue, but more needs to be done to increase the pressure on the authorities to an extent that positive change can be achieved. This means no less than the unconditional release Mikalai Statkevich and all the other political prisoners in Belarus, and an end to the daily repression of opposition politicians and activists.

In Ukraine, recent actions taken by the president and authorities have severely curtailed democratic freedoms. Leaders of opposition parties have been persecuted for political reasons, and the practice of instrumentalising state institutions for political revenge and imposing selective justice has been introduced. An end must be brought to this descent into authoritarianism, with respect for the principle that political disputes must be settled through democratic means at the ballot box and in parliament, without resorting to politically motivated prosecutions and manipulated judgements in the criminal courts. Political prisoners, including former prime minister Yulia Tymoshenko, should be released in advance of the elections in autumn 2012 to allow for an open, competitive campaign.

Parliamentary elections scheduled for October 2012 in Georgia are of crucial importance for democratic development, in order to prepare the ground for a first transfer of power by democratic means since independence at the presidential elections of 2013, when the incumbent president will end his term in office. In this context, it is vital to bring an end to constraints on the political process and create fair and competitive conditions for political competition. Georgia requires freedom of the media, an end to the use of administrative resources to benefit the incumbent and to refrain from repression against opposition parties and activists.

Based on the SI statement unanimously adopted by the 2010 November SI Council in Paris on the Nagorno-Karabakh conflict, the Committee expressed its concern regarding the recent announcements by Azerbaijan that it will not pull out its snipers from the line of contact with Armenia and Nagorno-Karabakh and continuing threats against the resumption of Karabakh-Armenia civilian flights, contrary to assurances given to the OSCE Minsk Group co-chairs. The SI will continue to build contacts and establish dialogue with like-minded political interlocutors in Azerbaijan to further pursue its work with actors from both parties to the conflict in the search for a peaceful, negotiated settlement.

Participants positively assessed the fact that the international community has gradually come to accept that living in a non-recognised state does not deprive the citizens of that entity from their basic human rights and freedoms, as well as from internationally accepted civil and political rights, including the right ‘to take part in the conduct of public affairs, directly or through freely chosen representatives’, as established in article 25a of the International Covenant on Civil and Political Rights adopted by UN General Assembly resolution 2200A (XXI). It is in this context that recent elections in Nagorno-Karabakh should be viewed.

The committee extends its gratitude to the Democratic Party of Moldova (DPM) for its hosting of the meeting, and recognises its contribution to the political life and development of the Republic of Moldova, firmly establishing social democracy and consolidating the advance of multi-party democracy in the country. Concerning the situation in Transnistria, the committee supports the initiatives taken by the DPM and its partners in the government of Moldova to take incremental steps to establish the conditions for a lasting solution.

The Committee reiterates the positive role played by the Socialist International during the inter-Congress period in bringing together social-democratic parties from across the region, to formulate common policies and advance the shared aims of our movement. Our organisation will remain committed to the universal values of democracy, peace and human rights in the CIS, the Caucasus and the Black Sea as in other parts of the world, and will continue to pursue this agenda in the future.

The Socialist International is the worldwide organization of social democratic, socialist and labor parties. It currently brings together 170 political parties and organizations from all continents. Among the parties of the CIS, ARF-D is the only one to hold a SI full membership status.

ARF-D member Maria Titizian is one of the SI Vice Presidents and ARF-D Bureau member Mario Nalbandian is the CIS, Caucasus and Black Sea Committee’s co-chairperson.