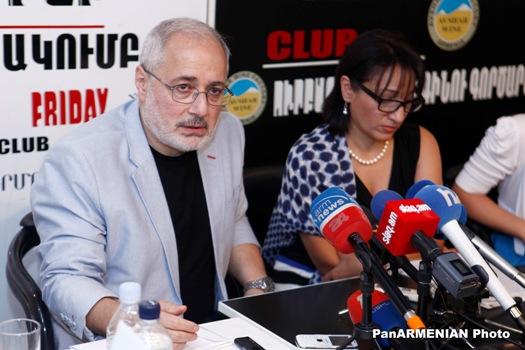 “Help Your Brother” is an ARF-D initiative with the purpose of assisting Armenians in Syria and Syrians in general.
ARF-D Bureau member and parliamentarian Vahan Hovhannesyan and Lilit Galstyan Director of Hamazkayin Armenian Educational and Cultural Association‘s Foundation in Armenia met with the Press yesterday to elaborate on this critical project. Hovhannesyan, underlined how difficult it is for the Syrians to cope with the civil war that is been carried out as well as the negative impact of the Turkish influence in Aleppo that has turned into the focus point of the turmoil. “Even now the “divide and rule” axiom is in effect however now, though they can divide, they cannot rule” said Hovhannesyan and stressed that the Republic of Armenia owes to be in “stand by” mode so as the Armenians remaining in Syria can feel the caring intentions. “This is a civic initiative, there’s no need to attribute a partisan identity to it” he said and added that “naturally, ARF-D will have the most active role to play since ARF-D has the most flexible structure in the region”.
It’s not that Armenians in Syria are left helpless. There are though, Armenians in need, whom we must help, he said. That is the reason why “Help Your Brother” was formed. A lot of humanitarian work has been already done and the first plane will soon land in Syria. Hovhannesyan also made a special reference to the assistance collected by Mountainous Karabakh and which he called enormous. He also mentioned that both Armenia and Mountainous Karabakh’s reaction to this call was fast and adequate.

Lilit Galstyan, described “Help Your Brother” as a movement which has no partisan or ideological affiliation and said that it can embrace anyone. She also announced that to serve this purpose, a bank account has been opened and the sum of 1 million AMD has been already deposited. Galstyan also said that half of the first humanitarian aid has been collected but there is still need for medicines and food.
In order to increase the volume of the aid, Galstyan said that a concert is scheduled to take place in October which will have a fundraising part. “We are open to suggestions” she said.
A good number of businessmen have already expressed their readiness to participate by providing local produce to this initiative.
Hovhannesyan and Galstyan said they’re not optimistic as to the short duration of the war and so assistance will be gathered and sent more than once. Most probably the first mission will arrive in Syria around the end of September. Arrangements are being made so as the plane arrives in safety.