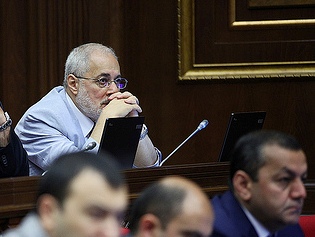 The “through surgical intervention” anticorruption struggle should lead to jail and not to discharge stated ARF-D Member of Parliament, Vahan Hovhannesyan in response to Prime Minister Tigran Sargsyan’s call addressed to the oppositional political parties to join the anticorruption struggle. Hovhannesyan reminded that ARF-D had proposed a legislative measure in order to have a non-authoritative body within the authorities. “The accountable and the controller cannot be combined in the same person. This means that the Council must separated from the government” he said in regard to the fact that the Prime Minister is heading the Anticorruption Council.
Hovhannesyan’s conviction is that the most effective way to fight corruption is by giving that jurisdiction to the opposition. “Who has more interest in finding, revealing and preventing the authorities from making mistakes? The opposition. And when it does so, then the government has more interest in not making mistakes and in not burying itself under corruption. I think this would be the right way. But the Prime Minister’s discontent about the level of the anticorruption struggle today, gives hope that they might see the way I’ve pointed out and reach the right decision” he said. Hovhannesyan doesn’t examine whether this is a pre-electoral move or not, he believes that any step aiming at the welfare of the people is appreciated regardless of its timing. The results will be shown later. Still, Hovhannesyan sees a progress; if in the past, the government would welcome with bayonets the statements that spoke of corruption in the country, nowadays the government has become “more universal than the opposition” when it comes to talking about this issue, he concluded.