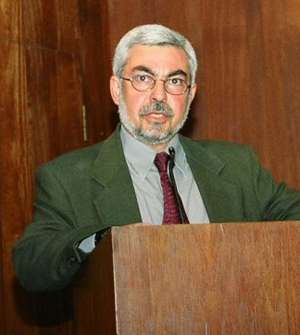 (ASBAREZ) The Armenian Revolutionary Federation (ARF), an opposition party in Armenia, at its recent supreme convention in June 2012 confirmed its policy of “transfer from the presidential to parliamentary form of government.” Since June, the ARF Parliamentarians are incessantly invoking political and intellectual battles to rage over which of the government forms best advances the basic workings of the Armenian democracy and governance.

Policy making and policy implementation in Armenia seem to be regulated by heavy handed presidential authority. The constitutional language concerning presidential power has little if any flexibility for interpretation. The president is clearly given the constitutional authority “to ensure the regular functioning of the legislative, executive and judicial powers” (Chapter 3, Article 49 of the Constitution).

Evidently, many advocates of a strong executive aspire for an effective government and the need for a president who possesses broad constitutional powers to uphold the nation’s security. In this landlocked and battle-weary country the president, in fact, holds the essential responsibility in the conduct of domestic and foreign affairs. As a result, the independent functioning of legislative and judicial institutions is largely reduced to presidential decrees. Armenia does not have a system of checks and balances, a system of government that works and balances itself. Specific limitations on the legislative role of National Assembly are illustrious in Chapters 3 and 4 of the Constitution. A notable limitation is the presidential dissolution of the National Assembly “if the National Assembly does not give an approval to the program of the Government two times in succession within two months.” (Chapter 4, Article 74, clause 1) Three other clauses in the same article also authorize the President to dissolve the National Assembly.

Within the executive institution itself, the system of collective leadership – typically found among cabinet members who share leadership responsibility as a group – is incompatible with centralized presidential authority and inconsistent with policy practices in Armenia. The president is not first among equals; rather, he is the person in charge. Cabinet members, or the Government as stated in the constitution, are presidential appointees, serving at the president’s wish. Power is exercised on a daily basis mostly by appointed government officials who are far from being accountable to the public. The precarious fortunes of the people, both the masses and organized groups, are a reminder of the omnipresent elitism of the Armenian political system. As a consequence, politics in Armenia remains limited to the elite preferences and largely neglects the multiplicity of social and economic needs of the populace.

The essential element in understanding the Armenian society is the existence of multiple factions of social forces and organized groups. Close to 4000 registered NGOs (Non-Governmental Organizations) and interest groups and some 80 political parties are active in a country of 3 million. It is a system of pluralism in which the general public consists of many groups operating in different spheres of life. Various groups representing different objectives and views compete for influence throughout society and the government.

This very nature of pluralism in Armenia advances the ARF argument for a parliamentary form of democratic politics. It is persistently debated that people can gain greater experience of sovereignty vested in them and is exercised by them either directly or through representatives chosen by them. The decentralization of authority and influence among groups with various goals is perceived to be conducive to the parliamentary form of democratic practice in which group and individual rights do not succumb to the elite rule. This also can give rise to a constant dynamic relationship between the populace and the government rule.

Notably, in the absence of a parliamentary system, not all Armenians are part of this democratic practice and have poor membership in different groups (the average membership of each NGO is 10 persons, and party identification in general is very loose), nor are people’s beliefs represented by different organized interests throughout the Armenian society. Ironically, the multiparty system is constitutionally established (ideological pluralism and multiparty system are recognized in Article 7 of the Constitution) and there is a general public recognition that the large number of socio-economic organizations could easily tame the elite power, secure the consent of the people, and shape the parliamentary system in the country.

ARF has long recognized that the institutions of the state are likely to be stronger in a parliamentary system, since it can genuinely reflect the pluralist nature of the society. In contrast and as argued by the ARF, in a homogenous or ‘mass society’ in which group activity and interests are limited, there is the risk of authoritarian and oligarchic type of domination. A mass society behavior was clearly evident during the May 2012 parliamentary election when the people’s votes were easily swayed. The mass or homogenized society has been vulnerable to political domination, destructive of democratic institutions, and has invited authoritarian style. The integrity and stability of the Armenian political culture is contingent upon significant number of groups and associations genuinely functioning between the individual and the greater values of the society at large.

The ARF platform is attuned to political pluralism in Armenia which is founded on the existence of competing groups and representing diverse views. In this system, the necessity to form parliamentary coalitions across a number of parties and groups stems from the attempt to produce positive and incremental changes rather than coerce presidential style and unilateral policy decisions. The need to involve and placate all groups and interests means that only rarely can there be a major and shocking change if the policy change is to be constructive and useful. A gradual and all-inclusive pattern of change is likely to provide stability and limit the errors that might result from more abrupt shifts in policy. Social programs extended to plurality of the society, as ARF argues, enhances steady development process through incremental change and maintains stability.

This is important for Armenia, because the rise of unorganized and mass society in the post-Soviet era promoted too much neo-liberal freedom and too much potential for abrupt change with too little order. Competing groups representing diverse interests seem to be necessary to create the barriers between the emerging leadership and the mass public, and are essential factors to prevent the rise of oligarchic elites. Genuine representation of pluralist society in a parliament provides a balance between the demands of civil liberties and order.

It is generally true that the basic policy characteristic of steady and incremental change has been a norm for stability, but considering the predicament of about 60 percent of the people in Armenia, and notably in some fundamental areas such as housing, social welfare, livable wages, health care, and transportation, most Armenians have expressed that they would like some significant and drastic changes from the status quo. The existing public policy in Armenia appears to produce little if any of the desired changes. The increasing divide between the elite and the public has made change increasingly difficult. To establish a parliamentary authority responsive to the people, as ARF argues, is a significant step forward to overcome this difficulty.

Razmig B. Shirinian is a Professor of Political Science at the College of the Canyons.