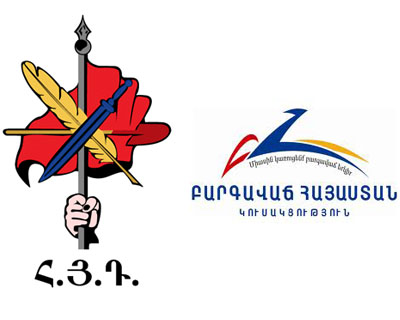 On November 10, Prosperous Armenia Party Parliamentary Faction’s Secretary, Naira Zohrabyan and MP Vardan Oskanyan met with ARF-D Supreme Council’s representatives, Armen Rustamyan and Arsen Hambartsumyan at the party’s “Simon Vratsyan” premises. Rustamyan said that this was an initial meeting for the parties to present their views.
“Naturally, our assessments are very close. During the meeting, we found that it is important to do everything necessary to enhance the ideas that unite us and then we will talk about the tactical steps that we have to take. Generally speaking, the first meeting was quite promising. That gives us the opportunity to co-operate on the basic points that we presented during ARF-D Supreme Council’s earlier press conference, reach to an agreement and move forward” Rustamyan said.
Asked if there is a possibility for other political forces to unite as well, Rustamyan replied that it remains to be seen. He highlighted that ARF-D’s platform is the roadmap to get Armenia out of the situation she is in and that the party has been long talking about that. He argued that the platform is comprised of both the necessary and sufficient steps in that direction. “The implementation of these steps in a short period of time can lead us to the kind of country that we all dream of” Rustamyan said. He added that this is the most crucial phase and if it forms into a public demand then no power, regardless of who that is, can avoid taking it under consideration. “This door is open to everyone. The larger the consolidation around our platform, the bigger the prospective to solve the issues” Rustamyan concluded. 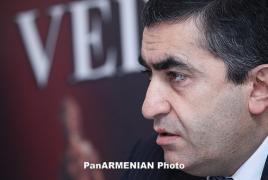 (FIRST NEWS AND ANALYSES, November 11) The PAP and the ARF with their decisions on shifting the electoral system to a 100% proportionate one are trying to influence the upcoming presidential elections. It Is not clear, though, what aim they are chasing. Both the PAP and the ARF have proposed similar options for the benefit of making the country a parliamentary one and this might be viewed as either a step to draw the mass media attention towards them or a justify their decision on choosing a candidate for the presidential elections.

The First News and Analyses talked to ARF representative Armen Rostomyan about the current developments. He had previously expressed his opinion on boycotting the presidential elections and to the question whether he had previously agreed his view with other coalition powers, he answered it was not. They have started elaborating their plan with 7 points and the boycotting used to be one the options to reach the power change and that it was excluded from these points. Armen Rostomyan spoke about the similarity of views between the ARF and PAP proposals on the upcoming presidential elections and reminded they have 7 points while PAP presented only 2. No official announcement on the ARF side from the PAP has been made so far and today they will be discussing these issues during the meeting. ARF member also mentioned the party is not aimed at making someone a president, instead they are interested in a leader that would be responsible for the implementation of the 7 points they have. To the argument that the PAP and ARF have made a coalition on the eve of the parliamentary elections based on their initiatives, Rostomyan stated their cooperation includes a larger spectrum and believe the package they have proposed is fully capable of solving the problems the country faces today.

Rostomyan concluded with the negation of the fact that Kocharyan was standing behind the ARF and PAP proposals and stated they had had these ideas since they were supporting Kocharyan and that the latter made a couple of ameliorations towards the fulfillment of these points and granted larger powers to the NA but it was not enough. Only in case of the complete accomplishment of the 7 points the ARF has proposed there can be a change in the country.