STEPANAKERT—The speaker of the Uruguay Parliament Jorge Orrico traveled to Artsakh (Mountainous Karabakh Republic) and met with President Bako Sahakyan and other officials, reported Armenpress news agency.
Orrico was greeted in Stepanakert by a large crowd of residents who welcomed this first high-level foreign official to visit Artsakh outside of the OSCE Minsk Group officials, who are tasked with finding peaceful resolution to the conflict. 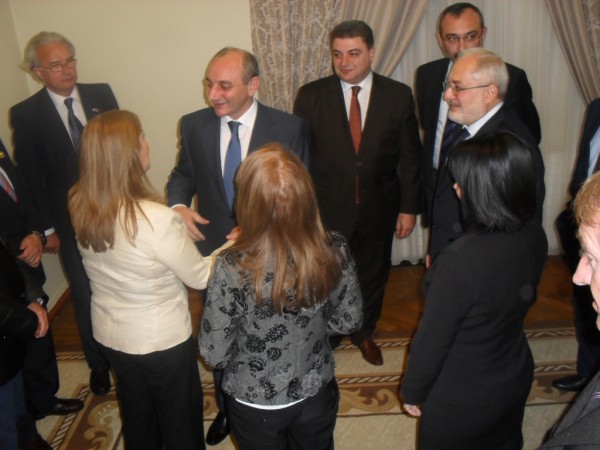 Uruguay Might be First to Recognize Artsakh
Uruguay parliament foreign relations committee member Rubén Martinez Huelmo, in response to a journalist’s question about Uruguay being the first to recognize the independence of Artsakh, said: “I can honestly say, theoretically, YES,” reported the Stepanakert-based Aparaj newspaper.
He added that “this is political process and it must develop step by step.”
“Visiting Artsakh is not such a bold move, it merely a step. We are friend with the Armenian people. We must especially stress the role the ANC office plays in fostering Armenia-Uruguay relations,” added Huelmo. 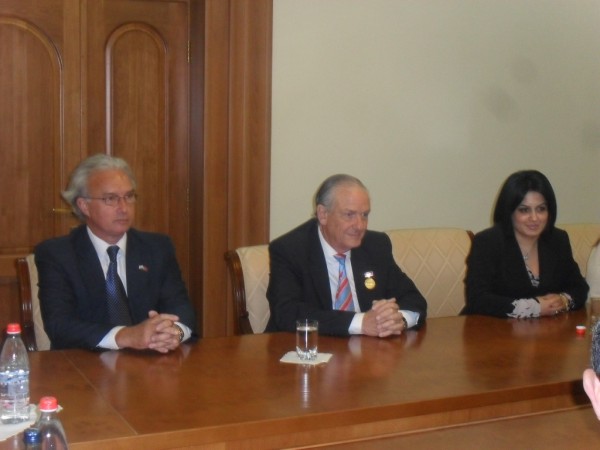 During the meeting with Sahakyan and his staff, development of bi-lateral relations with Uruguay was discussed.
Sahakyan emphasized that Artsakh and Uruguay are friendly nations, which possess many shared characteristics including their history, their government philosophy. These characteristics, Sahakyan said, are beneficial for development of relations between the two countries.
President Sahakyan praised Uruguay’s role in the international recognition of the Armenian Genocide, as well as that country’s balanced approach to the recognition of Artsakh and Karabakh-Azerbaijan conflict resolution process.
The two leaders emphasized the imperative for strengthening relations and the need for concrete steps to achieve this goal.

Armenianow.am reports “Head of the Information Department of the Presidential Administration of Karabakh David Babayan has stated: “The meeting was held in a warm and friendly atmosphere. The sides discussed cooperation between the two countries.” After the meeting, Babayan said that it signified the beginning of a new stage in Karabakh’s foreign policy. “We are interested in developing relations with other countries and it is not conditioned by other issues, in particular, those related to recognition. Recognition is a key issue on Karabakh’s foreign policy agenda, but it is not an obsession,” said Babayan. In fact, Karabakh has set out to improve relations with other countries without requiring recognition. Though, good relations and economic ties are the best way of recognition. And the visit of such a high-ranking official of Uruguay is already a recognition of sorts.

According to Karabakh’s presidential spokesman Babayan, the NKR President noted during the meeting with the visiting Uruguayan official that the relations between Karabakh and Uruguay in various fields should be brought to a new level.

The ARF-D and Armenian National Committees have been conducting active work on the recognition of the NKR and developing its ties with other countries. It was through the efforts of this traditional Armenian party that this year Karabakh was visited by parliamentarians of France, Switzerland and other countries.” 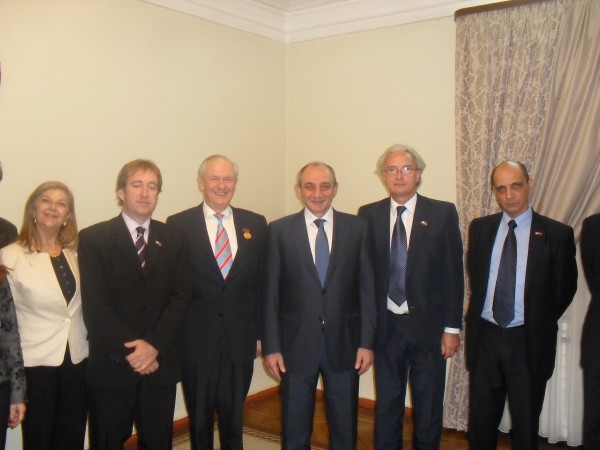 Orrico is on an official visit to Armenia at the invitation of Armenia’s Parliament Speaker Hovik Abrahamyan. The Uruguay official visited Dzidzernagapert memorial monument and held meetings with officials. Uruguay was the first country to recognize the Armenian Genocide in 1965.
In September, 2011, in an unprecedented announcement the Foreign Minister of Uruguay Luis Almagro said that his government has begun the process to make an official announcement regarding the status of Mountainous Karabakh, reported Asbarez.
“Today we are looking into the issue [Mountainous Karabakh] in order to present an official government position on the matter,” said Almagro at the time. “I am personally convinced that Mountainous Karabakh is part of historic Armenia and it must be independent and in a short while be unified with Armenia. This is the only resolution to the Artsakh issue.”
Almagro was speaking at conference in Uruguay’s capital organized by the Armenian National Committee of South America and the Uruguay-Armenia parliamentary group marking the 20th anniversary of the Armenia’s Independence, highlighting Uruguay-Armenia relations.
Hovhannesyan, who was in Montevideo at the time of Almagro’s announcement, welcomed the statement calling it unprecedented.
“For the first time, a progressive and democratic country such as Uruguay is officially expressing a position, which reflects the posturing of the ruling political forces,” said Hovhannesyan in 2011, who stressed that the process will take some time.
“I’m honored to represent the country, which was the first to recognize the Armenian Genocide,” Orrico said, speaking at Tuesday’s Armenian National Assembly session.
Armenia and Uruguay have a number of similarities: both are small states surrounded by large countries, Orrico said.
Orrico recalled that Uruguay was the first country to recognize the Armenian Genocide and began the process of international recognition of the Armenian Genocide.
“We are the grandsons of those Uruguayans, who opened their hearts in 1915 to accept the persecuted peoples. We are honored to be the first to accept the Armenian Genocide by law. It happened on April 22, 1965. I would like to note that we have an Armenian Genocide museum in our country and every year on April 24 we hold commemorative events at the Chamber of Representatives. We are a piece of Armenia in South America,” said Orrico.
“We are an open country and are trying to become the most democratic in our region. If there were just a few countries Uruguay was cooperating with several decades ago, today it has economic relations with over 120 countries of the world and is proud of the steady economic growth for nine years in a row and an attractive investment climate,” explained Orrico.