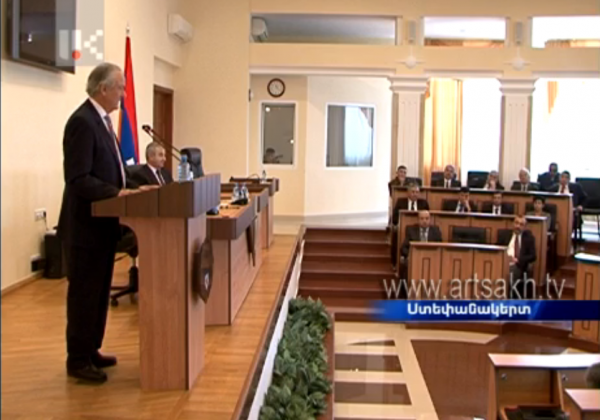 On November 14, the Parliament of Mountainous Karabakh hosted the delegation of Uruguay’s House of Representatives, headed by the House’s President, Jorge Orrico mentions a MK Parliament’s press release. The Uruguayan delegation met with its counterparts of the Mountainous Karabakh Parliament; attending the meeting were also members of the MK government, the Supreme Court’s Chair, the Human Rights Defender, other government and state officials, members of the Parliament’s staff and journalists.
MK Parliament’s Speaker, Ashot Ghulyan, offering the opening remarks warmly welcomed President Orrico and MPs, Rubén Martinez Huelmo, Ricardo Planchon, Richard Sander and Daniel Radio and their accompanying team.
Ghulyan reminded that Orrico represents a far-away country which has almost a century-old friendship ties with the Armenian people. He said “it is only with profound gratitude that we have to note that Uruguay has been one of the first states in the world, who driven by purely humanitarian motives and with unique care, gave shelter to the thousands of our compatriots, survivors of early last century’s 1915 Genocide, perpetrated in Ottoman Turkey and provided them the opportunity to start a new life on its hospitable land and to live in safety and in dignity”. The Speaker highlighted the active role the Armenian community in Uruguay has played over the years in the process of the social-economical and cultural development of the country and which has been acknowledged many times by the state’s leaders as well as figures of the civic and political life.
In this context, the Speaker of the Parliament emphasized on the fact that Uruguay has been the first state in the world to formally recognize the Armenian Genocide in 1965 hence initiating the process of the international recognition and condemnation of the 20th century’s biggest crime, addressed against humanity.
At the same time, the Speaker pointed out, that Uruguay, on May 27, 1992 was one of the first states that recognized and established diplomatic relations with the independent and sovereign Republic of Armenia and drew a parallel between the 20 years of Armenia’s independence and the 20 years of those relations. Finally, Ghulyan said that Uruguay is one of those countries where the Artsakh people’s liberating struggle, the will to self-determine its life, the giant efforts made for this purpose, the apparent achievements in the direction of building a statehood were met with sympathy. Ghulyan said that the the proof of that warmth expressed by Uruguay, is the visit to Artsakh of the delegation of the House of Representatives headed by its President, Jorge Orricon as well as the holding of this meeting.
In his turn, President Orrico said that it is very pleasant for him and his colleagues to be in Mountainous Karabakh Republic and to the Parliament and that they all feel obliged by the warm greeting and hospitality. Orricon presented geographical, geopolitical and demographical facts about Uruguay. In particular, speaking about the Armenian community of Uruguay he said that Armenians started immigrating there in the beginning of last century, after 1915, as a result of the Genocide. He pointed out that Uruguay was among the eleven states that in 1920 voted for the adhesion of Armenia in the League of Nations and said that this is a proof that are behavior towards Armenian, is a message that was passed on to them by their ancestors. “In reality, the fact that in 1965 Uruguay recognized by law the Genocide of the Armenians, is a message from our ancestors that was realized by the generations that followed. And every year, on April 24, we assemble at the Parliament and commemorate the Genocide. We do that out of respect for the memory of the victims” he added and mentioned MP Huelmo’s initiative to open a museum for the Genocide. “We are always devoted and support freedom. We are well aware of the situation here. Our Foreign Affairs Minister has already made a statement about it. Our government doesn’t have an official opinion on it, for the time being. We are in favor of the peaceful settlement conflicts and we are ready to cooperate over any subject that is directed in that way” Orrico said. He concluded by thanking for being in Mountainous Karabakh and saying that he feels honored and respected. “If you need our help, we are ready to support you” he said.
In his closing remarks, MK Parliament’s Speaker, Ashot Ghulyan said that this is a landmark day in the MK Parliament’s history and that this is the beginning of a new process that will certainly be continued. Ghulyan also thanked all those who contributed in the arrangement of this visit, especially ARF-D Member of the Parliament of Armenia, Vahan Hovhannesyan, Armenia’s Ambassador Extraordinary and Plenipotentiary to Argentina and Uruguay, Vahagn Melikyan, the representatives of the Armenian National Committee of Uruguay Diana Etutmazian, Arpi Hochachanian and Armenian-Uruguayan businesseman Armen Zeitoutian.
Later, the delegation visited Khachatur Apovyan school, in Shushi and participated in the presentation of the Nur program. After that, they visited Gandzasar monastery.