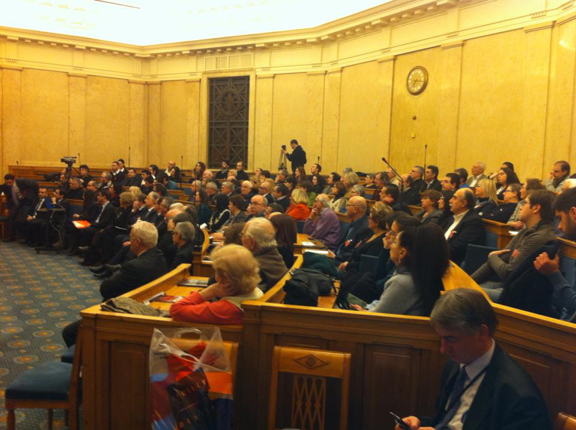 Attendees at the commemoration event that took place in the National Assembly of France.

(asbarez.com, February 27, Paris)—The Armenian National Committee of France has filed a lawsuit against the two Azeris who incited a brawl Tuesday at the French National Assembly during an event commemorating the 25th anniversary of the Sumgait Pogroms.

“We have filed two criminal complaints, the first initiated by a young French-Armenian, a victim of assault, the second by the Director of ANC-France, organizer of the event,” said Sevag Torossian, an attorney representing the ANC –France.

A photograph taken at the time of the attack, corroborated by several witnesses shows that the attacker was aiming to punch Hratch Varjabédian, Director of the ANC-France, who asked the Azeri who had infiltrated the event to take their seats and stop chanting hateful and offensive slogans during the observance of a moment of silence in memory of the Sumgait victims.

“The suit has been filed. The Prosecutor should determine the conditions under which these two people, whose names were not on the list of guests sent to the administration by the ANC of France, could have entered the National Assembly,” said a statement by the organization.

“The Prosecutor should also clarify why a diplomatic delegation of Azerbaijan was curiously at the scene moments after the attack, not to mention the presence of Azeri journalists with cameras,” added the statement.

“The diplomatic representation of Armenia, for its part, made all the necessary arrangements with official bodies and strongly condemns this provocative premeditated and orchestrated by the Embassy of Azerbaijan,” concluded the statement.

The event, co-sponsored by French Parliament member François Rochebloin and was attended by several parliament members, was organized by the ANC of France to commemorate the 25th anniversary of the Azeri pogroms in Sumgait. 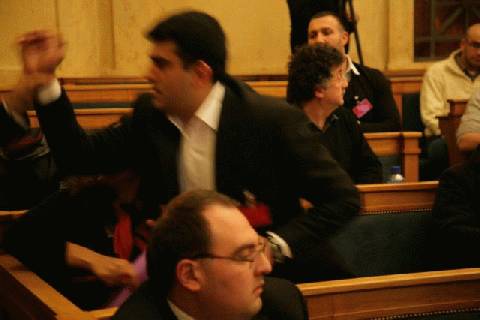 French National Assembly member and author of a bill criminalizing the denial of the Armenian Genocide in France, Valérie Boyer, who was present at the event called the incident “provocation and denialist propaganda.”

“This latest provocation once again proves that Azeris are not interested in peace or the resolution of the Karabakh conflict. I ask [French President] François Hollande to seek diplomatic measures to end all denialist and hateful acts on French soil,” said Boyer.

The Coordinating Council of Armenian Organizations in France (CCAF) said Azerbaijan was trying to export its anti-Armenian racism to the French Republic through inciting such acts.

“The country’s president Ilham Aliyev has repeatedly stated that Armenians around the world are the Azeris’ number one enemy,” explained the CCAF.