(armenianweekly.com, WASHINGTON)—The Chairman of the U.S. House Foreign Affairs Committee, Ed Royce (R-Calif.), joined with fellow members of the Congressional Armenian Caucus and the visiting Minister of Youth and Culture from the Republic of Nagorno Karabakh, Narine Aghabalyan, in a bipartisan Capitol Hill celebration on March 13 marking the 25th anniversary of the Artsakh democracy and freedom movement. 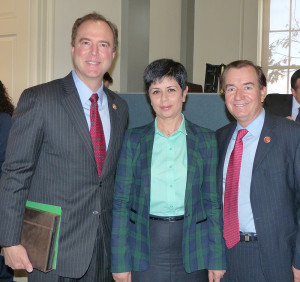 “Nagorno Karabakh is all about freedom. Freedom was the inspiration for the Nagorno Karabakh democracy movement back in 1988. Freedom has been the cornerstone of this proud Republic’s remarkable growth over the past quarter century.  And, today, twenty-five years later, freedom remains the key to finding a peaceful and democratic way to finally bring an end to Azerbaijan’s aggression,” said ANCA Executive Director Aram Hamparian.  “We would like to thank Minister Aghabalyan for joining with us today, and to all our Congressional friends, from both sides of the aisle – including, of course, Foreign Affairs Committee Chairman Ed Royce and our new Republican Co-Chairman of the Armenian Caucus, Michael Grimm – for celebrating the awesome power of freedom, for America, for Artsakh, and for all the peoples of the world.”

In her remarks, Minister Aghabalyan explained that: “The Nagorno Karabakh Republic is a legal state, which was created through the free expression of the democratic will of the people of Karabakh, and it is, in fact, the non-recognition of this state that contradicts international laws and norms. Our unrecognized status prevents the full realization of the rights of the people who live in Artsakh. It is appropriate to cite the words of the third President of the United States, an outstanding public figure, Thomas Jefferson: ‘Everything is changeable in the world except the natural rights of people.’”

The English-language text of Minister Aghabalyan’s remarks are available here.

Rep. Grimm, the newly announced Republican Co-Chairman of the Armenian Caucus, reflected on the growing international support for Karabakh’s independence.  “If history has furnished any conclusion, it’s that Nagorno Karabakh’s assertion of independence is hardly a fleeting or temporary desire, it’s actually an ancient and salient aspiration that must be part of any permanent resolution if the avoidance of future conflict is going to be a serious goal,” explained Rep. Grimm.  “And I believe that realization is gaining increasing traction in the international community for it is the only realistic solution to resolve the dangerous status quo of Azerbaijani and Armenian border guards locked in a stand-off with that fragile 1994 ceasefire square in their cross-hairs.” 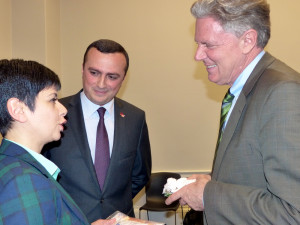 Rep. Pallone concurred, noting that “There are those on the other side that keep insisting that somehow the principle of self-determination should not be supreme – and it should always be. . . Karabakh is an independent republic, it should be recognized as such. Any ultimate negotiation through the OSCE Minsk Group or through any other means has to provide for the right to self-determination of the people of Artsakh, either to remain as an independent country or to join with the Republic of Armenia, if that’s how they see fit.”

“It’s been entirely too long, and too many people have died since Nagorno Karabakh voted for independence,” said Chairman Royce.  “We believe it is time for peace.  We believe it is time for the angry rhetoric to cease.”  Condemning the Safarov scandal, Chairman Royce noted, “You can only have peace when you have sincerity of intent on both sides.  And what we are asking is that there be a reflection on the actions that Azerbaijan took to elevate, and commemorate and celebrate the murder of another human being by an axe-murderer.”

“Safarov’s rapturous welcome in Baku is testament to the degree of anti-Armenian hatred that is being incited in contemporary Azerbaijan.  That a man, who nearly decapitated a comrade, in his sleep, could be treated as a national hero is so inexplicable and appalling, it vindicates the concern of many Armenians that the forced imposition of Azeri sovereignty over the free people of Artsakh would result in a blood bath,” stated Rep. Schiff, who went on to call for the zeroing out of all U.S. military assistance to Azerbaijan.  “By cutting off military aid to Azerbaijan, the U.S. can signal its disgust with the Safarov affair but also remind Aliyev that the U.S. will not tolerate any acts of aggression against Armenia or Artsakh.”

In her address, Rep. Eshoo stressed that: “This milestone for the people of Nagorno Karabakh holds particular meaning for me as an Armenian American.  Nagorno Karabakh has faced much difficulty in its history, but its continued push for growth and democracy demonstrates the determination of its people to progress beyond intolerance and violence.”  Rep. Speier’s message underscored Nagorno Karabakh’s progress, noting that: “the Armenians of Nagorno Karabakh have fought back against attacks on their institutions, their livelihoods, and their very right to exist, and against all odds they have succeeded in creating a democratic society with a vibrant culture and an enduring respect for the pursuit of peace and justice.”

Armenia’s Ambassador to the U.S., Tatoul Markarian and the Representative of the Nagorno Karabakh Republic in Washington, DC, Robert Avetisyan both offered policy-driven remarks on the part of their government.  ANCA Executive Director shared the Armenian American community’s enduring support for Artsakh’s national and democratic aspirations, as manifested through a broad array of federal and state-level advocacy initiatives undertaken by the community to support and sustain the Nagorno Karabakh Republic.

Ambassador Markarian, in his speech, said that: “By revising reality and cultivating anti-Armenian hatred, Azerbaijan is seeking to prepare the moral ground, both domestically and internationally, for restarting the war against Nagorno Karabakh.”  He went on to explain that, “Azerbaijan is just buying time for preparing a new war, which underscores the urgency of the recognition of the Nagorno Karabakh’s independence by the international community.”

The standing-room-only event was well attended by a diverse array, representing a broad range of Washington, DC foreign policy community, as well as by Armenian American leaders and activists from throughout the national capital area and around the nation.

Minister Aghabalyan, a journalist by trade, represents an energetic new generation of leaders who are charting a bright future for the independent Republic of Nagorno Karabakh. As a senior government official, she has played a pivotal role in the revitalization of Shushi as a cultural center, and the new location for the Youth and Culture Ministry. Her practical focus on the development of literature, theater, and other areas for the arts has helped spark a renewed interest in public-private partnerships, and her Ministry’s job-placement efforts are finding meaningful work for young citizens of the Republic.

The ANCA has, in recent days, distributed a “Who is Ilham Aliyev” one-pager to legislative offices, outlining the Azerbaijani President’s well-documented record of intolerance, violence, and corruption.  To view this document, visit: www.anca.org/whoisaliyev.

A thirty-second ANCA video was released this week, titled “Americans to Aliyev: Violence is not a U.S. Value,” juxtaposing Azerbaijani Parliamentarian Samad Seyidov’s claims of that country’s commitment to “tolerance, secularism, fighting against fundamentalism, democracy…” with images of brutal Azerbaijani police crackdowns against dissenters.  The video is available on the ANCA YouTube page at: http://www.youtube.com/watch?v=obFly5M5nGg

In an attempt to export Baku-style repression to Washington, DC, a handful of pro-Aliyev protesters outside the event sought unsuccessfully to discourage participation in the Artsakh freedom celebration.