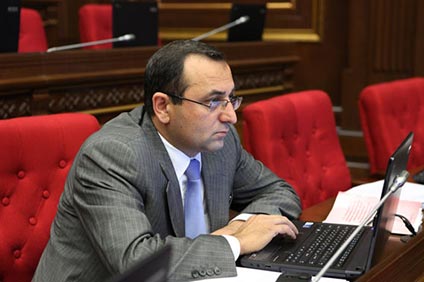 Aravot.am reports that on March 18, the Central Electoral Committee Chairman, Tigran Mukuchyan presented the May 6, 2012 parliamentary elections report to the Parliament. ARF-D MP, Artsvik Minasyan said that “It is not a secret that during the parliamentary elections state officials were actively preoccupied with campaign work. Many public statements have been made about it by observers and by local media as well. However there is no reference about this issue in your report. Do you not feel the necessity of elaborating those statements or are you satisfied with just the appeals and protests you received?”. Minasyan was referring to the violation of the 22nd article of the Election Law.
The ARF-D MP also asked whether Mukuchyan is prepared to suggest changes in the Law since it was shown during the recent presidential election that the state resources were widely used in favor of the ruling political power.
Mukuchyan replied that he was not able to make any presentation on that matter because he had to give detailed explanations at the Constitutional Court. According to him there was no violation of Article 22.
Minasyan responded that no violation of Article 22 would mean that all relevant reports, articles of the Press and international observers’ announcements do not comply with reality. The CEC chairman said that it should be taken under consideration the extent of the affect any violation has on the election results.