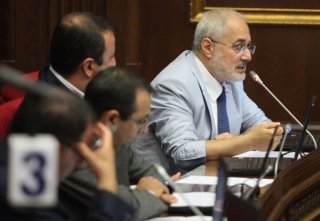 (armenianweekly.com) – In a statement issued on April 8, the parliamentary bloc of the Armenian Revolutionary Federation (ARF) announced that it would not participate in the parliamentary session dedicated to President Sargsyan’s inauguration.

In its statement, the parliamentary bloc noted that the presidential regimes that have concentrated power in their hands have undermined the statehood and national unity, ignoring injustices, poverty, social polarization, emigration, and loss of confidence in the leadership and future.

“Despite these realities, the authorities remain unresponsive to the popular demand to conduct structural, radical changes,” read the statement.

The Armenian National Congress and Hovannesyan’s Heritage Party will also not tale part in the said parliamentary session.

Sargsyan will take oath to office on April 9. In parallel, a large rally will be held in Freedom Square where opposition leader Raffi Hovannesyan, who argues that it was he who won the presidential election, is also expected to take the presidential oath.

The obstacles blocking the establishment of justice in the country, the citizen’s right to live freely and the rights to work and to create, the alarming poverty and social polarization, the upgraded to threat-level emigration, the non-adequate trust inspiring election and despotic presidential systems undermine the people’s belief and confidence for the future, exhaust national unity and weaken the Armenian statehood.

Despite these realities, the authorities remain unresponsive to the popular demand to conduct structural, radical changes. Unfortunately political circles as well, do not perceive this demand sufficiently. We are confident that the exit from the current state of affairs is the Armenian Revolutionary Federation’s proposal of going to radical and deep reforms under a joint political agenda of both the ruling power and the opposition. By assessing the existing situation, the authorities have the obligation to familiarize with this universal imperative about radical and systemic changes.

Considering all these, the ARF-D Faction of the National Assembly of the Republic of Armenia, states that

1. It will not participate in the April 9, 2013 special session of the National Assembly dedicated to the inauguration ceremony of the President of RoA,

2. It will adopt an equivalent stance in case the regime expresses political will and takes practical steps in the direction of realizing radical and deep reforms.